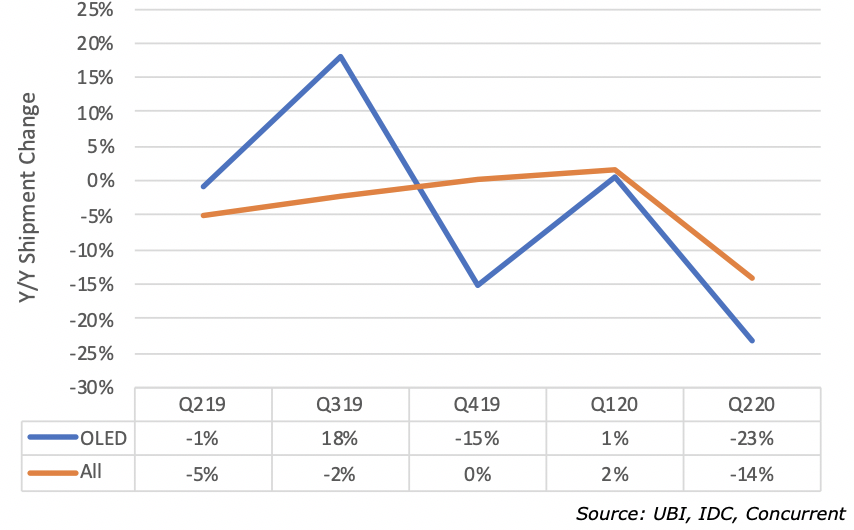 The next tables show the Q220 smartphone shipments for the industry, China, US and India. All regions were down Y/Y, but India suffered the most loss with a 51% Y/Y drop in shipments.

Strategy Analytics (SA) reported that Samsung Electronics, 2nd in shipments was third in Q220 market share based on smartphone revenue. Apple retained its #1 position. Huawei, which was #2 in smartphones shipped in Q220 was 2ndin revenue This is the first time Samsung Electronics, which has been competing Apple for the first place, placed below second place since the second quarter of 2011. Samsung Electronics’ revenue in the second quarter was around $13 billion down 26% Y/Y. The Galaxy S20, did not meet Samsung Electronics’ sales expectations. The largest percentage of the company’s revenue came from its entry models as mid-range and low-end smartphones were the most popular models throughout the global market. Although it was able to maintain its profitability with its cost reduction efforts, it could not keep its revenue from falling due to a 27.4% drop in shipments. China buyers supported Huawei in reaction to the U.S. Government’s sanctions also helped raised Huawei’s market share. 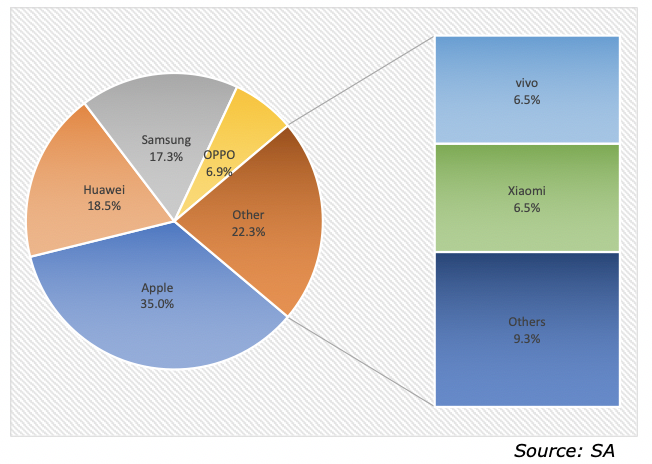 Huawei’s revenue was around $14 billion down 4% Y/Y. It was able to minimize further loss in revenue as China was able to recover from COVID-19 faster than other countries. Huawei’s smartphone shipments in the second quarter, were 54.1 mi units. It was able to absorb a significant part of demands for 5G conversion within the Chinese market by introducing many new products that support 5G. The ranking is likely to be a single event, given the additional restrictions imposed by the U.S. Government. Apple had revenue of $26 billion, a small increase Y/Y. Although its retail sales and production were down early in the quarter, the introduction of the popular iPhone SE  helped overcome the slow start. Average smartphone prices for the three leaders were: 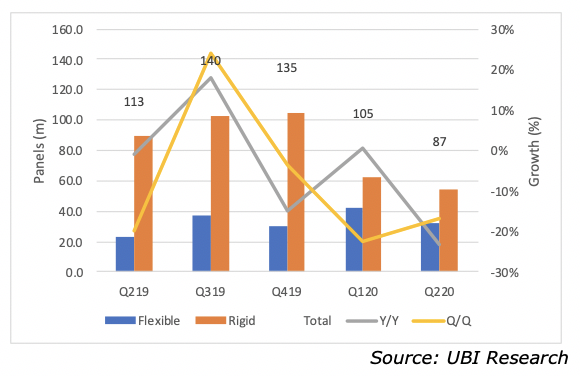 The drop in rigid OLED panel shipment was caused by Chinese smartphone makers producing less mid-tier smartphones during the quarter, as they focused on flagship smartphones however, which helped shipment of flexible OLED panels grow.
Shipments of all OLED panels, which includes those for TVs and PCs, stood at 170 million units during the second quarter down 16.6% Y/Y and  down 13.4% sequentially

Figure 4: OLED Panel Shipments and Overall Growth, Smartphones and Others 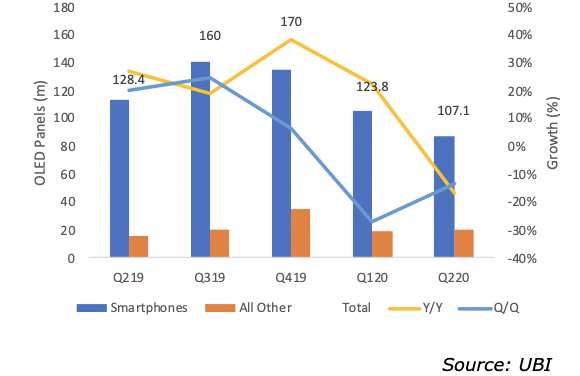 ​The COVID-19 pandemic that effected all end-product sales was the cause, the research firm said. The major Chinese OEMs used OLED panels for their flagship smartphone models. Chine flexible panel makers offer their panels at 60% of the price the Samsung Display price, even as Chinese panel maker have ~1/2 the yield of Samsung. From: THE ELEC, Korea Electronics Industry Media(http://thelec.net)