Counterpoint Research’s recently published Global Smartwatch Model Tracker indicated Apple maintained its leadership position, recording a 50% YoY increase in the demand for the new Series 6 models. As a result, Apple market share climbed 3% points. Samsung’s shipments rose 27% Y/Y, with the popularity of the Galaxy Watch 3 and Galaxy Watch Active series. But the company’s growth was below the market average and it saw a small dip in its market share. Huawei continued to lose share compared to a strong quarter a year ago. These volumes include basic smartwatches with low-level proprietary OS or RTOS (like from Xiaomi and OPPO), kids smartwatches (like from BBK, Huawei and Vodafone Neo) and high-level smartwatches (like from Apple, Samsung and Garmin).

In terms of smartwatch OS platforms, Apple’s WatchOS captured more than a third of the market with a growing attach rate to its base of billion iPhone users. Google’s Wear OS has not yet achieved such success in smartwatches. This is because most of the major smartwatch brands have developed and installed their own proprietary OS (like Fitbit OS, Tizen and Garmin OS). Further, Wear OS has been lacking behind in terms of features, battery optimization and chipset support. This has limited its share to a mere 4% of the global smartwatch market. 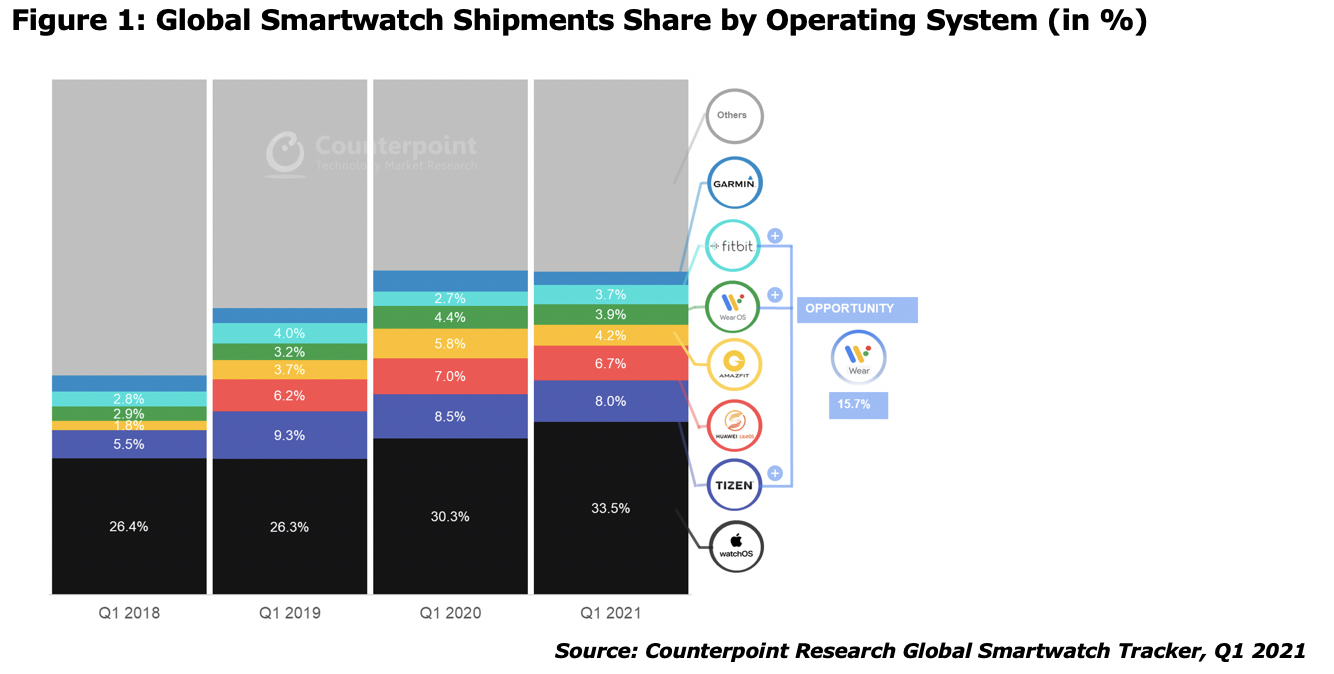 ​This trend is expected to change soon considering the Google-Samsung partnership announced at the Google I/O last week. Google will integrate Tizen OS with Google Wear OS to reinvigorate the market and go full force after the 3.5 billion Android user base. Google’s new Wear platform will be shipping in the next generation of the Galaxy Watch series in late Fall. Samsung will be able to better target the broader Android smartphone user base. With the completion of the acquisition of Fitbit, Google should be able to enhance the Wear platform with ‘fitness’ capabilities and services integration, moving forward.”