Vertical Divider
But …. When the Chinese reach full yields and performance, they will be in a position to severely undercut the Samsung price lowering their margins. LG is facing a different challenge from Gen10.5 fabs, which will be twice as efficient in producing 65” and 75” panels than LG’s Gen 8.5 fab, further distancing the price differential between OLEDs and LCDs. The next two tables show the impact of BOE’s Gen 10.5 on 65” and 75” production in late 2018 and early 2019. And they are just starting the ramp-up. BOE and CSoT will add 3 additional Gen 10.5 fabs over the next 3-years, so the volume for these 65”/75” displays could quadruple.

Source:IHS
LG has been planning a Gen 10.5 OLED fab to respond to the competitive threat, but they could be 2-years behind BOE. BOE and CSoT are also planning to dedicate a percentage of their 2ndGen 10.5 fabs to OLEDs, but timing is likely to be after 2022/3. 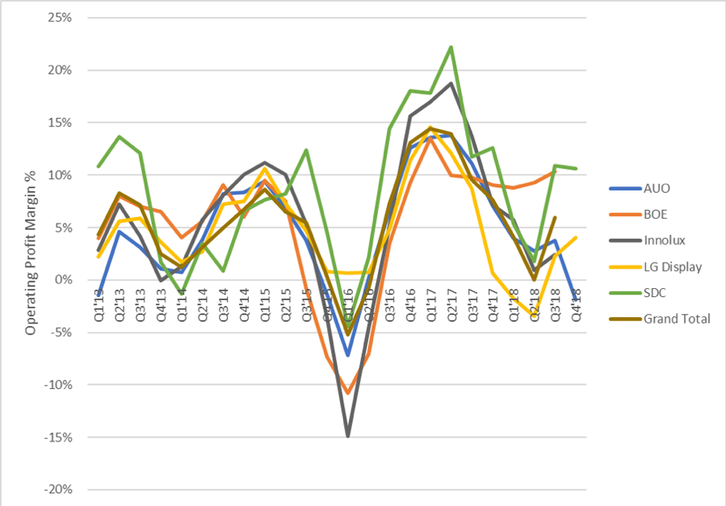 Source: DSCC
​
The Chinese government is disintermediating the Korean oligopoly on OLED displays by funding up to 55% of the capex, reducing the risk so now it is up to the Chinese panel makers to perform.  If they are capable, they will control both the LCD (low margin) and the OLED (high margin) components of the display industry. If they treat OLEDs, the way they have treated LCDs, capacity will grow faster than demand, prices will drop, and the crystal cycle will drag on. The additional supply could spur OLED display sales and greater penetration into markets, such as automotive, notebooks and monitors. 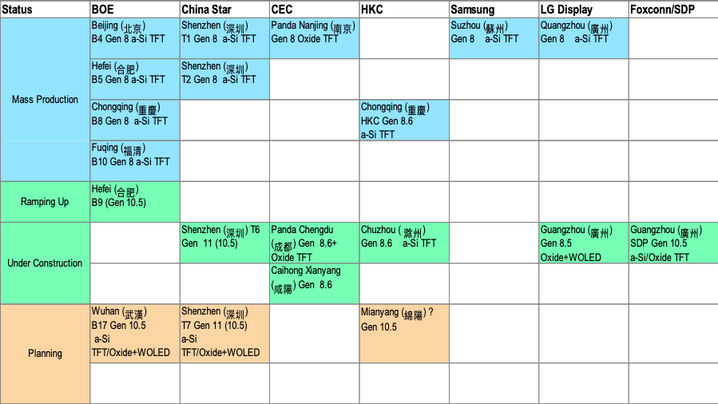 Source: IHS
​
​Moreover, China’s funding of the capacity is set apart from the approach used in the rest of the world. While companies building outside China fund the fab using internal capital, partnerships or loans, the China panel makers get anywhere from 3% to 55% of the capex for the fab as shown in the next table. Government support takes most of the risk out of the planning process and substantially reduces the panel cost by shifting depreciation off the panel makers books. As such, at least in the short to medium term, China’s panel makers have a significant advantage over fabs built in other countries. The advantage is mitigated when new technology, such as OLEDs, cannot be brought to MP in a timely manner, but for LCDs the Chinese have a distinct advantage.
​Table 3: Breakdown of Investor Participation in China’s Fabs 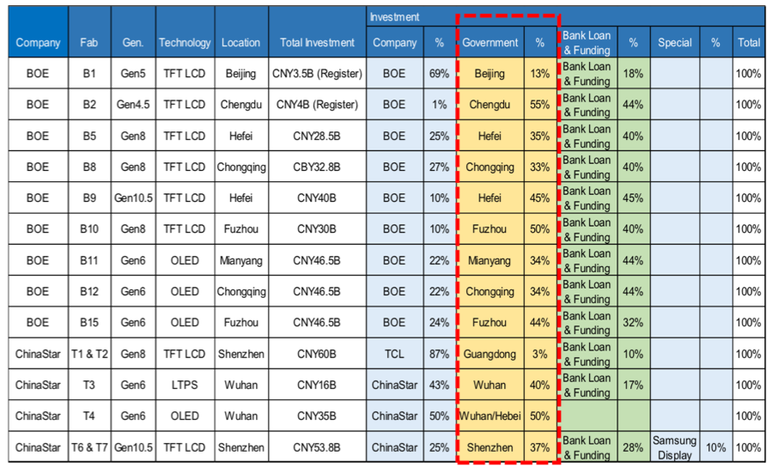