Vertical Divider
Praise for the Potential of MicroLEDs w/o Substance
June 21, 2020

There is a growing chorus by electronic designers that revolutionary products including lifelike displays, extremely thin consumer electronic devices, new lighting in automotive applications, and the presence of light in novel locations are made possible with the introduction of mini and micro LED technology. The fact that OLEDs offer the same or perhaps a better form factor than either mini or micro LEDs and are less expensive seems to have been ignored.

A recent article in Electronic Design magazine claims that through the microscopic size of mini and micro LEDs, the lights can be placed virtually anywhere to fulfill design requirements. In terms of size, mini LEDs and micro LEDs are significantly smaller and thinner than their traditional LED counterparts. Mini LED components are between 50 and 300 μm, while micro LEDs are components smaller than 50 μm. In comparison, the smallest traditional, packaged LED is 650 × 350 μm. With these shrunken, unpackaged versions of the traditional LED, it’s now possible to create considerably thinner, downsized, and arrayed mini LED lighting technology. Any application that uses traditional packaged LEDs can utilize the smaller micro and mini LEDs, and novel applications are made possible due to the smaller components. Because mini and micro LEDs are a fraction of the size of traditional LEDs and involve less material, they’re a fraction of the cost of the larger components and can be utilized in new ways.

Design freedom is incorporated in many aspects of the construction of micro and mini LED applications, including the selection of a preferred substrate. Micro and mini LEDs can be placed on flexible, glass, and rigid circuits among other industry-available substrates.
The following figure illustrates the circuit flexibility for an application using mini LEDs. As a result, they bring flexibility to mechanical design as well as optical designs—LEDs can be placed exactly where intended while minimizing or eliminating light guides and other optics. This allows micro LEDs to be placed in areas where traditional LEDs are problematic. 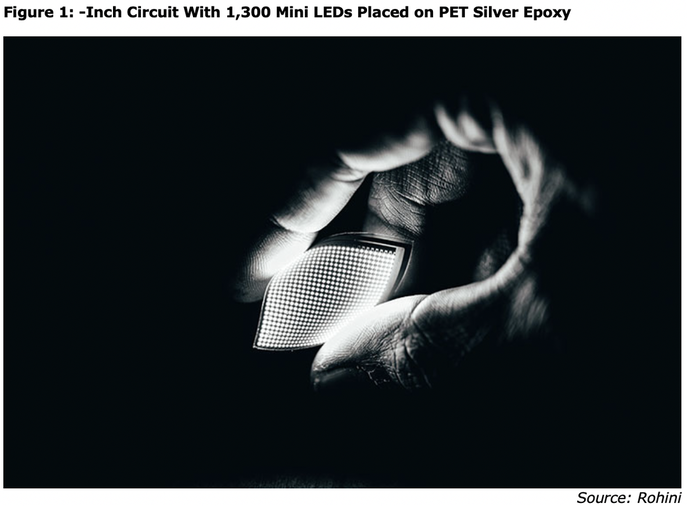 While many companies have created their own product demos using mini LED technology, most products have failed to enter mass production and are far from reaching the average consumer. For engineers to truly achieve design freedom with the new lighting technology, the primary technological roadblock that needs to be addressed is the accurate and fast placement of mini and micro LEDs. The placement solution that meets industry post-process yields and industry-demanded speeds allows for the mass production and broad adoption of micro and mini LED technology. Today, packaged LEDs are placed using standard surface-mount technology (SMT) equipment, which takes much longer than an alternative solution to place mini and micro LEDs. A simpler solution that places mini and micro LEDs faster and accurately would be more cost-efficient due to the less time it takes to place the components. Placement of mini and micro LEDs presents a major advantage for product designers because the components can be put virtually anywhere. In a product application, wherever the light is desired, the microscopic die can be placed and illuminated. For example, in a keyboard backlight, with mini or micro LEDs, a light guide plate is eliminated because the die can be placed directly behind each key.

Thinner products and more uniform light distribution are possible because of minimal diffusion or a light guide stack. Mini and micro LEDs simplify the optical design requirements as the die are placed exactly where the light should go.
Mini and micro LED technology also offers several advantages in the process of manufacturing displays with the ability to place the mini or micro LEDs at the desired pitch, select LED components of the preferred size, and the ability to bin the components at specified wavelengths. Binning the small-scale LEDs at a fixed wavelength leads to optimal product performance in the matter of luminosity, uniformity, and color temperature. A variety of LED die size configurations is a key contributor to achieving the desired product design and performance.

Display Advantages
Display applications of all sizes boast of significant advantages when using micro or mini LED technology. Mini and micro LED backlights have individual die control. Even with the thousands of die in a backlight, each individual die can be controlled, offering greater resolution lighting and brightness control that directly leads to greater screen resolution for product applications. Local dimming is a feature of LED displays that dims the backlight in different regions. Controlling each region individually improves display performance by enhancing the contrast ratio and making dark elements of an image appear darker.  Since mini and micro LED displays have a massive number of smaller-sized components involved in comparison to conventional LED displays, the technology brings a huge advantage to the fields of contrast, brightness, and black levels. Zones of the screen can now appear completely black, or “true black.” Merging mini and micro LED technology with quantum dot abilities will enhance the brightness and color, leading to an overall better picture quality, thus surpassing the standards set by OLED technology.
​
For enhanced image quality, and to completely utilize the full capabilities of high dynamic range (HDR), local dimming is necessary. Televisions will be capable of dimming the mini and micro LEDs behind dark areas of an image to generate a contrast ratio of higher quality between darker and lighter regions of a picture. The advancement of mini and micro LED technology allows for a massive amount of controllable dimming zones; for example, a mini LED television may have a
Micro LEDs enable higher image quality in direct emission displays because of the small components. Each pixel on a direct emission display is constructed of three subpixels—each composed of a red, green, and blue micro LED.
The narrow-pixel-pitch LED direct emission displays offer high luminous efficiency, reliability, brightness, contrast, and an especially fast response time. Coupled with other micro components, micro LED technology opens the door to greater design freedom in display applications. In between each pixel on a direct emission display is a light dome to separate the pixels from bleeding into the adjacent pixel. That dome occupies space that can also be used to place an integrated circuit (IC) or other micro components like sensors. This option enables a simpler design package and a thinner product because components can be distributed to make a thinner stickup.

Soon, consumers will see indoor signage or electronic billboards as one of the first products to adopt the use of sensors coupled with micro LED technology. A sensor can detect when someone is standing near the display and is able to adjust the brightness or image. The overall design freedom enabled by coupling micro components with micro LED technology is creating smarter products, which can save power, create thinner products, and give designers more control.
Not only do display applications benefit from microscopic LEDs, but due to these characteristics, mini and micro LED technology also gives designers and engineers a license to create products as they imagine in other product categories. Other applications for this technology include input devices, computer keyboard backlights, display backlights, and automotive applications. Figure 18 illustrates “LightThread,” a Rohinni design that showcases the microscopic size of the LEDs. LightThread is less than 1 mm wide and can be used in applications ranging from clothing to general lighting. 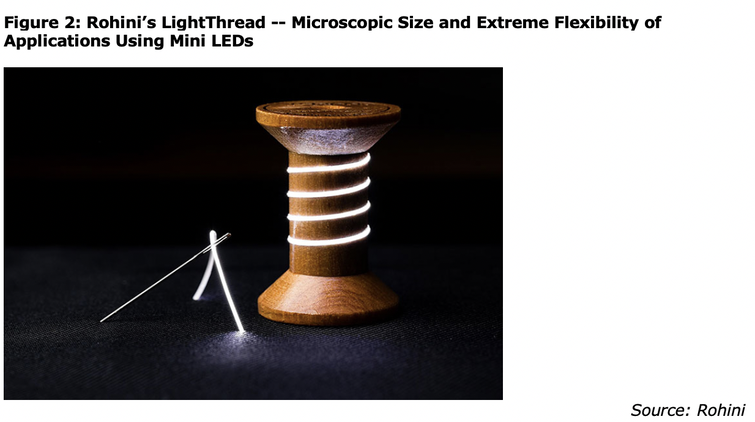 Due to the sheer number of mini or micro LED die in the same area covered by traditional LEDs in an application, power driven to the components is more distributed. And the distributed drive architecture leads to more efficient lights.
Multiple micro or mini LED die in place of a single packaged LED die has better thermal characteristics because the LEDs aren’t being driven as hard. Mini and micro LEDs can be driven at their maximum efficiency curve, instead of their maximum drive capability like traditional LED applications. In addition, the simplified optical stack helps minimize light loss since the light needn’t be redirected or diffused—the light is going where it was intended and takes less power to do so.

Smaller components, lower cost, more efficient lighting, and broader options for the location of mini and micro LEDs bring new possibilities for consumer product applications. Understanding the advantages of mini and micro LED technology is essential for engineers and designers. The small components and their benefits have unlocked the future of displays and light applications of all kinds.

Micro and mini LEDs will roll out as the next generation of lighting technology. Market experts agree that the technology will overtake existing OLED solutions within and outside of the display industry. Microscopic LED components will usher in the development of new lighting applications and significantly improve existing lighting use cases. From: Kylan Alliso, Process Engineer at Rohinni
​