RiTdisplay reported revenues of NT$145 million (US$4.93 million) for July, up 2.28% sequentially and 14.95% Y/Y. But year-to-date revenues totaled NT$854 million, down 16.47% Y/Y. Revenues for third-quarter 2020 are expected to grow by a double-digit rate from NT$437 million last quarter CEO Wang noted the company is currently operating at 80% of its production capacity. It posted net profit of NT$70.25 million in second-quarter 2020 compared to NT$4.52 million a quarter earlier. Second-quarter EPS was NT$1.04, up from NT$0.07 in the previous quarter, according to company data. RiTdisplay dabbled with PlayNitride to produce a microLED for smartwatches as shown below at DisplayWeek. 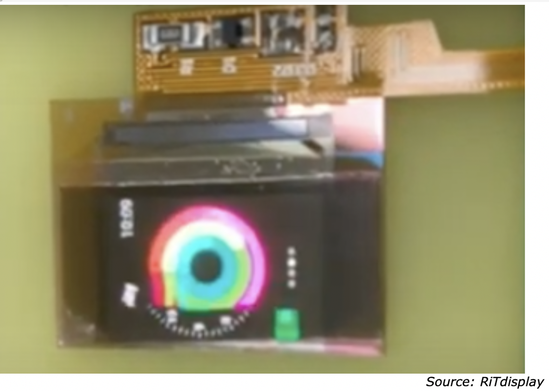 ​Wang seems to be shifting interest to more short term opportunities saying RiTdisplay has taped out commodity mini LED display products and is ready to ship samples to clients for validation, with commercial shipments likely to kick off in 2021. Wang cautioned  that RiTdisplay's mini LED products are not for backlighting applications, and instead the company is directly implanting LED dies on the backplanes to form mini LED display devices. The company will focus on below 6-inch mini LED display products for small- to medium-size applications such as small-size outdoor PID (public information display) devices, such as those on bicycles of bike-sharing services, Wang added.