​As smartphone screens improve in visual quality, including color accuracy, color gamut, and brightness, many of the technical advancements in even the top-tier displays are now imperceptible or unnoticed. Panel vendors and OEMs are constantly trying to come up with new ways, besides “just make it bigger” and form factor, to make the most engaging part of your phone even more attractive. Pixelworks and their Iris visual processor aim to improve the smartphone display experience by integrating unique display features and adaptive elements based on human visual perception.
Pixelworks has mostly been low-profile in the smartphone space, but the company has been working with video and display solutions for about twenty years. They debuted their first partnership with a smartphone maker in 2016 with ASUS on the ZenFone 3 Ultra, integrating an early version of their Iris visual processor. Their most noteworthy smartphone collaborations to date include the Nokia 6.2/7.2, the ASUS ROG Phone, and just recently, the Black Shark 3 and the OPPO Find X2. The latter two phones include the newest fifth generation of Pixelwork’s Iris processor. The Iris 5, along with the company’s software which they coin “Soft Iris”, are responsible for the company’s display-facing features. The Iris chip is a display processor that sits between the device SoC and the display driver IC, connecting to both via the MIPI DSI, supporting dual MIPI. However, for me, this raises immediate concerns for display latency and video hardware acceleration: any bandwidth/stream compression requires additional decoding on the Iris chip so that pixel data can be processed, then it’s re-encoded and sent to the DDIC where it must be decoded again.

Source: Pixelworks Promo
Furthermore, many video apps utilize display acceleration by directly rendering a chroma-subsampled pixel format through MIPI; I imagine that some of the Iris 5’s frame operations may require subsampled display data to be first converted to RGB before processing and decomposition. Brief preliminary findings of ours also hint that some of the Iris 5’s features don’t work with full hardware-accelerated video playback.
Many display “enhancements” that OEMs provide generally involve artificial and arbitrary picture adjustments that may skew the artistic intent of content. One common way that smartphone OEMs help their displays to stand out is by using a very vibrant color profile that expands all the colors on the screen to appear more saturated than originally intended. This is also usually accompanied by a blue-ish white point, which most consumers find more appealing than the standard white point known as D65. Both of these characteristics were originally artifacts of crude color calibration and the lack of color management in past displays, but improvements to both have been poorly received by many; accurate colors have a common perception as being the constraint of display color, while the standard white point appears warmer than what most people had been used to. Smartphone makers have had to continue to artificially oversaturate their screen color and to use a colder white point. This is done by many OEMs even to this day. Samsung had been notorious for shipping all their OLED phones with oversaturated displays, but they stopped this practice with the Galaxy S10 and they now ship them with an accurate color profile in most parts of the world (with exception of their in-store demo units, which understandingly defaults to that vibrant color profile to compare with the others that do, too). It takes more than a “well-calibrated” display for an accurate viewing experience. Lighting conditions in a display’s viewing environment can significantly alter the look of content on the display. For content to look right, it should ideally be viewed in the environment that it was mastered for. And for this reason, color standards that displays conform to also impose a reference viewing environment for which those colors appear accurate. When viewing the display in other environments, the colors on the display may appear incorrect. Thus, a “well-calibrated” display should also be calibrated for its viewing environment.
Smartphones, however, are used in all sorts of viewing environments: outside in the bright sunlight, in bed at night, or perhaps in a venue with multi-colored lights. All these different environments change the perceived look of the content on your smartphone’s screen. Pixelworks focuses on improving display accuracy in these real-world conditions and recreating the artistic intent of the content creator. Instead of frivolous boosts to image contrast/quality/saturation, Pixelwork’s solutions are based on improving content fidelity by adjusting the display and its contents to adapt to ambient conditions. Pixelworks and their Iris 5 chip does the following: First and foremost, Pixelworks tells us that they take responsibility for the full display calibration job of the phones that they work with. They perform individual display calibrations of every unit at the factory, and they claim that their calibration results are within delta E < 1 of their targets. The Iris 5 is also capable of handling the color management for a device, but since Pixelworks works closely with Qualcomm, it is generally left to the Snapdragon and its display processor. 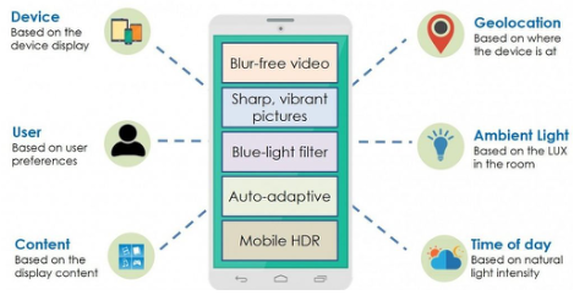