​Pete Lau from OnePlus said the 8 Pro panels had undergone post-production display calibration, which seems like a requirement for using the Iris 5 technology. Apple was the first to calibrate every display coming off the manufacturing line to focus on color accuracy, and adjust the display to the ambient light, which was called True Tone. Pixelworks, CEO Todd DeBonis has monetized the capability with the Pixelworks Iris 5 processor and software believing it is a differentiator. OEMs in the past were choosing not to do that for cost reasons, specifically. Pixelwork’s  process is patented, and calibrates the display across all color gamut’s in a single process without going back to recheck. This process only takes about 26 seconds/phone, a fraction of the time required by other approaches. OnePlus 8 Pro uses a Samsung panel and the Pixelworks Iris 5 chip and software to add color purity, ambient temperature sensing and dynamic refresh at full resolution or variable video frame rates, which according to PixelWorks exceed the performance of Samsung’s D series displays.

Pixelworks has mastered display calibration by working with customers over the last three to four years. Without a properly calibrated phone, the end user experience for super high brightness and wide color gamut OLED displays would be underwhelming.
Pixelworks can calibrate at the display factory level, or at the phone level. OEMs do it at the phone level, which affords significant color accuracy advantages because it compensates for certain characteristics of a phone that can affect color accuracy, such as power supply and thermals. Even with a display calibrated at the fab, the display system is going to have different characteristics that will affect color accuracy, when married to the phone, which is why the same panel can look better on two different phone models that are designed at the same time with similar capabilities and components, with the main difference being the local calibration.
Pixelworks said it’s takes six to eight months of close collaboration with the OEM’s software development team, display system engineers, the display vendor, and in many cases, the AP [application processor] vendor.

The Iris chip is actually a tiny fraction of the display system cost but Pixelworks targeted the price sensitive mid-tier to provide premium features like HDR without having to step up to pricier 700- or 800- tier apps processors. The Iris 3 chip provides an always-on HDR experience, for great color depth and contrast even when viewing SDR content and best-in-class color accuracy. The Pixelworks chip is a small fraction of the AP cost range within each class of display ($10 ) so the overall impact is at least cost neutral or a net cost reduction, when considering display panel or apps processor cost savings.

In the OnePlus 8 Pro or the OPPO Find X2  there are certain core features that run efficiently in software on the apps processor, such as calibration for color accuracy, automatic screen brightness control and tone adaptation to ambient light. The chip has a superset of features including these and more complex functions like motion processing, SDR-to-HDR conversion, sharpness and [video] frame processing, that need to be done in hardware for performance and power efficiency. We have very specialized chips with a lot of custom IP, optimized to be the most power-, performance- and cost-efficient of any implementation. 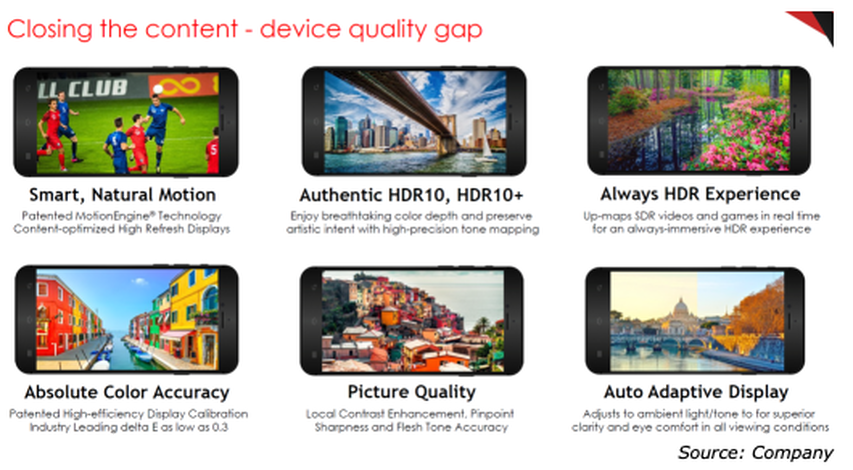 These capabilities are literally unavailable running software on a DSP or a GPU. Since the software features running on Snapdragon also run on the Iris chip, for static apps (web browsing), the system can revert to software features only and save power because they don’t require the kind of processing for video and gaming. The Iris 5 goes to sleep when in static use cases, which is typically two-thirds of usage time, while one-third of the day spent on dynamic apps like watching video or gaming could consume up to 75% of the phone’s battery life, independent of the Iris 5.


When the playing a video or game at 24 or 30 frames a second, the Iris 5 upscale the refresh rate to 60,90 Hz to match the display with lower total system power than running natively at 60 on the apps processor, providing additional enhancements.

For high dynamic range and high contrast, higher frame rate, make the judder and blur so apparent at a brighter, higher dynamic range, it becomes an uncomfortable experience. So, the major studios have basically decided they will not deliver HDR content to the theaters, and very limited [HDR] content will be delivered to the streaming services. Netflix has said everybody has to produce their original content in 4K HDR format, so if any director signs on, they will have to do develop in 4K HDR. For this exact reason, some directors won't work with Netflix. But the art was all about delivering the experience in a theater, which is an SDR 24 frames per second experience. And then [for other screens] they would sort of as an afterthought, create an HDR version but wouldn't make it high frame rate and leave it up to the TV manufacturers and the television’s post processing to fix the artifacts that come from the giant gap between TV display capability and content format. So, two things we're doing: we're bringing world-class expertise to fix the [content quality and hardware performance] gap in mobile phones. And at the same time, we're bringing tools to the content companies to address the issue during content creation. From: PhoneArena
​