Vertical Divider
PC Shipments in 2019 Grow Y/Y After Years of Decline But Are Still in Need of a Makeover
January 27, 2020
​
The growth of the smartphone industry and its current size forced the PC industry to rethink the PC, which is changing from a large and clunky device into something smaller, thinner and lighter, with long battery life. However, with much larger displays and higher performance processors, CPU design and performance needs to be rethought. The resulting changes will make future PCs more power-sensitive than ever before—for example, the dual display and foldable display designs starting to come to market. A key component of supporting these new PC form factors will be to deliver better performance than previous generations without impacting battery life significantly.

The changes are both positive and negative for OLEDs as the only real foldable solution is the OLED but with current software designs and their overwhelming use of white space (even using “dark mode”), the OLED display only increases the power consumption compared to LCDs in addition to their higher cost. So, OLED designers must think creatively to take advantage of this opportunity and we offer an unsolicited suggestion.

Design the backplane using LTPO technology, which obviously will increase the cost of the active matrix, 20 masks vs. 9 masks, but that is only a small percentage of the overall panel cost.  Since, much of the IT use is keyboarding, where the response rate could be tied to the input speed of the user, while still supporting video and games at higher selectable refresh rates. LTPO has worked well for smart watches with always on time, so why not for PCs?

Most desktop and laptop CPUs, have designs that repeat the use of the same core many times over. Many of the same core in a CPU design is fine when there are no power or thermal constraints, but in the world of limited power and limited thermals (passively cooled without a fan), there are issues, which is why the smartphone ecosystem, mostly led by ARM, move towards a big.LITTLE architecture with high-performance cores and low power cores. The PC ecosystem is beginning to adopt this approach to CPU design, but the earliest big.LITTLE implementations, the lower power cores have significantly lower performance than the higher power cores—mostly to save on die space and power consumption. However, this limitation results in a pretty significant performance delta between the high-performance cores and the lower power efficiency cores. Although ARM tried to bridge that gap throughout the last few years, its latest efficiency core design is a couple of years old and isn’t updated as frequently on an annual cadence as its high-performance cores. Probably because ARM is trying to catch up with Apple and Intel on absolute performance and that is best done with the bigger high-performance core designs. Intel, on the other hand, has been the leader in high-performance core design and is working to lower the power envelopes of its CPU designs without compromising too much on performance.

Figure 1: A Block Diagram of the Intel Tremont Core Design 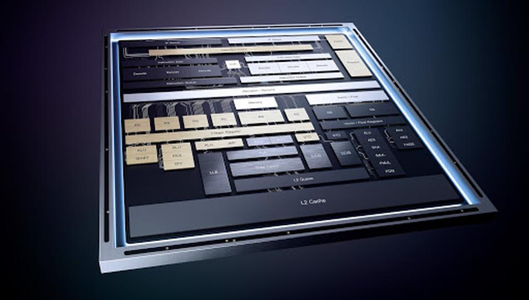 Source: INTEL
Intel’s Lakefield processor blends Tremont architecture to build a processor balanced for power and performance without making compromises to performance. Microsoft’s upcoming new Surface Neo dual-screen mobile device will feature Intel’s Lakefield processor, inside thanks to its blending of CPU architectures optimized for mobility. This new mobility form factor with maximum performance is possible in part thanks to the new Tremont CPU architecture. As shown below, the PC industry in 2019 has shown some moderate growth after years of Y/Y declines. Close to two-thirds of all shipments were contributed by the top three vendors including Lenovo, HP and Dell.
Despite supply chain issues, vendors remain bullish, especially in commercial. Intel's continued efforts to improve supply will help maintain volume in 2020, but constraints are unlikely to ease quickly. The upshot, however, is the upgrade opportunities OEMs have with SMBs who have delayed refreshes in anticipation of new chipsets.", according to Canalys. 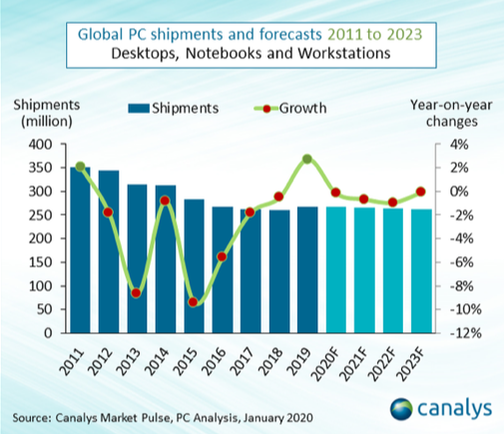 Q419 contributed to the annual growth by being up 2.3% Y/Y with Lenovo, HP and Dell experiencing market share and volume growth, while most of the other top suppliers declines.
​
Table 1: Q419 PC Shipments, Share, Growth