Vertical Divider
OTI Takes The Risk Out Of Under Display Cameras

OTI Lumionics is a start-up in Canada that produces transparent electrodes using a technology they call the ConducTorr™ Electrode. They tried to convince OLED small/medium panel makers to use electrodes for notebook size displays to reduce degradation of the signal carried by the electrode, because the signal on the far edge was not uniform with the rest of the display.  Samsung, which makes most of the OLED panels for notebooks apparently found another solution leaving OTI with a big hole in their business plan.

However, fortune shined on OTI, when Apple introduced displays with notches that were subsequently adopted by most of the smartphone industry. The notch became a symbol of suboptimization as it reduced the percentage of screen available for an image just when streaming became popular and the market wanted bigger and higher density displays. Display engineers were challenged and a series of compromises, like smaller notches and pop-up cameras were tried. These solutions introduced other tradeoffs and attention began to focus on under display cameras. In order to have an under-display-camera, the camera had be positioned to create a light path to enable high quality images as photography became a major emphasis in smartphones. OLED smartphones are top emission devices such that the TFTs, are below the OLED and block light reducing the aperture ratio. But the transparency for even the best OLEDs are <40%, which doesn’t allow enough light into the camera. The preferred solution was to change the pixel density under the camera to allow sufficient light in.  This process works and has been used by ZTE and Xiaomi, but it comes with a number of defects that reduce either display or camera performance

PTI’s ConducTorr™ CPM solution avoids reducing the pixel density under the camera by patterning holes in between the OLED pixels for increased light transmission, so it is a natural solution for under-display cameras. The technology produced a strategic investment from LG Ventures (the investment arm of LG Group) to help accelerate the commercial adoption of its materials and to scale up operations. LG interest goes well beyond under display cameras. LG is the leader in transparent OLEDs for public displays, TVs and soon monitors. It is possible that OTI’s technology could increase the transparency of LG’s large area products from ~40% to >70%.

In order for the under-display camera to work, the portion of the display above the camera sensor must be relatively transparent and allow light and other signals (e.g., for 3D face recognition) to pass through. OLED panels. 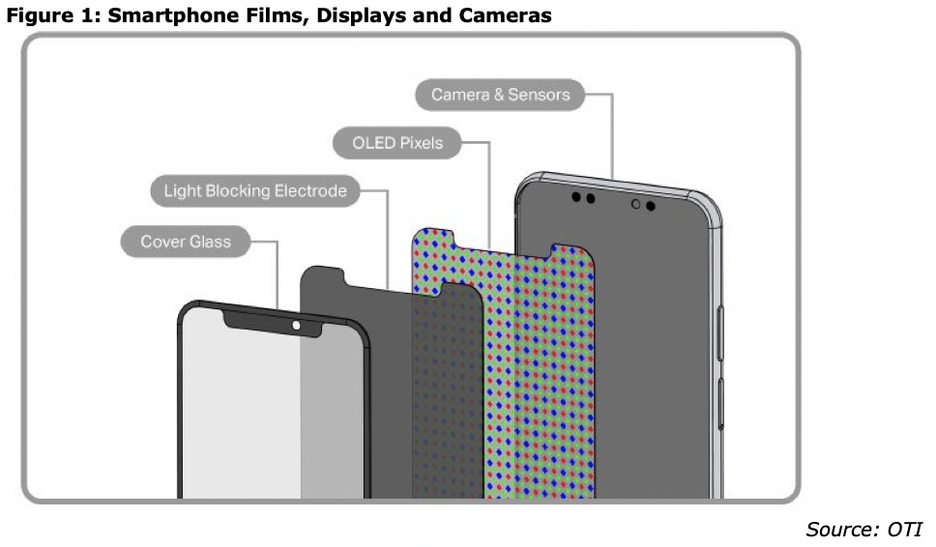 ​Michael Helander, CEO and Founder of OTI said, “On top of the many layers that make up an OLED display is a thin electrode that supplies electricity, which is converted into light by the OLED material. But because it’s metal, it blocks some of the light, which lowers the luminance. The electrode also reduces the native transparency of the OLED material. The challenge is to manufacture in a large scale wafer, since effectively patterning of the metal layer to create holes is not possible with today’s equipment. Nor is it possible to change the width of the electrode, where the camera is located.” The manufacturing process developed by OTI would patterns holes between the pixel electrode without effecting the electron flow.” He father explains, “ConducTorr cathode patterning materials  (CPM) are like an anti-stick coating for metal giving OLED manufacturers the ability to deposit CPM material during the VTE process in areas without metal and then finish the normal manufacturing process, producing holes in the  metal layer. In addition, some lengths of the electrode  can be made thicker [or] thinner. It allows a high degree of optimization that otherwise is impossible with the existing manufacturing process.”  CPM patterns holes in the space between the pixels, which increases the transparency of the device. A similar explanation given by Xiaomi  (and used by ZTE) explained how its own under-display camera was developed (but without the holes). However, the quality and durability of OLED panels are deteriorated by the Xiaomi’s method. ZTE, Xiaomi, and OTI Lumionics rely on using the space between the pixels to increase light transmission, but the approach should not reduce the overall quality of the OLED display panel. Helander claims OTI’s ConducTorr™ CPM technology would enable better and more efficient under-display cameras than the current process used by ZTE or Xiaomi.

The following figure distinguish between CPM and the traditional method of increasing the light flowing through the display. In the standard approach, the shadow mask must include at least two different patterns. Using CPM, the patterns is maintained across the entire display, but the electrode is produce with material that can be patterned with holes between the pixels to allow additional light flow without impacting the electrons.

​The CPM deposition is part of the standard VTE process, so it requires only 1 additional chamber. OTI uses the same evaporation process used to make the red green blue (RGB) pixels, but it’s all low temperature. The low deposition temperature of the electrode minimizes damage allowing virtually any pixel density equivalent to thousands of pixels per inch, which is about double the resolution of a normal smartphone display, with no degradation of display quality and lifetime.  Of course, the limits of the FMM still apply. The result is a pattern with holes that the light flows through without any impediments to block it. 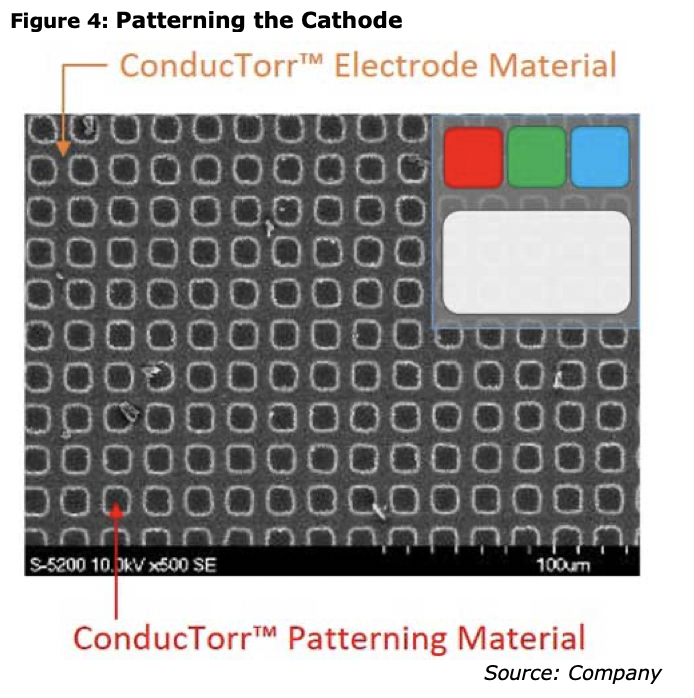 ​OTI has yet to produce a commercial ConducTorr™ CPM solution but  Helander quality. The early products provide insight in how the consumer reacts to the tradeoffs or if they even notice. The first few generations will use trial and error until manufacturers gather enough consumer feedback to prioritize what’s more important – camera quality or display quality.

​The process used in the ZTE Axon 20 5G’s has a lower pixel density, but to ensure that the top portion with lower resolution doesn’t stand out significantly, ZTE has to drive the pixels in that area higher than the rest of the display causing the display area over the camera to have lower lifetime. ZTE’s solution also results in some non-uniformity, because the area over the camera has thinner, and more transparent material than the rest of the display, causing a slight color shift. 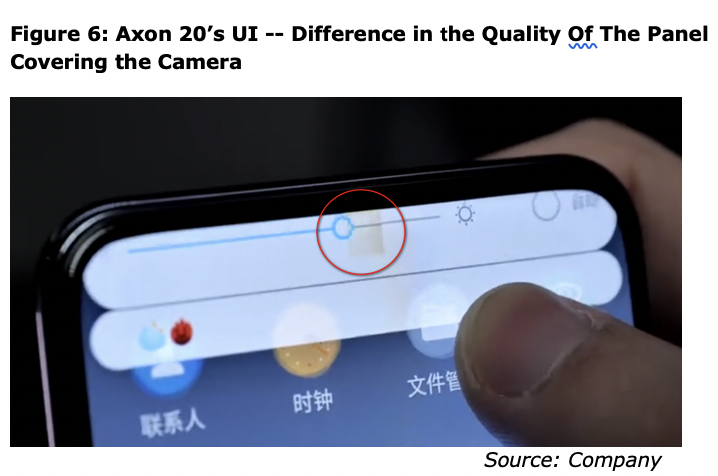 ​ZTE had to limit the UI to show notifications and non-important content in the area where the camera lies so that it’s less noticeable to the user. But for different user interfaces and operating systems, this software solution must be customized for each display design. 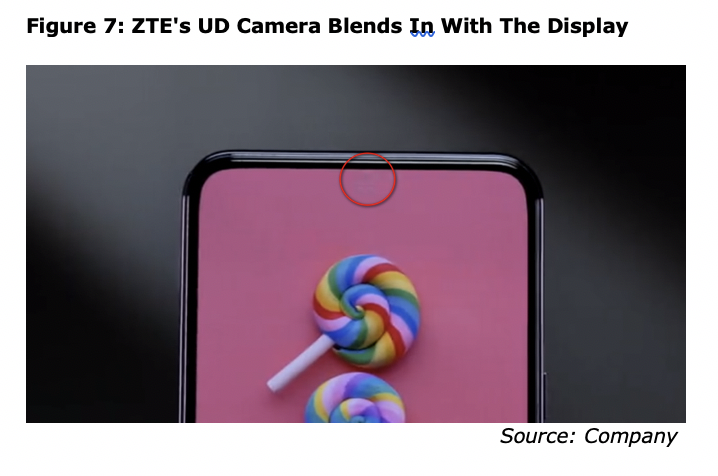 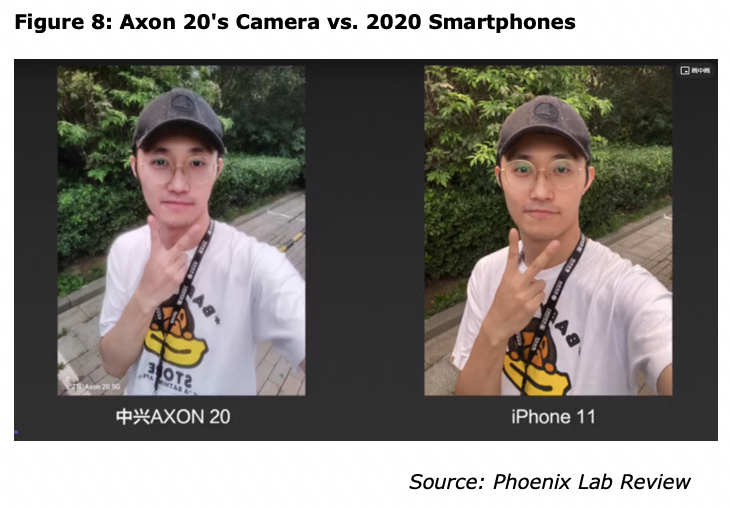 Xiaomi  approach is slightly different. They  reduce pixels size above the camera smaller (instead of reducing the resolution) creating a larger aperture ratio, which increases light to passing through the display to the camera lens. It is better than the ZTE solution but still has similar drawbacks as shown in the next figures. 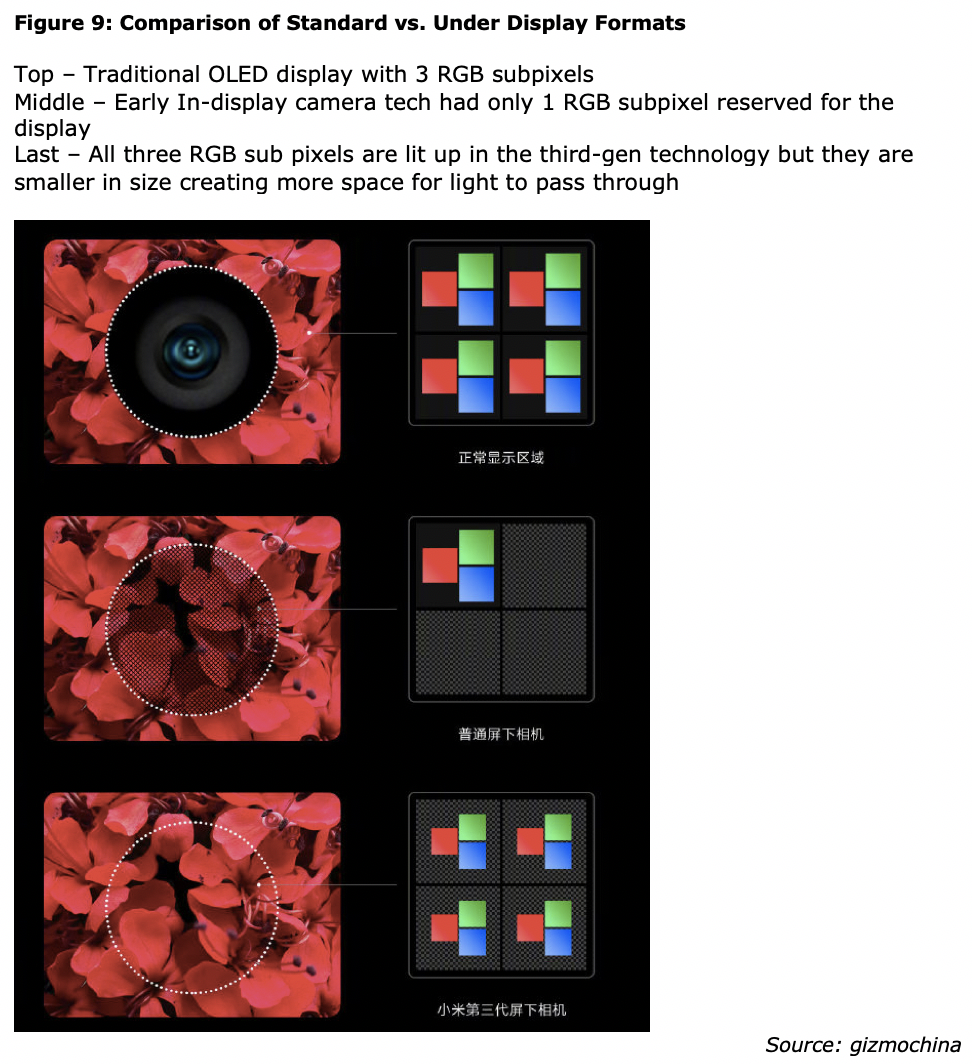 ​OTI commented that reducing pixel size creates more space between the pixels for light to go through but Xiaomi didn’t actually cut holes. Therefore, the pixels under the camera must still be driven harder and the possibility of a visible color shift. 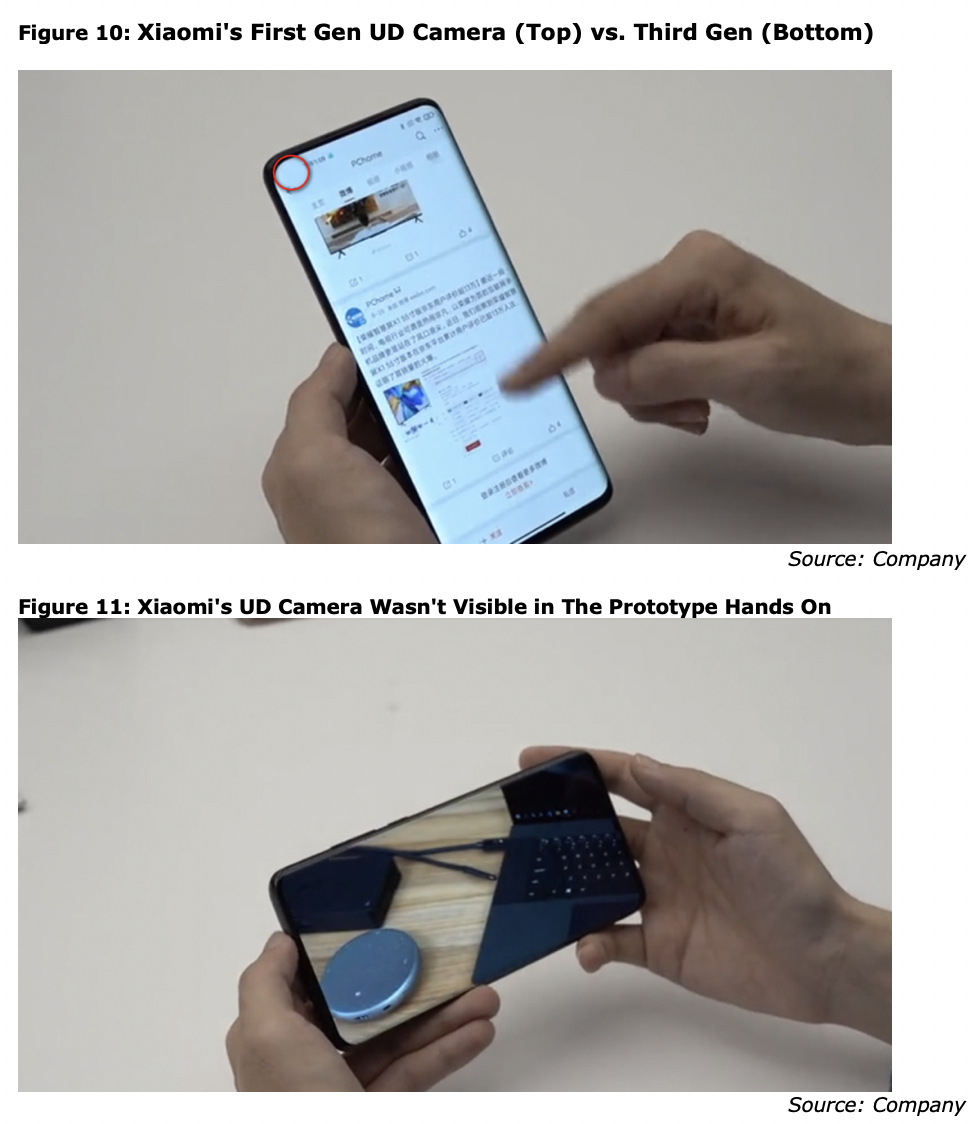 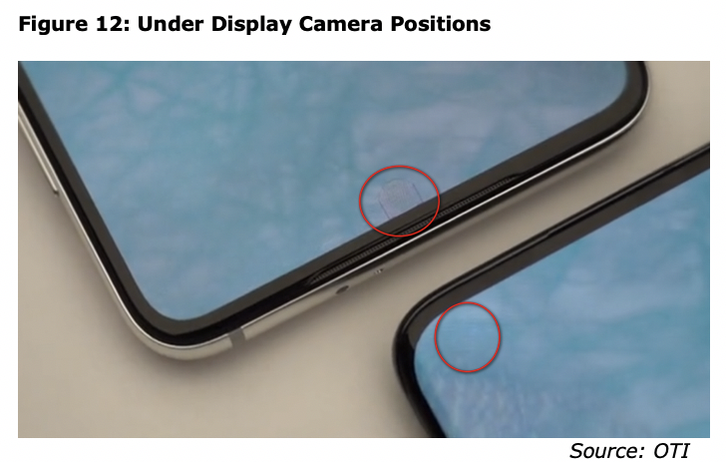 ​A video of the Xiaomi prototype (via PCHome), didn’t show any visible difference between the quality of the display above the camera (top left) and the rest of the panel. The conclusion is Xiaomi’s solution is better than ZTE’s solution. However, the phone was a prototype model and the hands-on video didn’t really focus on the UI elements on top of the camera or its selfie quality. Both the Xiaomi and ZTE will probably have to rely heavily on post-processing to make the selfies look better. Xiaomi could also be leveraging its technology acquisition from Meitu in 2018. 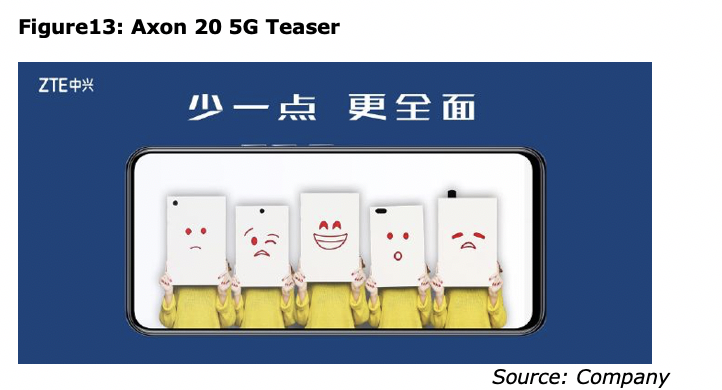 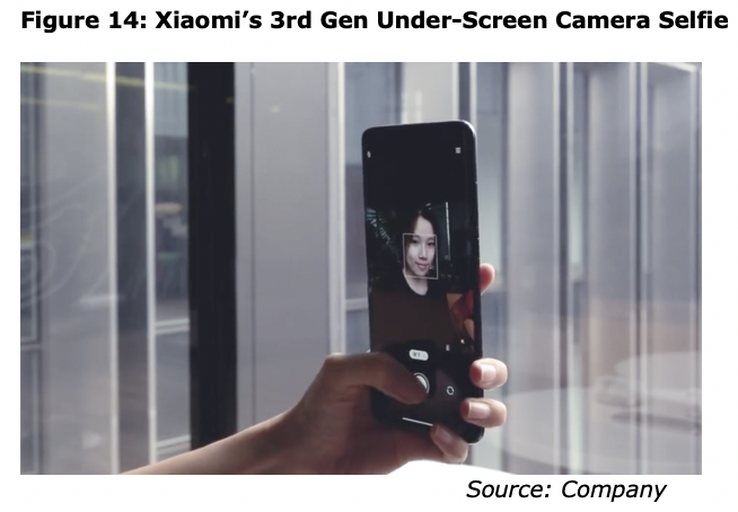 ​Current designs are limited to one or two cameras at the top bezel. But perhaps, in terms of the internal design of the phone, that’s actually not the best place. Another location might free up more space for the battery, or make the phone thinner. The advantage of flexible camera placement on the front is the angle of view. Under-display cameras, camera placement is no longer limited on the top bezel, whether it’s on a phone tablet or laptop, providing design freedom to place camera anywhere under the display. In order to offer a near bezel-less screen experience on the Matebook X Pro, Huawei added a pop-up camera in its keyboard. If the camera could be located at the center of their screens — zoom calls would be more realistic as the person on the other end would be looking straight at the other people on the call.  Microsoft is considering the potential of under-screen cameras inside large TVs that are part of a video conferencing system. 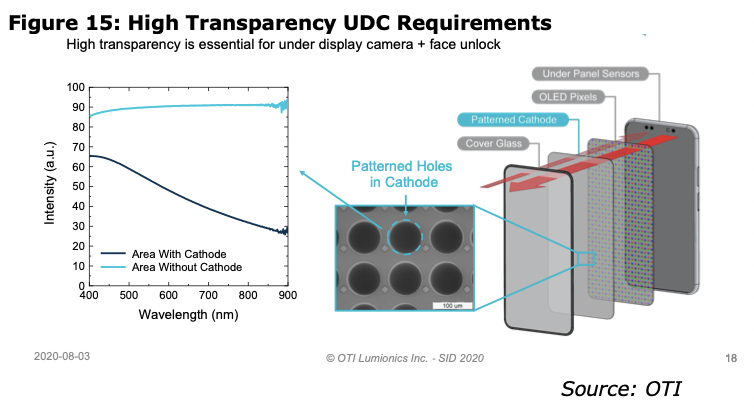