OPPO is showing off a prototype phone with a rollable screen. And while the OPPO X 2021 is impressing those who've got to handle the new device, don't expect this rollable phone to shake up the race to build the best foldable phones any time soon.
OPPO would be the first to admit the X 2021 isn't ready for prime time. Instead, the Chinese phone maker seems to be building up buzz for its rollable phone and to show how much farther along its rollable concept is when compared to similar devices from other phone makers. LG's CES keynote was highlighted by an on-stage demo of its rollable phone. LG promised the device would ship this year, but that was before the company giant decided to shut down its phone business, the LG Rollable included. LG employees in South Korea are taking advantage of the company's fire sale prices. OPPO is determined that its rollable phone won't suffer the same fate, and a hands-on by Jon Porter of The Verge sounds a largely positive tone about the phone's prospects. But Porter begins his hands-on by noting the OPPO X 2021 is far short of the company's own goals for the number of times you can extend and retract the rollable display. Even more significantly, Porter writes, "it’s clear that hitting this arbitrary number is far from the only challenge OPPO is facing in bringing this device to market."

Like the LG Rollable, the OPPO X 2021 enlarges its screen real estate by rolling out more display by pressing a button on the phone and the right side of the device starts extending outward. The extension takes the OPPO X 2021 from a 6.7-inch phone to a 7.4-inch tablet that's more ideal for viewing photos and video. From the hands-on demos, OPPO's rollable approach brings three advantages over foldables.

The positives may not outweigh the challenges, which include the rolling mechanism, which will add cost and will likely need perfecting and durability.  In addition,

OPPO will have to make the case for a rollable phone and why it's a better choice than one with a conventional design — especially with the rollable phone likely to cost a premium. Xiaomi and TCL are working on next-generation flagship smartphone, which are expected to go official in the third quarter of this year. The upcoming phone of the MIX series, Mi MIX 4, launching after three years, is said to offer an ultimate full-screen experience to the users. The Xiaomi Mi MIX 4 will be made available in only one version that will have an under-display camera sensor.
​
Concept Render of the Xiaomi Mi MIX 4 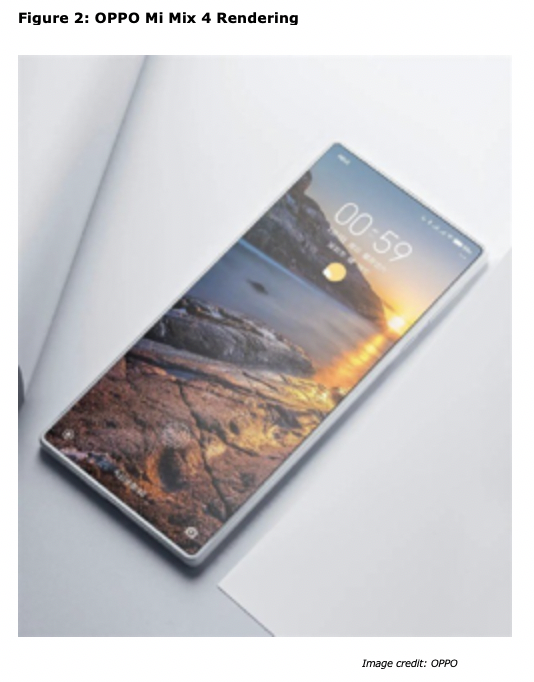 ​The price of the Mi MIX 4 will be higher than the Mi 11 Ultra flagship smartphone from Xiaomi, which is touted as the “Light of Android” because of its top-of-the-line specifications. The Xiaomi Mi MIX 4 could possibly miss 2K screen resolution support but may come with a specially customized high-screen resolution which will offer better display results compared to Full-HD+ screen resolution. The device is also expected to adopt a four-frame fully equal-width design as it aims to offer a true full-screen design with an under-display camera sensor.  The handset is expected to come powered by the Qualcomm Snapdragon 888 chipset and will come packed with a 4,500mAh battery that will support 120W wired fast charging — the highest-rated fast charging technology so far.