The OnePlus 8T Concept is a similar phone to the OnePlus 8T that was released a couple months ago, but it’s got a unique rear design that changes color alongside a motion-tracking radar module. According to OnePlus, this color-changing effect is achieved with a film that contains metal oxide that sits underneath the phone’s glass back and changes color as different voltages are applied to it. At its most basic, it could change color to show off the phone’s notifications, like an incoming phone call, much like the notification light that it has included on its phones in the past. But where things get really interesting is when it gets paired with the concept phone’s rear-mounted radar module.

Figure 1: OnePlus Design on The Rear of The Phone Can Change Color 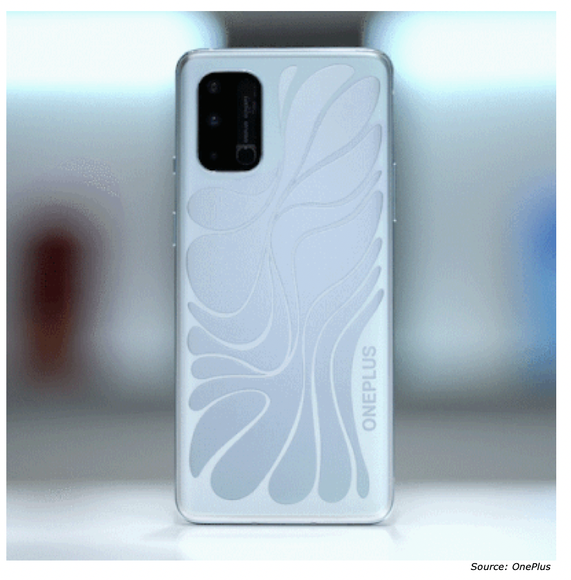 This module, which is built into the camera bump on the back of the phone, uses millimeter wave radar to bounce electromagnetic waves off its surroundings and lets the phone “perceive, image, locate, and track objects.” Although OnePlus says this mmWave technology is “borrowed from 5G,” it adds that the radar module is separate from any mmWave communication module in the phone. Functionally, it sounds similar to the Pixel 4’s radar-enabled Motion Sense technology, which when swiped above the phone to skip music tracks or silence alarms. It could also detect user’s presence to show the time and any notifications. The functionality was interesting, but Google hasn’t included it in subsequent phones. This concept phone can also use this motion tracker to do simple things like answering a phone call with a gesture or offer more advanced functionality like sensing a user’s breathing. Its back could change color to indicate an incoming call, and then accept or reject it with a gesture, without having to touch the phone itself. Or the radar could sense breathing, and then change its back’s color in time with it, “effectively making the phone a biofeedback device,” OnePlus says.

It’s an ambitious collection of features, but there’s no guarantee we’ll ever see them come to a consumer device. After all, a little under a year ago OnePlus was showing off the OnePlus Concept One, an interesting device which used electrochromic glass to make its rear cameras disappear (and which also acted as a pretty neat little ND filter). However, the technology is yet to make an appearance in any of the company’s flagship phones.
​
As with the Concept One before it, OnePlus says it has no plans to commercially sell the OnePlus 8T Concept, so it’s best thought of as a small showcase of what the company is working on. But with any luck, the technology could yet come to one of its real smartphones one day.