OnePlus has officially announced the devices, putting an end to all speculation. Coming in with the latest Qualcomm Snapdragon 865 SoC, 5G across the board, high-refresh-rate displays support, OnePlus’ first-ever fast wireless charging solution, and new colors and finishes, the OnePlus 8 and the OnePlus 8 Pro have a lot to offer. The OnePlus 8 and 8 Pro are very similar in design except for the inclusion of a few new sensors on the rear of the 8 Pro. If you’re familiar with last year’s OnePlus 7 and OnePlus 7T series, however, there are a couple of important design changes. 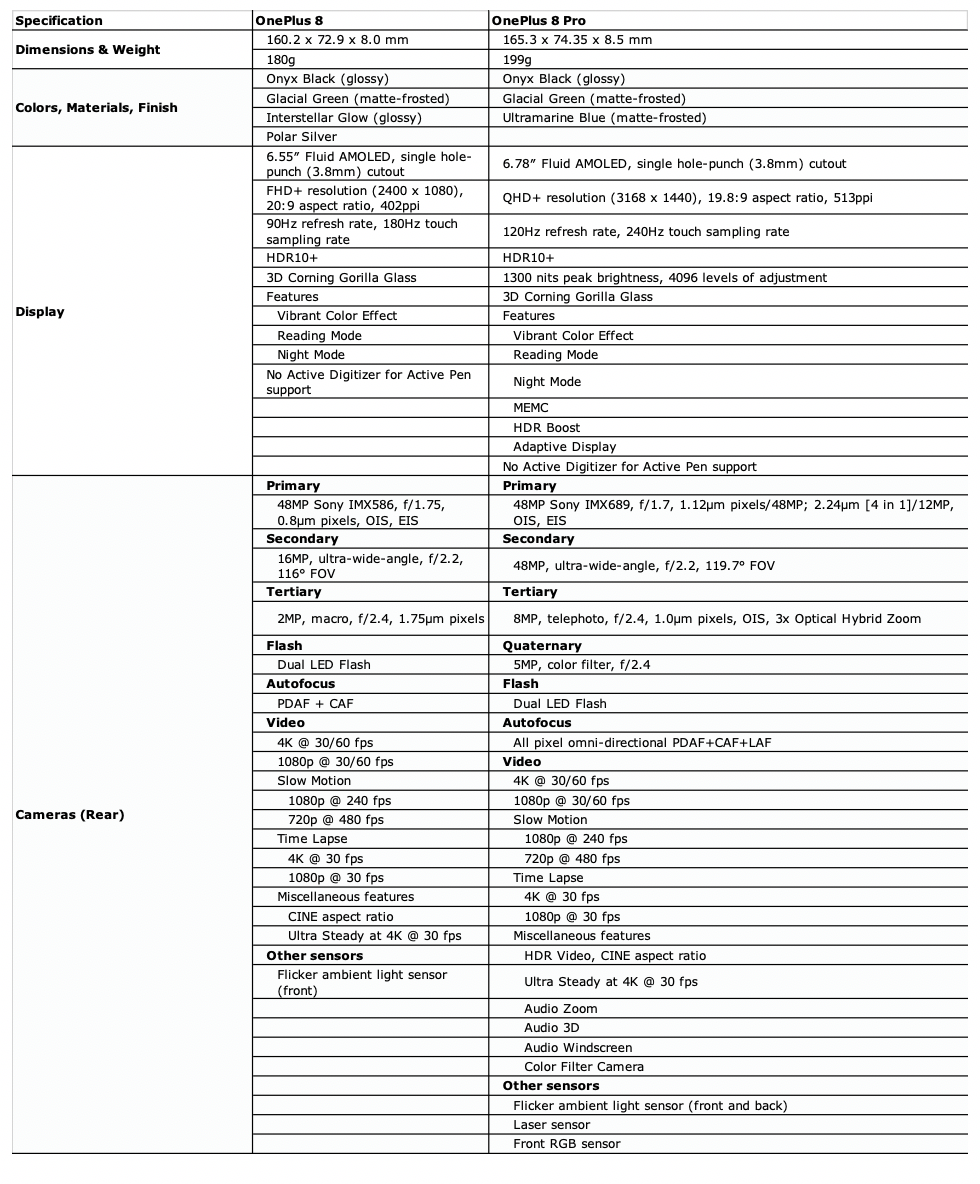 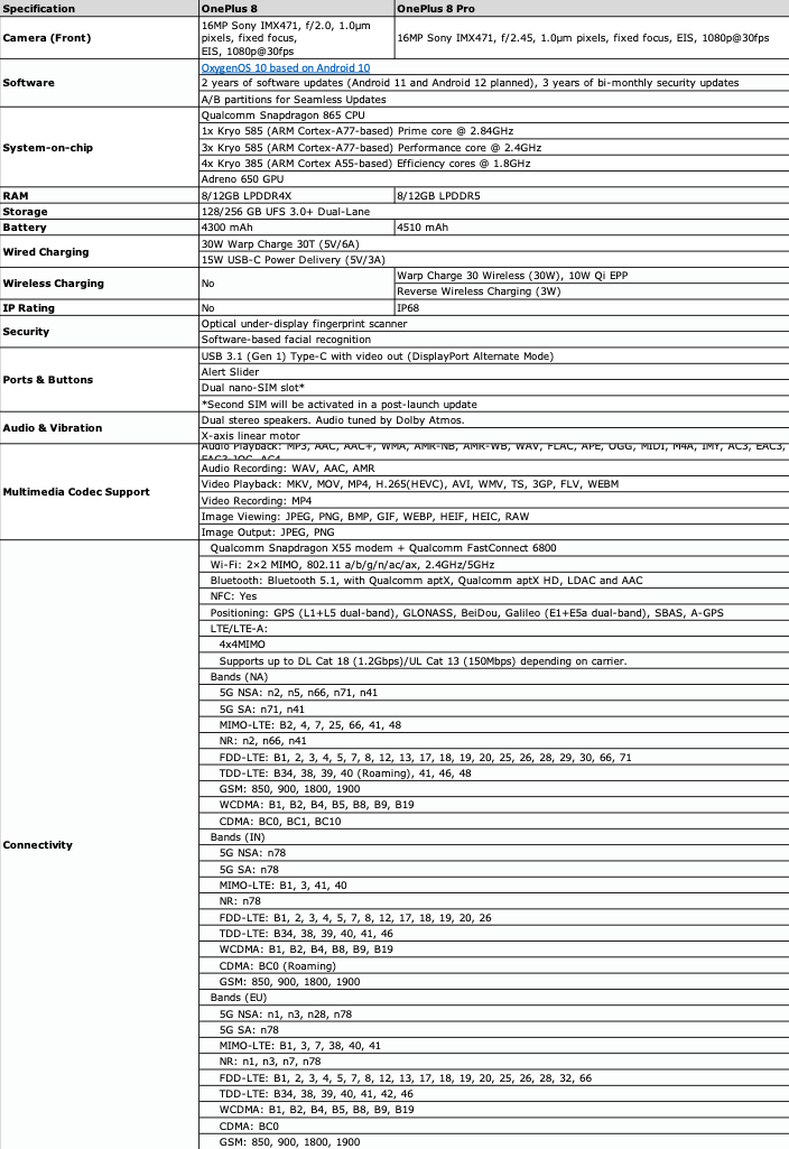 While the OnePlus 8 and OnePlus 8 Pro share the aforementioned display features, the OnePlus 8 Pro also has a couple of additional display features from Pixelworks:
The new OnePlus 8 series smartphones will pack the best mobile processor from Qualcomm, the Snapdragon 865. The Qualcomm Snapdragon 865 has a tri-cluster CPU core configuration with 1x Kryo 585 (ARM Cortex-A77-based) “Prime” core operating at a maximum frequency of 2.84GHz, 3x Kryo 585 (ARM Cortex A77-based) “Performance” cores operating at maximum frequencies of 2.4GHz, and 4x Kryo 385 (ARM Cortex-A55-based) “Efficiency” cores operating at a maximum frequency of 1.8GHz. Qualcomm says the Snapdragon 865 offers 25% faster CPU performance over the Snapdragon 855, which was found in the previous-generation OnePlus 7 series. The GPU in the OnePlus 8 series is the new Adreno 650 which offers 20% faster graphics rendering and 35% greater power efficiency than the Adreno 640 GPU of the OnePlus 7 series. Overall, the OnePlus 8 series should offer stellar real-world, gaming, and theoretical (benchmarking) performance.
OnePlus is also offering 8GB or 12GB of LPDDR5 RAM on the OnePlus 8 Pro, though the OnePlus 8 comes with either 8GB or 12GB of LPDDR4X RAM. Both devices feature 128GB or 256GB of Dual-Lane UFS 3.0+ storage, however. The touch sampling rate on the OnePlus 8 and 8 Pro are 180Hz and 240Hz respectively. Both phones have OnePlus’ RAM Boost feature that is designed to speed up launches of your most used applications.


The camera is one of the main areas of improvement in the new OnePlus phones. With the gradual price creep over the years, OnePlus has now firmly stepped into the premium flagship category, so the two phones absolutely need to pack a punch here. At least on paper, there is some weight behind this.
We will start talking about the cameras with the front camera, which is nearly the same on both phones. Since there is no pop-up or notch cutout this year, the front camera sits in a hole-punch cutout on the top-left corner of the display. The sensor is the 16MP Sony IMX471 for both devices, the same as the one on the OnePlus 7 and 7T series. The lens is either an f/2.0 or f/2.45 aperture lens, 1.0µm pixel size, fixed focus, and EIS support for stabilization. You can record from the front camera at 1080p@30fps. The rear camera setup on the phones is very different.
OnePlus 8 The OnePlus 8 has a triple rear camera setup. The primary sensor is the 48MP Sony IMX586 with an f/1.75 aperture lens and 0.8µm pixels pre-binning. There is an OIS module as well as support for EIS on board, so your low-light and handheld shots will be steady. The second camera is a 16MP ultra-wide-angle sensor, with a 116° Field of View and an f/2.2 aperture lens. The ultra-wide camera also supports Nightscape, so you can take low-light landscapes too. The third camera is the dedicated 2MP macro camera, with an f/2.4 aperture and 1.75µm pixels. There is a Dual LED flash onboard, as well as PDAF and CAF support for quick auto-focusing. The OnePlus 8 (and the 8 Pro) also feature “Smart Pet Detection” that increases the shutter speed—great for tracking and focusing on these fast-moving subjects for perfect pet pictures. For video, it records at up to 4K@60fps, with slow-motion supporting up to 720p@480fps or 1080p@240fps. It also video records at 4K@30fps through the wide-angle sensor with Ultra Steady mode.

Video recording features include 4K@60fps and slow-motion up to 720p@480fps or 1080p@240fps. Video recording at 4K@30fps is available through the wide-angle sensor with the Ultra Steady mode. There’s also 3D audio and Audio Zoom support, thanks to the inclusion of a third microphone hole. You can also shoot HDR videos, which OnePlus is calling “single frame 3-HDR,” which can be useful when filming scenes with high contrast lighting.

Like the OnePlus 7T series, the OnePlus 8 series supports fast wired charging using OnePlus’ Warp Charge 30T technology. Charging peaks at 30W (5V/6A) using OnePlus’ proprietary Warp Charge cable and Warp Charge 30T charging adapter. OnePlus’ fast wired charging solutions migrate the power management and heat dispersion systems to the power adapter, allowing for the phone to be charged quickly but without a lot of heat being generated near the battery. This comes at the cost of the power adapter having to be quite large and necessitating the use of a first-party cable and adapter, though. Fortunately, the OnePlus 8 and 8 Pro support 15W USB-PD charging as well. The OnePlus 8 Pro is the first smartphone from OnePlus to feature wireless charging. OnePlus previously stated they waited to implement wireless charging until it was fast enough for their liking, and apparently, that meant they wanted wireless charging that is comparable to their fastest wired charging solution. The new Warp Charge 30 Wireless charging technology supports a peak output of 30W, comparable to the peak 30W output of Warp Charge 30T. Normally, inductive charging generates far more heat than wired charging, so it’s generally not as efficient. However, OnePlus says their solution has a charge efficiency of 97% thanks to two things: The inclusion of a fan in the wireless charger and the inclusion of “isolated charge pumps” in the phone to modulate the voltage and current.

The OnePlus 8 has a 4300mAh battery while the OnePlus 8 Pro has a 4510mAh battery. That’s an increase over the OnePlus 7 and 7T series, but it’s necessary to cope with 5G connectivity (on both models) and a 120Hz refresh rate display (on the 8 Pro).

The entire OnePlus 8 series is 5G-ready. With the exception of the Verizon OnePlus 8 model, you won’t need to buy a special 5G version of either phone to connect to the 5G networks of most carriers. That’s because both devices feature Qualcomm’s Snapdragon X55 multimode 2G/3G/4G/5G modem. 5G band support differs by region, though, so be sure to check the specification table above to see if the device will support your network’s growing 5G network. In general, the OnePlus 8 and 8 Pro should be able to connect to the sub-6GHz (low and mid-band) 5G networks of most carriers, but only the Verizon OnePlus 8 will support connecting to the carrier’s mmWave “Ultra-Wideband” network. The Indian models support 5G on band n78 even though India does not have a 5G network, but this is explained by the fact that there was no way for OnePlus to avoid 5G support since the Snapdragon 865 can only be paired with the Snapdragon X55 modem.
Also featured in both devices is Qualcomm’s FastConnect 6800 mobile connectivity subsystem. This enables Wi-Fi 6 (802.11ax) support as well as Bluetooth 5.1. You’ll need to have a Wi-Fi 6 router to take advantage of the faster speeds. As for Bluetooth 5.1, there aren’t that many notable improvements. The OnePlus 8 and 8 Pro support Qualcomm’s aptX and aptX HD, Sony’s LDAC, and AAC codecs for high-quality Bluetooth audio. Lastly, both devices support dual-frequency GNSS for improved location accuracy, and they should also support India’s NavIC system.


Table 3: Prices Of Each Variant Of The OnePlus 8 And OnePlus 8 Pro. 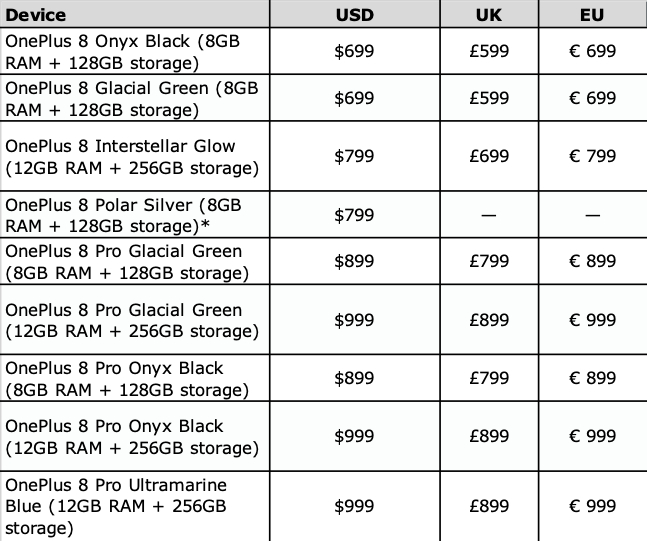 Source: xda developers
​
​A few odds and ends that don’t fit in other sections, include:
Features specific to the T-Mobile and Verizon carrier models: