Vertical Divider
Omdia and DSCC Forecast Double Digit CAGR for Foldables thru 2025
May 10, 2020

​Omdia reports the demand for OLED foldable display panels is expected to surge to 3.9 million this year, over a fivefold increase from 700,000 in 2019. Shipments are then expected to rise quickly over the next five years to 60m in 2025. In 2019, shipments were limited due to the extremely high pricing and low reliability of models, from Samsung, Royole and Huawei. DSCC was more optimistic in their forecast for foldable smartphones at 66m in 2025. Plus, DSCC expects an additional 10m foldable units for laptops and tablets by 2025. 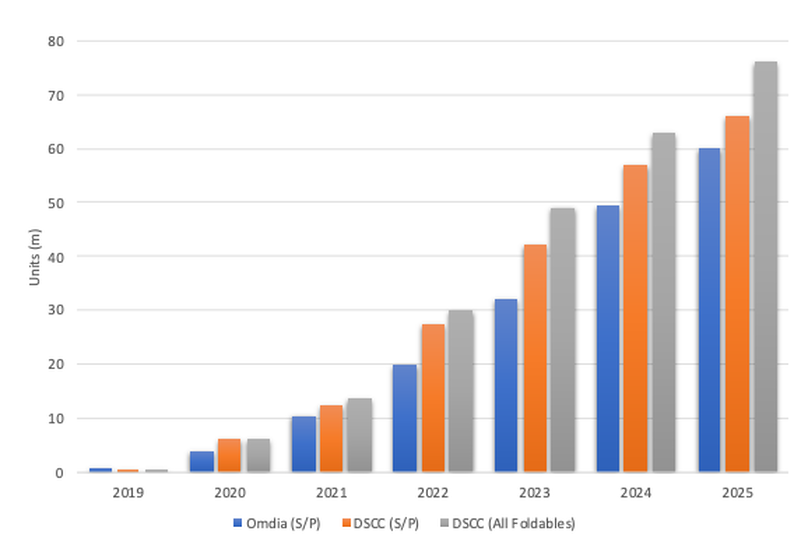 Source: Omdia, DSCC and OLED-A
​Foldable displays are currently difficult to mass produce with high reliability and low cost due to their extreme mechanical and optical properties. Omdia claims smartphone makers are using foldable displays with lower resolutions than they employ in their flagship models, which enables manufacturing at a lower cost and with better yields than high-resolution display panels.  "The foldable display market could grow much more rapidly if the reliability of foldable cover lenses, touch sensors and polarizer films is improved. To enhance foldable display durability, panel suppliers need to adopt innovations including ultrathin glass covers (UTG), touch sensor on thin-film-encapsulation (TSP on TFE) and color filter on thin-film-encapsulation (CF on TFE)."


Samsung will unveil its third foldable phone along with the next Galaxy Note, confirming that the device to be the Galaxy Fold 2. Confirmation comes as phone sales drop 38% in February compared to 2019, and a big recession looming. The Galaxy Fold 2 is likely to work with the original mold, pinching, bending, and refining on the go. Adopting the Fold design that places the largest folding screen inside a device that opens like a book, and the smallest, most robust screen in the outer "cover", a way that protects the inside screen from damage. additional. Some of the early Galaxy Fold 2 rumors suggested that the phone could take a new shape with a larger screen on the outside, however most rumors point to the Fold 2 being more like the first Fold, with specs. and cosmetic features that align with the Galaxy S20.
The Galaxy Fold 2 is expected to have a stylus and the S Pen would make the Fold a lot more like a tablet and multitasking tool, and help set Samsung's foldable phone apart from the rest. The Fold's original plastic screen was too soft and infamously prone to damage to maintain the pressure of a nail, much less a pencil. But with enough structural support and a UTG, cover lens which was first used with the Z Flip, a stylus is possible. The Galaxy Fold 2, following in the footsteps of the original with two screens: one on the outside to initiate short tasks, such as initiating a phone call or answering a quick text message, and the larger screen on the inside does all The heavy lifting of watching videos, multitasking, and longer email composition. The largest screen is said to follow the Galaxy S20 with a 120Hz screen refresh rate, while the smallest screen will fill in the default 60Hz screen. The faster refresh rate makes scrolling, browsing, and some games run extremely smooth, but it can also drain battery life at a faster rate. The Fold 2's 120Hz display setting is likely to be an option, with the default 60Hz typical rate, as on S20 phones. that cover display will measure 6.23 inches from corner to corner; the one in the original Fold spanned just 4.6 inches. The internal display is expected to fold out to 7.3”

The original Galaxy Fold took cues from the Galaxy S10 Plus camera from last year, so it stands to reason that the Fold 2 would do the same, based on the Galaxy S20 Plus matrix and camera design. That's the content of a rumor by Max Weinbach, a contributor to XDA Developers. Expect a:


The original Fold featured a large thumb-shaped cutout that included two camera lenses and other sensors, and detracted from the overall look and took up screen space. Samsung is expected to minimize the appearance of the camera on the internal screen, possibly reducing the space to a single sensor for selfies and video chats, and using a more minimalist perforation design. Weinbach suggested that the "main" camera could include a V-shaped notch or a lower screen sensor.

The Samsung Galaxy Fold 2 is expected to debut around July or August along with the Galaxy Note 20. Kernel source code for the Galaxy S20 confirms the existence of both phones, according to XDA Developers, while a report from Korea’s Etnews lends support to that August launch window. there will be a slight price cut for the new foldable. The price has been estimated at $1,780 and $1,980, with $1,880 to $1,895 likely being the price Samsung settles on.

Huawei’s Mate X was the only foldable to sport the screen on the outside, a design that is usually called an “outie”. Inward-folding displays are generally agreed to be the more practical approach as the fragile foldable display is protected when not in use. 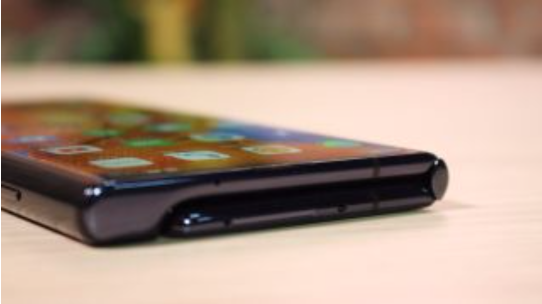 Source: CNIPA
Huawei is toying with the idea of an innie, as revealed by design patents filed with China's National Intellectual Property Administration (CNIPA) in July 2019. There are a few major observations that could be made. The foldable display will be on the inside of the phone, just like the Samsung Galaxy Fold. The inner display has no notches or cut-outs for selfie cameras, along with very slim bezels. Moreover, the same display seems to extend to the outside of the device, which can be used when the device is folded. This technically means that the phone will have the same display extending to three sides of the frame. The camera array can also be seen only on the outside, which could imply that the same set of cameras can be used for selfies too. The fourth camera in the setup has a discernibly different shape than the other sensors, and looks very similar to Huawei’s periscopic telephoto cameras. This is an odd addition as folded optics take up a lot of space inside a phone, which would be pretty challenging in a chassis so slim.