On December 10, Investor’s Business Daily said, “OLED displays, used most commonly in smartphones and TVs, boast a faster refresh rate and greater pixel density making them better for virtual reality headsets, gaming PCs and other devices with high-performance screens.” The acceptance level of the technology has taken another step up!  Meanwhile, DSCC looked at the changes in capital investment in the display industry overall and downgraded the market by 12% to 13.7b due to a 15% reduction in LCD capex based on cancellations at Infintech and Sharp SIO and the downsizing at HKC H2. As we have stated previously, LCD makers are either cutting back on expansion plans (BOE, CSoT, HKC, Sharp) or closing fabs (LGD and SDC). Some have had negative net income or are barely breaking even and generate no expansion capital. (Innolux, AUO, HannStar, JDI). China accounts for 92% of LCD spending with G10.5 fabs occupying a 50% share of all spending.

DSCC dropped its 2019 forecast, which was originally 16.4b, then 15.5b to 13.7b, reflecting the major changes in LCD spending. For 2020, DSCC latest forecast of $16.0B due to downsizing and cancellations at HKC H4 and Sharp SIO and delays at BOE B17 and CSOT T7. LCD spending was reduced by 45% while OLED spending was increased by 3%. DSCC now shows OLEDs accounting for 65% of spending at $10.4B with LCDs at 35% and $5.6B. Mobile spending jumps 335% to $6.9B and a 43% share with TV spending falling 25% to $9.1B and a 57% share. HKC and Visionox are expected to lead in spending with a 17% share each followed by China Star at 15% and BOE and Samsung at 14% each.
As Samsung Display converts a Gen 8.5 LCD line to a new quantum dot/OLED configuration.  While some of the LCD equipment can be used in the QD/OLED process, SDC faces the question of starting from scratch with all new tools, or trying to incorporate some of the existing equipment.  The production line involved is the L8-1 P1 line that began production in late 2007, and while we doubt much of the original equipment is still in use, SDC has the opportunity to upgrade some of the more typical equipment that would be common to the new process.  That said, bean counter at SDC are not going to allow engineers to just toss the old tools, despite the fact that they are likely fully depreciated, so SDC has been in talks with other panel producers who might want to buy the existing tools.

From the standpoint of a buyer, the most logical scenario would be to buy the entire line and therefore not have to purchase one-off tools, and while SDC contemplated keeping some, it seems they have agreed to sell the entire line en masse, which likely attracted more potential buyers and gives SDC the opportunity to purchase the most updated versions of tools for the QD/OLED line.  The L8-1 P1 line has a raw capacity of 80,000 sheets/month, which is substantial enough to be a standalone fab or as an addition to a large LCD complex.

It seems that Chinese panel producer HKC is the intended buyer through Samsung C&T, a Samsung Group company that specializes in construction projects, among other businesses and final negotiations are said to be near completion, SDC closed a Gen 7 line about two years ago in order to convert the shell to small panel OLED production and was said to have had the equipment melted down rather than allow it to fall into the hands of Chinese competitors, although an affiliate of a Chinese OEM was said to have acquired some of the equipment for a line it was building.  This makes it a bit surprising that SDC would sell the line directly to a Chinese panel producer, but at this point Gen 8 LCD production is so commonplace that SDC is likely not giving any proprietary information to HKC from the sale.

While headlines read “LCD is dead” (see our note yesterday), Chinese panel producers continue to build capacity and will dominate the LCD panel production business over the next few years.  While well-established Chinese panel producers like BOE (200725.CH) might be less inclined to add LCD capacity, newer producers like HKC continue to build out fabs.  HKC is currently operating a Gen 8.6 fab in Chongqing and is expected to bring on line three new fabs by the end of 2022, including a Gen 11 line in Zhengzhou and will see its share of the worldwide large panel LCD market rise from 0% in 2016 to 7.0% in 2022, and its share of the Chinese large panel LCD market rise from 0% to 13.5% over the same period. 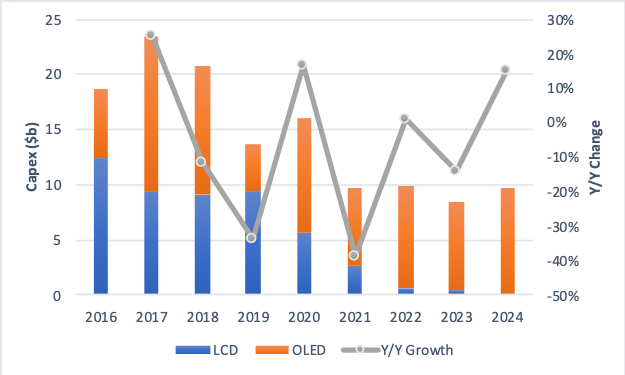 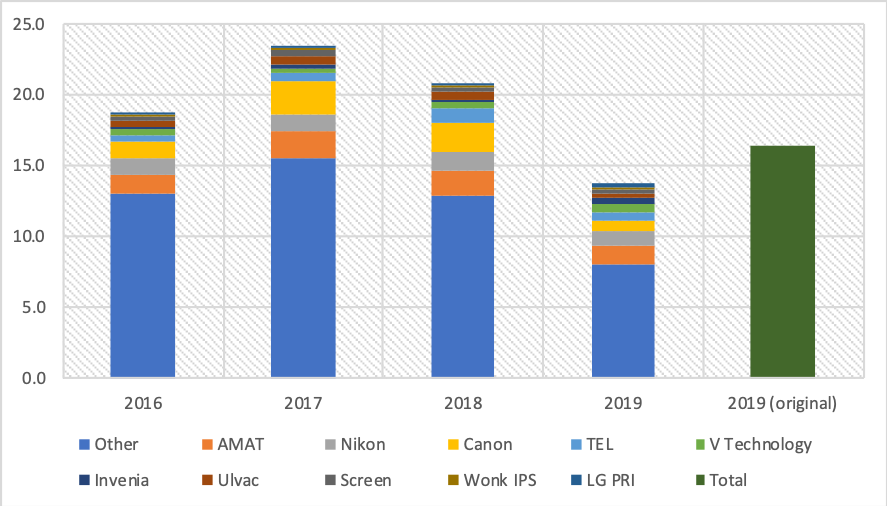