Vertical Divider
OLED Tattoos Could Be Used for Performance Monitoring

A team from the University College London (UCL) and Italian Institute of Technology produced a first-of-a-kind OLED tattoo that could be used to monitor different metrics of physical human performance, or even the freshness of food. The device is billed as the first light-emitting tattoo and can be applied much like temporary tattoos using water transfer, before being washed away with soap once its job is done. Scientists are demonstrating how smart tattoos equipped with sensors and conductive circuits can be used as touch-based interfaces for computers, or medical devices that change color to track blood-glucose levels, for example. The effort started with an electroluminescent polymer measuring 76 nanometers thick that emits light when subjected to an electric field. The polymer sits in between a pair of electrodes protected by an insulating layer with the device then applied to commercial tattoo paper. 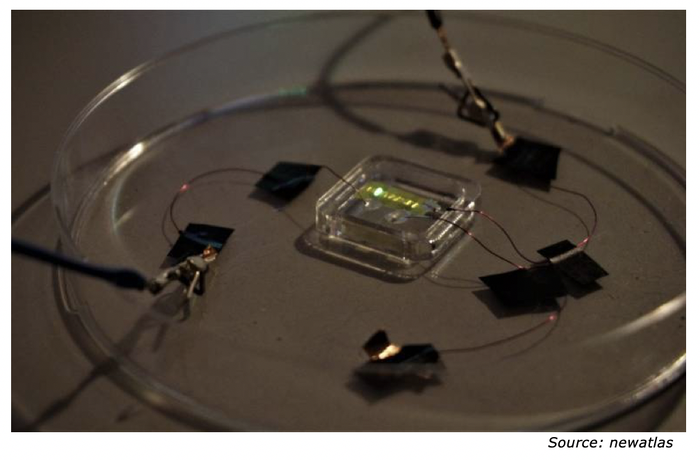 ​The resulting tattoo is just 2.3 micrometers thick and can be applied with the help of water and pressure just like a regular temporary tattoo. The team demonstrated this by applying a green OLED tattoo to a pane of glass, a plastic bottle, an orange and some paper packaging.

“The tattooable OLEDs that we have demonstrated for the first time can be made at scale and very cheaply," says UCL's Professor Franco Cacialli, senior author of the paper. "They can be combined with other forms of tattoo electronics for a very wide range of possible uses. These could be for fashion – for instance, providing glowing tattoos and light-emitting fingernails. In sports, they could be combined with a sweat sensor to signal dehydration. In healthcare they could emit light when there is a change in a patient’s condition – or, if the tattoo was turned the other way into the skin, they could potentially be combined with light-sensitive therapies to target cancer cells, for instance." Other possibilities include alerting a user when they've had too much sun or applying the tattoos to fruit to signal when it is past its expiry date. These kinds of applications are still a long way down the track, but the scientists believe the potential is very much there. Among the challenges they'll now look to overcome are integrating a power source into the design, such as a tiny battery or supercapacitor, and encapsulating the OLEDs more effectively so they don't degrade as quickly when exposed to air.