​Looking through a microscopic lens rather than a telescopic lens, market experts at DisplayWeek 2019’s Business Conference, postured that flexible OLED capacity should be converted to rigid capacity because rigid displays were outselling flexible by a 2:1 ratio. But they neglected to take into account the Chinese OEMs desire to close the gap with Samsung and Apple. Following such advise would have been a disaster because despite the drop in overall 2020 smartphone sales expectations, flexible displays are expected to grow by 62% while rigid OLEDs drop by 18%.
​
Table 1: Rigid OLED Panel Shipment Share by Supplier 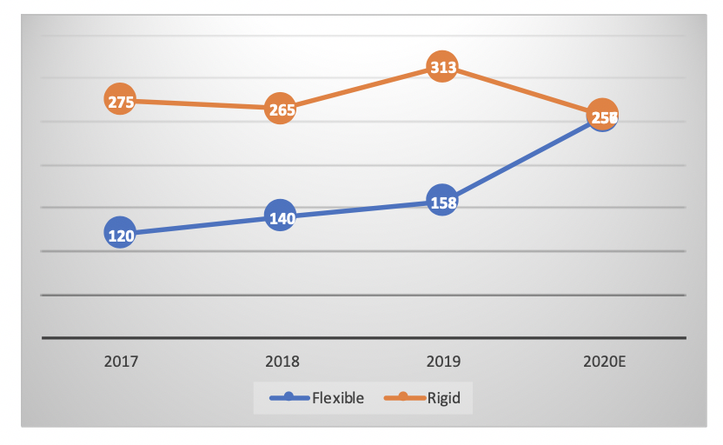 ​Source: Omdia
Shipments of AMOLED panels used in smartphones are set to soar to 513 million units this year, up from 471 million in 2019, as reported by the Omdia OLED Display Market Tracker. In contrast, worldwide smartphone shipments are expected to plunge by 13 percent in 2020 as the coronavirus impacts both consumer demand and supply-chain availability. This indicates that the penetration of AMOLED panels is rising sharply this year. This growth is entirely driven by demand for flexible AMOLEDs, whose shipments are expected to increase by 62% in 2020. Demand for foldable smartphones is helping fuel sales growth for flexible AMOLEDs and is probably understated by Omdia, since each foldable should be counted a s2 flexible displays. In contrast, the rigid AMOLED market is forecast to decline by 12 percent in 2020 due to the coronavirus pandemic and the fierce competition with low-temperature polysilicon (LTPS) TFT LCD.
Samsung Display shipped 407 million smartphone AMOLED panels in 2019, up 8 percent from 2018, with an 86 percent share of unit shipments for the year.

A recent report by technology analyst firm CCS Insight revealed yearly smartphone shipments could fall short by 13% Y/Y by the end of 2020 thanks to the coronavirus pandemic. The firm expects there will only be 1.57 billion mobile phones sold worldwide, which is 250 million fewer device shipments than originally predicted. This would be caused by both decreased supply and demand and could result in the lowest number of smartphone sales in the last decade. CSS believes smartphone shipments could drop by a whopping 29% YoY in Q2 2020, though the rest of the year looks a little more optimistic even if it doesn’t return to last year’s numbers. The advent of cheaper 5G-enabled handsets could play a role in the rest of the year’s performance increase, but sales could still decline by 3% YoY during the holiday season.

​Source: CSS Insights
*Includes Feature Phones
​
The firm goes on to say that another side effect of the current pandemic is that the next couple of years could be pretty good for the mobile industry. CSS expects shipments to shoot to 1.76 billion units next year and 1.99 billion units in 2022 thanks to increased demand. If CSS’ predictions pan out, this would lead to the highest number of smartphone shipments in the last 10 years, which would be a stark contrast to this year’s performance. The current coronavirus pandemic is taking its toll on the world at large, and it’s hitting the smartphone industry particularly hard. The COVID-19 outbreak was in full swing in China this February, which disrupted the smartphone supply chain and, subsequently, depressed consumer demand. Samsung remained on top of the industry in both shipments and sales, with Apple, Xiaomi, Huawei, OPPO and Vivo trailing behind. Interestingly, Strategy Analytics’ numbers reveal that Xiaomi passed Huawei in overall sales and shipments during this crisis. We suspect that’s partially due to the fact that Xiaomi released its latest flagship in February: the Xiaomi Mi 10. Huawei is also getting the short end of the stick because of the current US trade ban. The company has already been losing momentum in the industry and it expects sales numbers to drop as the year goes on.
​
Unfortunately, this probably isn’t the end of the industry’s woes. We will most likely see overall smartphones sales continue to decline until the pandemic blows over.