The display and the semiconductor industries typically use forward capex as a measure of their health. The standard for reporting capex has been Omdia but recently DSCC has been much more descriptive on the tool makers and their individual contribution to total display capex. DSCC released the Q2’20 edition of its Quarterly Display Capex and Equipment Market Share Report, which shows cumulative capex (2020 -2024) of $9.4b for LCDs and $44.5b for OLEDs 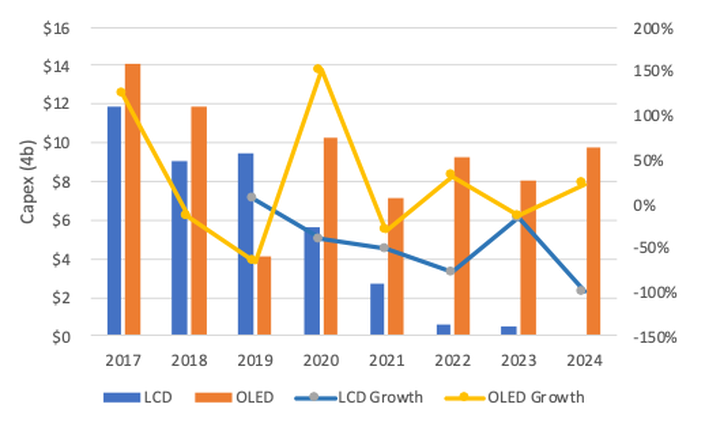 There is a substantial difference in the display equipment revenues as reported by AP Systems in 2019 and those listed as equipment spending by DSCC. The difference can be attributed to other equipment not tracked by DSCC and the revenue recognition policies. For example, they don’t track AP Systems module assembly equipment, mask making equipment, UV curing equipment or ICD’s chamber parts business. DSCC’s equipment company’s financials are provided in their Health Report, where companies are ranked on their financial disclosures.  Comparisons of company revenue vs. equipment spending is also ambiguous due to:


DSCC says it is quite futile to match companies revenue recognition approaches with panel maker equipment spending especially when the timing differs by the type of tool.