Japan Broadcasting Corp (NHK) announced in September 2019 that it has developed an organic material-based electron supply layer material in cooperation with Nippon Shokubai Co Ltd. Nippon Shokubai made an OLED sheet with a very high flexibility by using the new material, 3μm-thick ultra-thin film developed by a laboratory of Takao Someya (professor at the School of Engineering, the University of Tokyo), etc. The thickness of the sheet is 70μm or 3μm.Cathode for OLEDs. As a result, the problem of the short device life of such ultra-thin OLED sheets was significantly ameliorated, according to NHK. 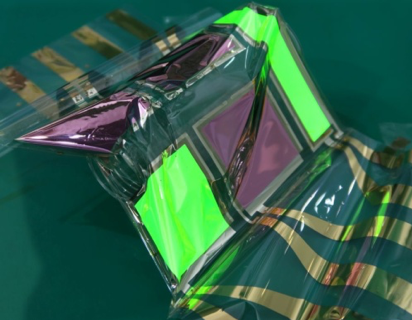 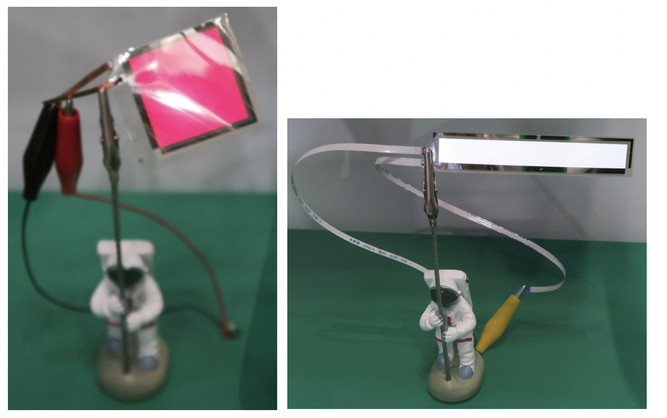 ​Source: Nikkei xTech
OLED devices use lithium fluoride (LiF, alkali metal salt)  as a negative electrode to overcome the shallowness of LUMO[1]. LiF functions as an "electron ladder" that connects the negative electrode and light-emitting layer. Currently, most OLED devices use it as an electron injection material. However, the LiF is very unstable to oxygen in the air and water and becomes a factor that shortens the life of OLED devices. High-barrier-performance sealing material is used to prevent the invasion of oxygen and water by using a glass substrate,

Very-thin flexible OLED display that can be rolled up, requires PI or UTG or TFE to ameliorate the barrier issues.  NHK Science & Technology Research Laboratories (NHK STRL) and Nippon Shokubai worked on this problem for more than six years using two strategies.


Using "inverted OLED (iOLED)," NHK STRL and Nippon Shokubai drastically increasing device life with a glass substrate in 2013, but this first strategy doesn’t address the thinness requirement and they then developed an electron supply material with high stability in air. NHK STRL and Nippon Shokubai announced that they have realized the revolutionary electron supply material to some extent. They newly developed electron supply material by mixing (1) "spB-BPy2"* (polycyclic organic material including nitrogen (N) and boron B)) and (2) "DBN (1,5-Diazabicyclo(4.3.0)non-5-ene)," which has a strong basicity*, with a mass ratio of 1:2.
*spB-BPy2 = 6"-(4-([2,2'-bipyridin]-6-y)-2-(5H-dibenzo[b,d]borolyl)phenyl)-2,2':6,3"-terpyridine
*basicity = the strength of the power of receiving protons (H+) from a reaction partner (acid) (Brønsted-Lowry's theory)

Details of the newly-developed layer structure of OLED device and the electron transport (supply) layer material. Of the two molecules in the electron transport (supply) layer, the smaller one is DBN that has a high basicity and is positively charged, and the larger one is spB-BPy2 that is negatively charged. As entire molecules, there is polarization.

NHK STRL  found that DBN and spB-BPy2 are bonded (hydrogen bonding) by sharing H+ in the mixture. Moreover, bonded molecules on the DBN side are positively charged, and bonded molecules on the spB-BPy2 side are negatively charged. In other words, there is polarization. "Due to the effects of the polarization, it is possible to smoothly supply electrons," NHK said. "We found that hydrogen bonding improves the efficiency of electron injection," according to the summary of the thesis. "So, it can be a new method and index to control the behavior of electrons in organic semiconductor." 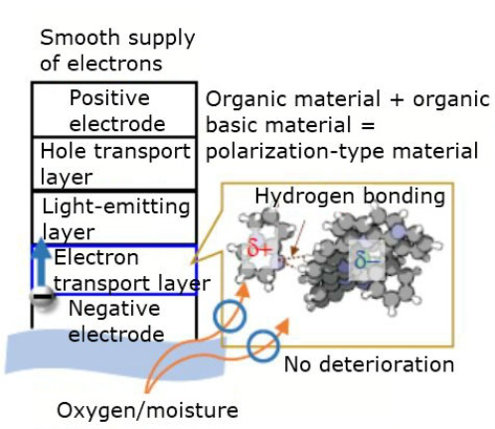 Source: Nippon Shokubai
Whether this approach obviates the need for encapsulating the organic emitters was not addressed by the researchers and it is likely that some form of encapsulation will be necessary
​​
[1] *LUMO = lowest unoccupied molecular orbit. It is the lowest energy state of a light-excited electron in an organic material. The energy difference between LUMO and vacuum level corresponds to the work function of metal, inorganic semiconductor, etc.