Cadillac’s previewed its Lyriq all-electric luxury crossover with a 33” OLED display, which runs from the driver’s left, encompasses their instrumentation, and flows seamlessly into the center stack infotainment. It’s an evolution of the interface seen in the latest-generation Escalade, which has a similarly curved layout but uses separate screens. 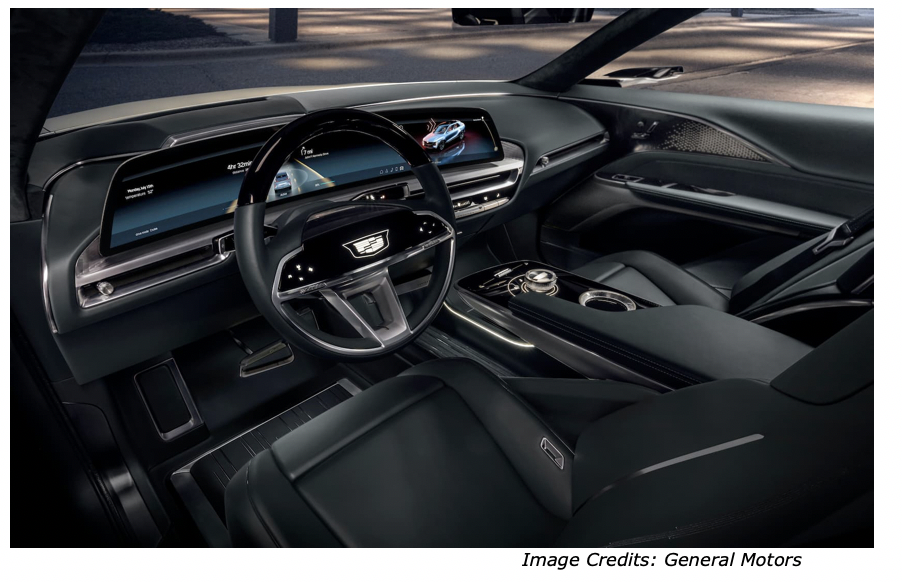 ​Cadillac has fitted more displays in the rear, with the second-row passengers getting their own, individual panels mounted in the back of the front seats. A further touchscreen sits in-between them, with access to HVAC and other controls. All in all, it’s as futuristic as you’d expect from the brand’s first step into full electrification. All the same, as we saw with previous Cadillac infotainment offerings, there’s more to it than just slick hardware. CUE, as the older version of the automaker’s infotainment used to be known, gained a reputation for being visually intriguing but a pain to actually use in practice. Things improved over further iterations, and the system in the 2021 Escalade is a considerable step forward in usability, but for the Lyriq it goes even further.
Cadillac teamed with Territory Studio and Rightpoint, better known for their work on movies, games, and in creating 2D and 3D real-time graphics. Territory, for instance, worked on Cyberpunk 2077 and Forza Motorsport 6; Rightpoint counts the Six Flags mobile app among its clients. The result is something that looks familiar in terms of Cadillac’s aesthetic, but is more straightforward to use. So far, Cadillac hasn’t shown much of what the results of their handiwork will look like. There’ll be more of a focus on interacting with virtual models of the car, similar to how one might outfit a character or vehicle in a video game. Instead of digging through menus to find information on tire pressure, for example, tap the wheels on an on-screen graphic to pull those details up.

It’s not the first company under General Motors’ umbrella to look outside for infotainment inspiration. GMC, for example, hooked up with Epic Games’ Unreal Engine to power the interface in the new Hummer EV, the first time the platform had been turned to automotive purposes.