Vertical Divider
Next Galaxy Z Flip Design Could Include a Rotating Camera
​
A new Samsung patent has revealed a Galaxy Z Flip-style device with a rotating camera.
​Under-display selfie cameras have become a holy grail of sorts for manufacturers, with ZTE still being one of the only major brands to offer phones with this feature. We’re expecting the Samsung Galaxy Z Fold 3 to offer this tech though, but it looks like Samsung is also thinking of another out-of-the-box approach to cameras.
Let’s Go Digital uncovered a Samsung patent filing with the World Intellectual Property Office (WIPO), showing a Galaxy Z Flip series phone with a flipping camera mechanism. Check out the images below. 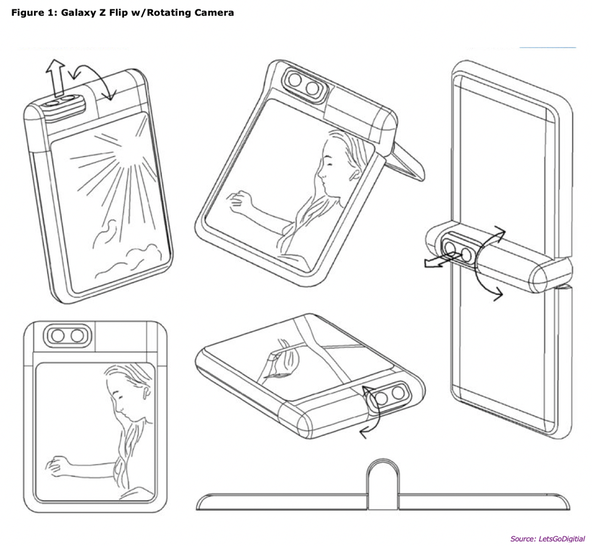 ​The drawings reveal a flipping camera system that would allow you to take standard photos as well as selfies in conjunction with the secondary screen (much like the existing Z Flip phones). But it also seems like Samsung might be taking inspiration from the Asus Zenfone 8 Flip. More specifically, it looks like the camera system is able to stop at multiple points. A camera system with the ability to stop at multiple points means you can shoot from multiple angles, making for a more versatile camera experience in theory. We’ve also seen Asus use its motorized swivel to deliver panorama shots without needing to move the phone, so this is another possibility on paper.
It doesn’t seem like this camera setup will support taking selfies with the foldable main screen though. So the Galaxy Z Flip based on this design would have a traditional or in-display selfie camera instead. Another potential downside is the huge bump created by this hinge and camera system, suggesting that the unfolded phone won’t be flat on its back.