The Galaxy Note series have made a huge impact in the smartphone industry since the first model launched in 2011. Sadly, it may have come to the end of the road for the stylus-toting smartphone line according to news coming out of Korea. Samsung’s next Galaxy S flagship smartphone series, which could be marketed as the Galaxy S21 or Galaxy S30 series, are expected to launch in early 2021. The Elec reports there will once again be 3 separate models and the top model will feature S Pen support. The S Pen is an inductive stylus with Wacom’s digital pen technology that works on all Galaxy Note devices with an active digitizer layer underneath the display. Although it doesn’t require a battery to function, Samsung did add a battery to the revised S Pen they launched alongside the Galaxy Note 9; the battery powers a small Bluetooth Low Energy chip and a six-axis motion sensor that are used for gesture detection. The most recent upgrade to the S Pen came with the Galaxy Note 20 Ultra, wherein Samsung significantly reduced the latency down to 9ms to make writing feel much more responsive. The upcoming Galaxy S series, code-named “Unbound,” will come in be three models, named M1, N2, and O3, with the top-end O3 model featuring S Pen support. This “O3” model may be marketed as the “Ultra” device. Bringing stylus support to the Galaxy S series, puts the future of Samsung’s Galaxy Note line in question as there is very little difference between the O3 Model and the next Note. With the addition of S Pen support there is virtually no difference between the Galaxy s and the Galaxy Note as shown below. 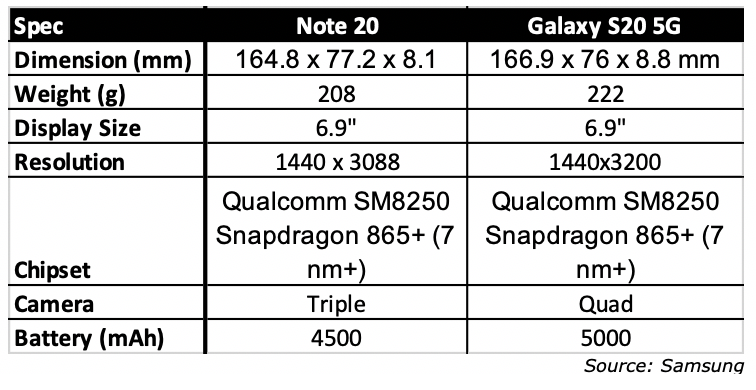 ​Samsung is also gearing up to introduce a Galaxy Z Fold “3” with S Pen support, which was rumored for the Galaxy Z Fold 2 before its launch.