In 2019, LG shipped 3.2m TV panels and is expected to grow that volume to 6.2m in 2020 as their new line in Guangzhou, China goes into full operation in early 2020, improving the company’s performance, Hi Investment & Securities forecast on Dec. 12. “LG Display needs to operate the OLED line in Guangzhou to expand its OLED TV panel shipments from next year,” said Jung Won-seok, a researcher at Hi Investment & Securities. Currently, LG Display’s OLED production lines in Korea are operating at a rate of about 90 percent. Initially LG Display was expected to start the operation of the OLED plant in Guangzhou in August this year, but the schedule was delayed by yield stabilization work. “LG Display will reduce its money-losing LCD panel business in sales and fill the void with large OLED panels, which are profitable,” Jung said. As LG Display shuts 7th- and 8th-generation lines in Korea beginning early next year, its LCD TV panel shipments are expected to fall by about 16 million units next year. But as the average price of an LCD panel is as low as US$90, the cut in LCD production could actually increase earnings. The average unit price of OLED TV panels is expected to reach US$700, even as panel prices are lowered to absorb cost savings to expand the OLED TV panel market. “LG Display’s overall sales will grow by more than 1 trillion won in 2020 compared with this year due to increased shipments of OLED TVs,” Jung added. LGD, which shipped ~3.5m TV panels in 2019, and should grow the volume to 6.2m in 2020, which would generate ~5.1t won in sales. Jung said, “The company is expected to post 24.5t won in sales and 396 billion won in operating profit in 2020.” 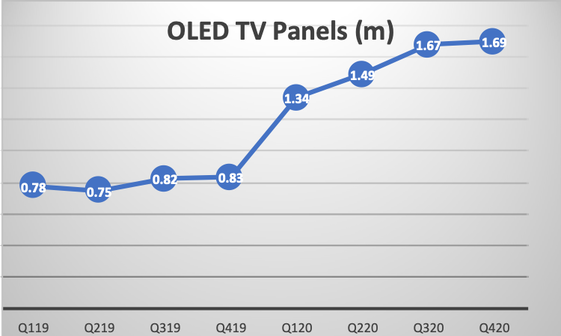 Source: DSCC, OLED-A
​
Huawei and Xiaomi, will be selling OLED TV sourcing OLED TV panels from LG Display. Vizio and Hisense will use OLEDs to expand its TV line-up in the US. According to Business Korea LG Display cannot meet orders from corporate customers, so the company is on allocation, but that should be relieved as the Guangzhou reaches full production in 2020.