A rapid increase in liquid crystal display (LCD) panel prices has sharply narrowed the price gap between LCD panels and organic light-emitting diode (OLED) displays – the latter showing a downward trend due to increased supply. LCD panel prices have been climbing steeply since the first half of last year and rose to their highest level in almost four years this month, with Chinese manufacturers keeping LCD panel supply under control to shore up prices. By contrast, LG Display Co., the world's largest OLED TV panel maker, has been ramping up OLED production to accelerate its penetration into the TV market.

According to market researcher Omdia on Apr. 19, the average price of the industry-standard 55-inch OLED panel dropped to $510 in the first quarter of this year, compared to $200 for LCD panels. Year on year, OLED panel prices declined 8.1% on average, whereas LCD panel prices spiked 73.9%. As a result, the price gap between the two has narrowed to $310 from $440.

Since the beginning of this month, LCD panel prices increased further to hit $206 on average, their highest level in three years and 10 months. It marked the first time for the average LCD panel price to top $200 since July 2017. 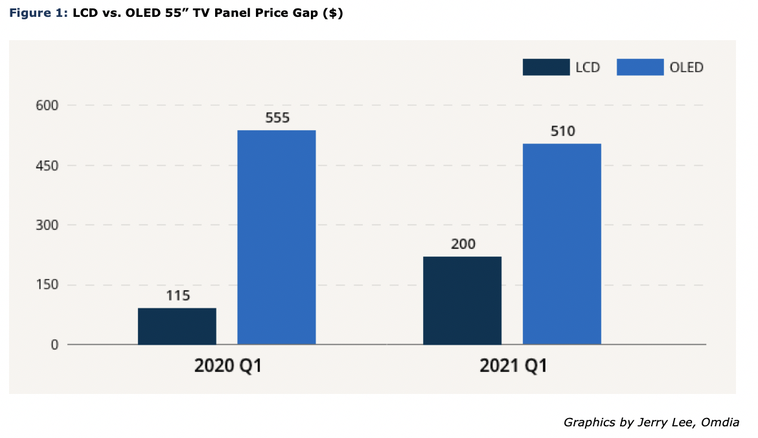 ​"TV makers have a shortage of LCD panel supplies, with their inventory falling to 60% of normal levels," said KB Securities analyst Kim Dong-won. "They will also continue to suffer supply shortages of other major components such as glass substrates and ICs (integrated circuits) through the second half of this year."

Since South Korean panel makers led by Samsung Display Co. and LG Display pulled out of the low-margin TV LCD market from the second half of last year, Chinese manufacturers led by BOE and CSOT have filled the void. They had rapidly expanded their presence in the LCD market, flooding the market with cheaper products such as 10th-generation panels measuring 2,900mm in width and 3,100mm in length. Chinese manufacturers are now scaling back on LCD panel production to bolster margins.

In the OLED market, by contrast, LG Display has been stepping up supply. Since its Guangzhou plant started operation in the second half of last year, LG's glass substrate production for OLED panels has more than doubled to 130,000 units a month from 60,000 units. That led to the price cut of OLED TV panels.

Thanks to the reduced price gap with LCD panels, Omdia forecasts that global shipments of OLED TVs will climb to 5.80 million units this year, up 59% from 3.65 million in 2020. 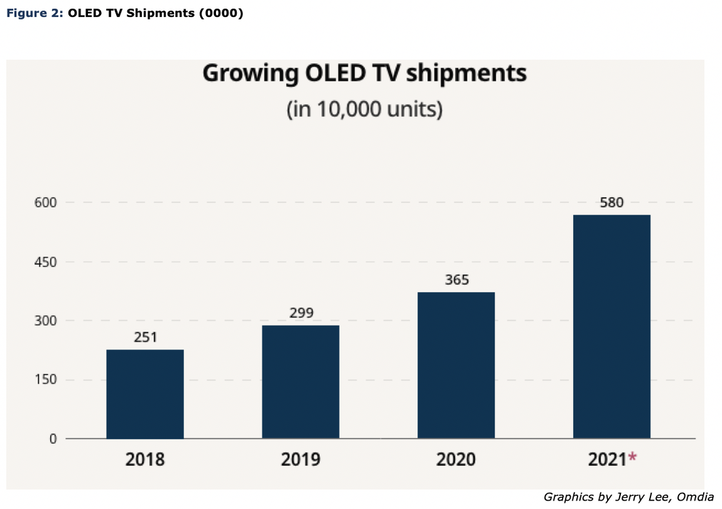 ​LG Display plans to boost its OLED TV panel shipments to as many as 8 million units this year from 4.5 million units in 2020. Based on its shipment goal, analysts expect global OLED TV sales in 2021 to double from last year's number, with more than a 10% share in global TV sales.

Amid the rosy OLED TV market outlook, the focus is now on whether Samsung Electronics Co. and China's TCL and Haier will make their forays into the market. 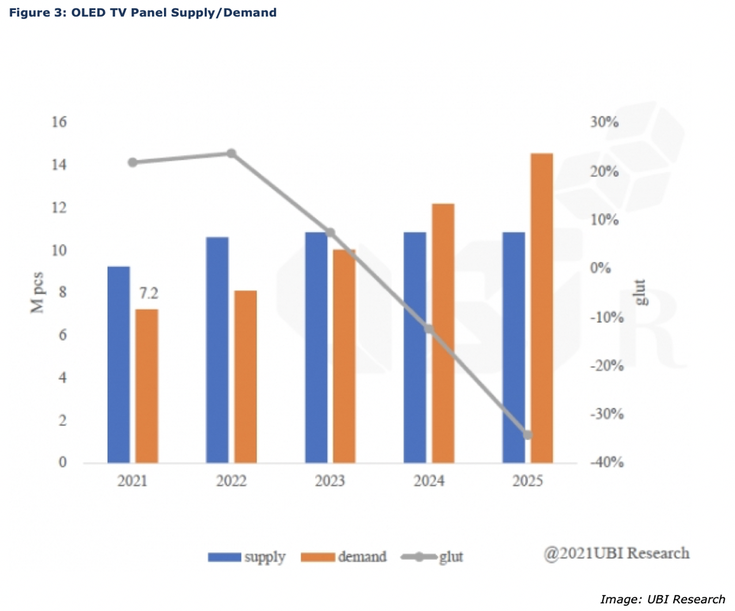 Yi based his forecast on the production capacity for large-sized OLED panels and there expected demand going forward.

LG Display is currently the sole supplier of large-sized OLED panels. Its current production capacity for the panels is around 10 million units a year. It has production lines in Paju, South Korea and Guangzhou, China.

​Unless the company expands its capacity, demand will outpace supply by 2 million units in 2024, the CEO noted.

Yi said LG Display may commence expansion of its capacity earlier than scheduled in light of this possibility. Last January, LG said it plans to start spending in expanding its Gen 10.5 (2940x3370mm) OLED production line in 2023.  Yi expects LG Display to start investing no later than next year as it will take time to reach the production yield rate in a Gen 10.5 line, since the Gen 10.5 will be the 1st of its kind. Yi demand forecast is based on those from LG Electronics, Sony and other of LGD’s OLED panel customers.