MicroLEDs were center stage at DisplayWeek, with the promise of OLED performance but higher lifetimes, luminance and lower power consumption. The MicroLED presentations at the Business Conference, Symposium, Seminars and Short Courses hailed the technology as the ultimate display solution, with the caveat that costs prevented their widespread adoption. What created the high costs was the relatively low yields from MOCVD (<95%) production and the immature transfer technology.
The unmentionable was the low efficiency of red and green LEDs, which gets exaggerated as the LED size decreases. The co-called green gap has existed since LED inventors found that red and green were much less efficient (25% to 50%) than blue LEDs. Nichia discovered that yellow phosphors on blue LEDs was the most efficient approach to producing white light for LCD backlights before Samsung created QLEDs that replaced the yellow phosphor with red and green color converting QDs.
Since the creation of QDs, LCD display backlights have been largely unchanged. Despite, all the innovations of MicroLEDs, to make RGB displays, blue LEDs, plus some form of color conversion, most likely QDs will be required. Color conversion will reduce the luminance by ~50%. Essentially, when the efficiency is reduced by 50% it falls into the realm of OLED performance taking away the power consumption and perhaps the lifetime benefit.

On Friday, with less than 75 viewers, Seth Coe-Sullivan, a founder of one of the early QD start-ups that was eventually sold to Samsung gave a presentation on “Submicron LEDs for MicroLEDs” being developed by NS Nanotech, a company he recently founded. NS Nanotech is solving the green gap problem at the molecular level.  Using a technology, which has the acronym CSTIPMITBGL or nanoLEDs they designed columns smaller than the wavelength of light; 2D lithographic sub nanometer periodic lattice photonic bandgap that overlays the semiconductor bandgap. One of the major breakthroughs is the uniform growth with high Indium content, enabled by an MBE process (today’s LEDs use MOCVD) and the ~200nm nanocolumns.  The LED to LED uniformity, is a function of Indium concentration for a semiconductor bandgap-based LED. The NS Nanotech devices are controlled by their photonic bandgap - which is controlled with x/y lithography to sub-nm accuracy, far better (>10x) than MOCVD Indium doping which is controlled to ~1%. 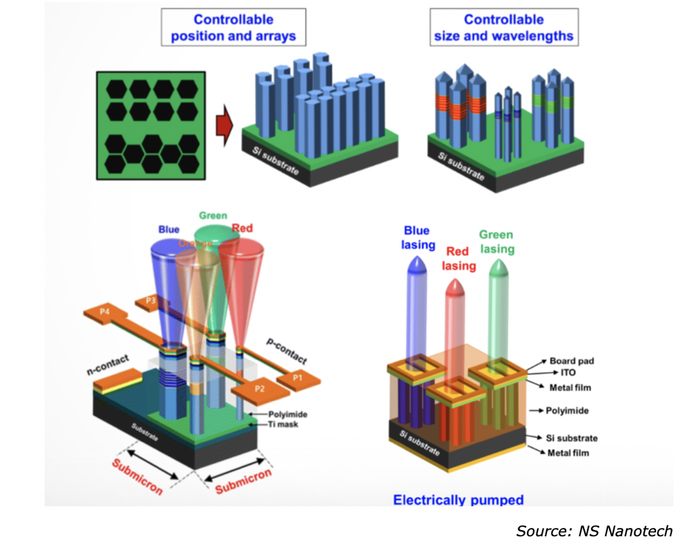 What results is an LED that is smaller than the wavelength and the Indium content is highly uniform across all the nano LEDs. By varying the width of the LED, virtually any color can be produced, making it possible to grow red, green and blue nano LEDs on the same substrate and the substrate material can be sapphire, silicon or something else.

Not only can they produce high efficiency LEDs, the Indium content is uniform between LEDs.  This process solves two problems that have faced LED manufacturers forever:

​It could be argued that the red LED has already been developed using AlInGaP. But AlInGaP is highly temperature dependent- small changes in temperature lead to large changes in color, efficiency and reliability, so relatively low operating temperatures are used.  InGaN has lower temperature dependence and can operate at higher operating temperature.  In an RGB configuration with two different materials sets trying to co-exist, the system must operate at the "wrong" temperature, for one of the sets or somehow create two thermal planes to support each material. The practical solution has been to use blue InGaN LEDs with a QD color converter to produce the red and green.

The technology was pioneered by Professor Zetian Mi, after 10 years of work at McGill University and the University of Michigan, Mi has also joined NS Nanotech. Seth has a practical get to market strategy of producing nano LEDs that eliminate most of the cost gap between standard backlights and Mini LEDs. The company will begin by delivering 200mm wafers of single color nanoLEDs (blue) to developers of MiniLED backlights. As they progress, the wafer size will be increased, and they will advance the mixed color wafer process at which time their solution could support MicroLED displays, assuming an economical and effective transport mechanism is available. The company is only 6 months old, has made rapid progress and could have their 1st commercial product ready by 2021. In the interim they will supply test wafers to potential customers for qualification purposes.