The ability to sense objects in the path of a vehicle has allowed for the implementation of systems such as adaptive cruise control (ACC), which maintains spacing with the vehicle in front. Smartphone OEMs, namely Apple have piggy backed on the technology to improve the focus of their camera lens. LiDAR will be a key enabler for the fully autonomous vehicles of the future. LiDAR systems are small and light enough to be carried by drones, opening up a much faster (and therefore lower cost) way of surveying large areas with more accuracy than manual methods. The applications here are almost limitless and include monitoring environmental impact such as coastal erosion, flooding, or melting ice. The impact of natural disasters such as earthquakes or volcanoes can be assessed rapidly and safely, allowing aid to be provided more rapidly and effectively. Farmers can use LiDAR to survey their land and assess the condition of crops. And infrastructure projects such as roads or railroads will be able to survey proposed routes and chart progress with ease. Moreover, static LiDAR can be fitted to large containers such as silos or tanks to accurately measure the contents without requiring any contact with the contents.

Samsung Electronics does not plan to integrate ToF (time of flight) technology into its next strategic smartphone. According to industry reports, the ‘Galaxy S22’ expected to be released in the first quarter next year will not incl8de the technology. Samsung Electronics decided not to integrate the technology into its next strategic smartphone as consumers’ responses towards the company’s camera system that is not integrated with the technology are not so bad. ToF technology calculates a distance based on the time it requires for a light to return back to the camera after it reflects back from the subject and recognizes the subject’s dimension, spatial information, and movement. Samsung Electronics has used the technology starting from the Galaxy S10 that was released in the first quarter of 2019. It integrated the technology for the Galaxy Note 10 that was released in the same year and the Galaxy S20 that was released last year as well. As number of smartphones that are integrated with the technology started to increase, the company also increased number of partnering companies that make ToF sensor modules.
​
LiDAR (light detection and ranging) is a sensing technology that’s similar to radar but uses light instead of radio waves. It applies the principles of reflected light and accurate timing to measure the distance of an object. LiDAR permits superior depth sensing due to its high levels of depth and angular resolution. It operates in all light conditions due to the active approach that uses an infrared light transmitter along with a receiver. mLiDAR is more sophisticated than just a distance measure. It can also be used in 3D mapping and imaging, making it very appealing in an engineering context as well as a very useful practical technology. There are different approaches to LiDAR,


Figure 1: Direct time-of-flight (dTOF) measures the time taken for light to travel to the target and back

Of the two approaches, iToF is more common. It’s generally better for shorter-range applications and where the ambient light levels are well-controlled. Conversely, dToF can be used in long- and short-range applications. It is faster and can measure more than a single echo, giving it the ability to detect multiple objects. For a LiDAR system to work effectively, the return signal must be detectable within the ambient light that the system is required to work within. Clearly, this is easier indoors where light can be controlled, but many of the most exciting applications for LiDAR are outdoors, so a solution is necessary.

Improving Signal-to-Noise Ratio (SNR)
Using the ASTM G-173-03 Solar Irradiance Model, the peak of solar noise (light) is shown at a wavelength in the range of 500-600 nm—the visible spectrum. Noise in the near-infrared (NIR) portion of the spectrum (around 905 nm) has fallen to half, meaning that light at this wavelength is easier to detect.
Better results could be achieved by moving to the shortwave infrared range (around 1550 nm). However, emitters and detectors are somewhat more expensive, leaving the NIR range as the best option for price/performance. 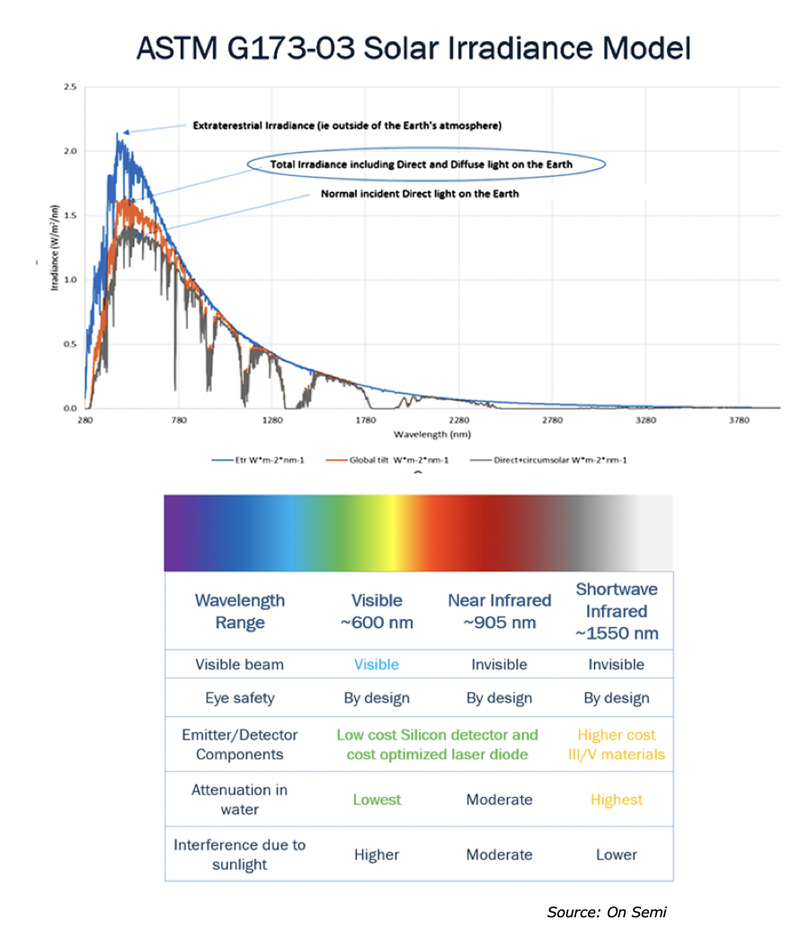 While it’s intuitive that simply increasing the emitter’s power would address SNR issues and improve accuracy and range of a LiDAR system, the light emitted can be harmful to humans and animals. International standards such as BS EN 60825-1:2014 stipulate the power that can be transmitted. With limited power available, other techniques have to be adopted to increase the useful range. Using a multi-shot light can significantly improve SNR and range, while keeping the energy within each pulse low. In this approach, multiple pulses are fired, creating a histogram of the timestamps of detected echoes.

Figure 3: Multi-shot dToF allows the target to clearly distinguish itself from background noise 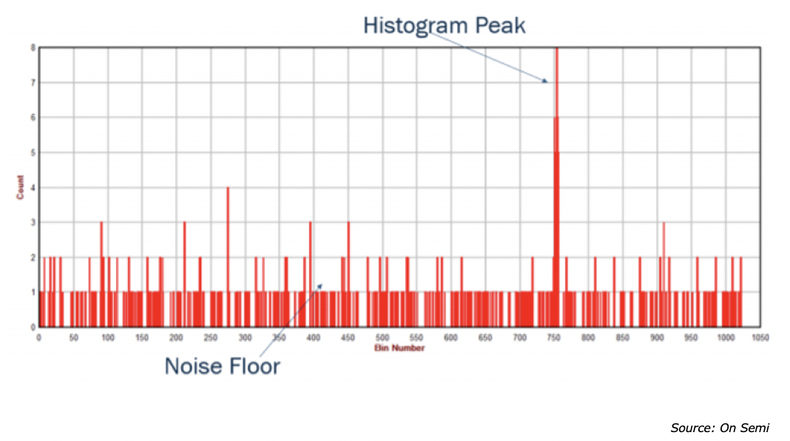 The resulting histogram clearly shows the ambient photons that are detected at random times. Thus, it creates a “noise floor” on either side of the histogram peak, where the majority of echoes are returned at the same time interval, representing the target object.

Recently, advances have come forth in detector technology as well as the methods used to create 3D maps. Early detectors were typically PIN diodes or avalanche photodiodes. These have been superseded by single-photon avalanche diodes (SPADs) and silicon photomultipliers (SiPMs), which integrate a dense array of SPAD sensors into a single device. Compared with earlier solutions, SPAD and SiPM sensors offer low-voltage operation, excellent uniformity, and very high gain along with the ability to detect a single photon of light energy. While the ability to measure the distance of a remote target object is very useful, the real strength of LiDAR lies in its ability to create detailed and highly accurate 3D maps of surfaces—whether it involves an object in a factory setting or, on a much larger scale, a large piece of land. By combining the principles of LiDAR with a scanning optoelectronic system, the beams of light can be steered to create dense depth point clouds of a scene. This can be achieved mechanically by physically rotating the laser emitter to cover all areas of the scene. However, this approach is generally large and high cost, and it has challenges with alignment.

A more modern approach is to use quasi-solid-state systems such as microelectromechanical systems (MEMS) mirrors, liquid-crystal meta-surfaces (LCMs) and optical phased arrays (OPAs) to steer the beam across the system. The solution is more reliable because it’s almost solid-state and very efficient for long-range applications. The only truly solid-state approach to LiDAR mapping is to use an array of emitters and sensors (SiPM or SPAD) and flash the scene. Flash illumination is only suited to short-range or narrow field of view (FoV) due to the power limitations upon the emitter. A multi-point flash illumination approach can be used whereby an addressable array of emitters (usually addressable VCSEL array) illuminates different parts of the scene sequentially and in sync with the detector readout. 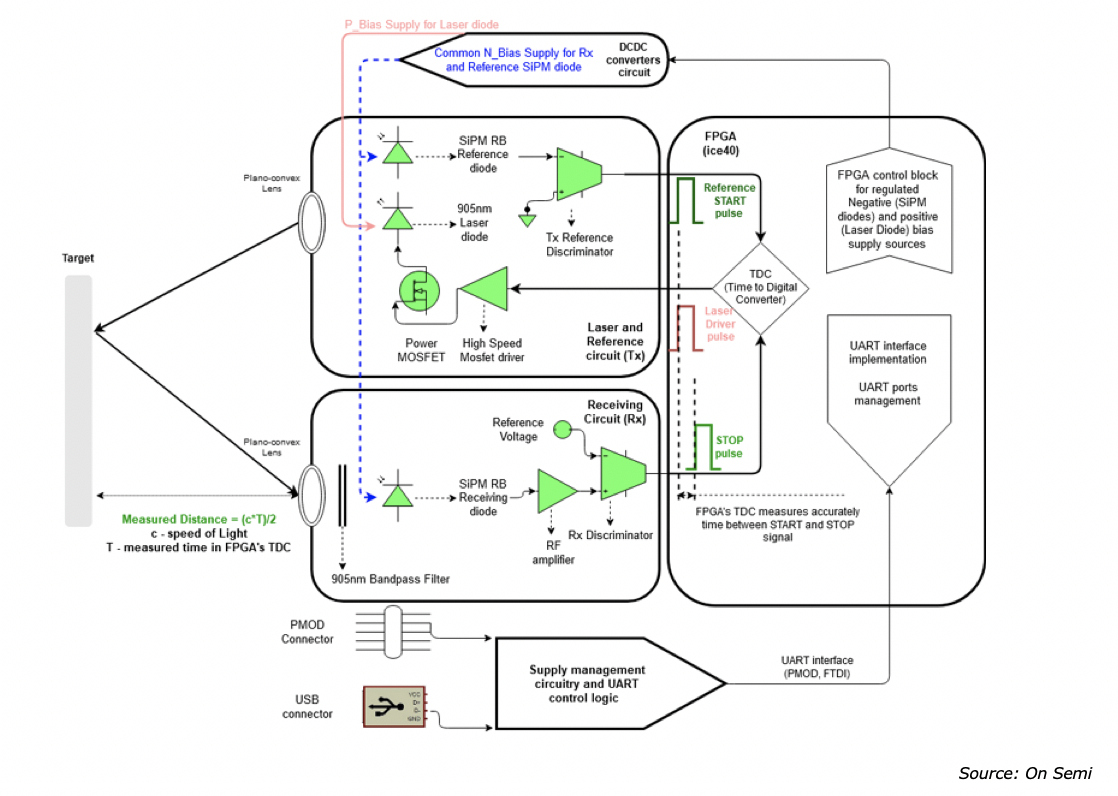 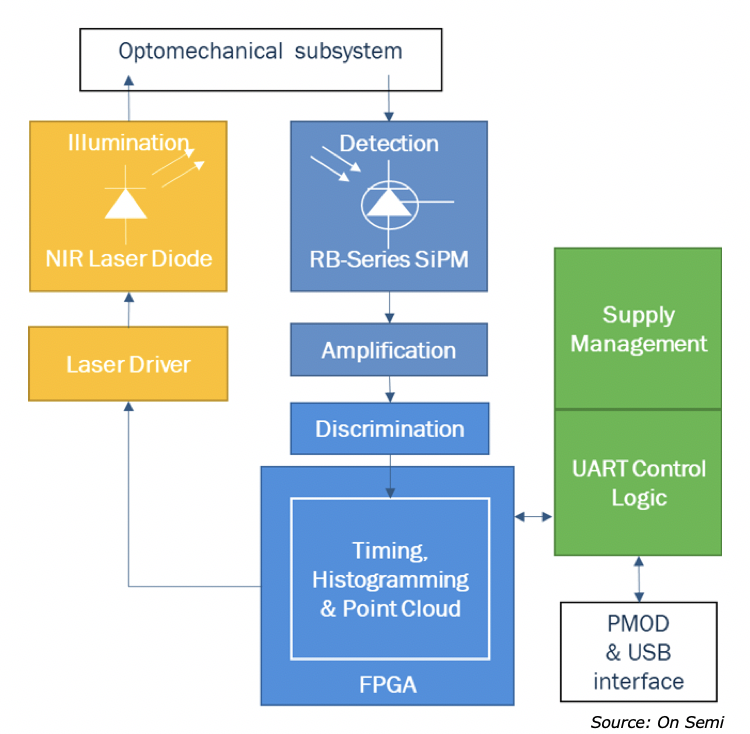 The laser emitter is designated Class 1, thereby meeting all eye safety standards, while allowing the operating range to extend to 23 m. The configuration and monitoring of the platform is eased by the inclusion of a simple-to-use graphical user interface (GUI).
Once development and debugging are complete, the transition to manufacturing is seamless. That’s because the cost-optimized platform is mass-deployment ready and all necessary manufacturing files are readily available.
​
LiDAR is an incredibly useful technology that allows for the measurement of distance and facilitates the creation of accurate and detailed 3D mapping. Through the careful selection of wavelengths and the use of multi-shot light pulses, the SNR can be improved for long-distance measurement, even with power consumption and safety constraints placed on laser emitter power.
Applications for LiDAR technology are very broad. In the future, the technology will allow us to understand our world better while making it safer, too.