​Using this formulation, $53 left to manufacture 25m die for 4K or 100m die for 8K, pick them up from a wafer and place them accurately on a display substrate to meet the costs of an OLED panel.  µLED dies are currently produced on sapphire, SiC or Si wafers 4”-8” in diameter. The vast majority are made on 4” wafers, but a number of companies plan to use 12” (300mm) wafers.  The next table shows the number of die that can be produced by die and wafer size. 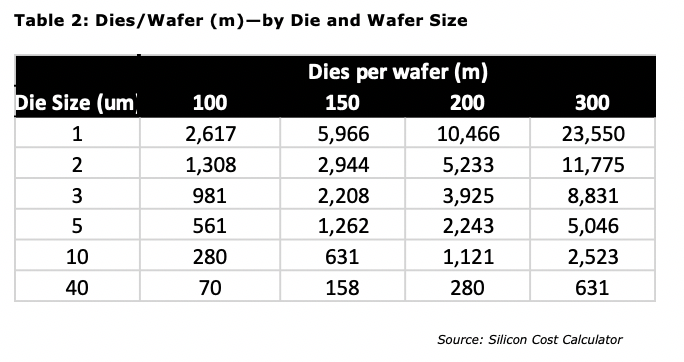 ​Accounting for yields of 90% and wafer costs of $500, $750, $900 and $1400 for 4”,6”,8” and 12” finished wafers, respectively the cost per panel for 4K and 8K µLED are shown in the next table.  The die must be converted to chips and when transported must absorb the transport yield and the subsequent repair cost. Also, if used in a blue backlight with a color filters some redundancy will be required. The assumptions made used were:


The full cost of the µLED is shown in the table on the right.

​Subtracting the uLED cost per panel from the savings from not using an OLED, provides the available expenditure that can be devoted to mass transport. The saving per panel is then converted to capex, by multiplying it with 900K panels per year and assuming 6 years of depreciation. If the comparison was against the Gen 10.5 OLED fab being planned by LGD, the µLED 8K would be substantially more challenging, leaving only 1 and 2 µm dies as the feasible solutions. In the following tables, yellow signifies feasible solutions. 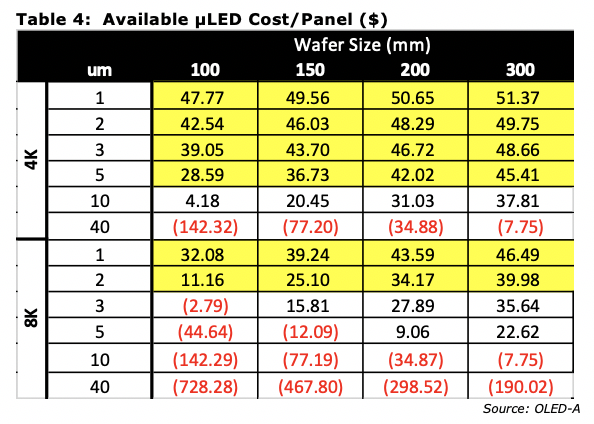 ​The next table shows the minutes required to mass transfer the dies based on resolution and transfer speed; followed by the number of tools needed to achieve a 2-minute TACT, similar to OLEDs.

​The final table shows the capex available for a mass transfer tool based on the transfer speed and the savings available, after the uLED cost is subtracted from the savings.

​Since no mass transfer tools are available for mass production other than Pick and Place, which operates at 400 die/minute, we assumed the capex would be close to the cost of a Gen 8.5 IJP, which is ~$25m. It is likely that the transfer speed will be a minimum of 2.5m die/minute for 4K and 5m die/minute for 8K.

There are 10s of approaches to mass transfer, but only three that offer the possibility of more than 1m die/minute. They are fluidic assembly, laser transfer and micro printing. Speeds have been published but not demonstrated or validated.  However, Samsung Display has a prototype environment using the QD-OLED process flow but replaces the VTE deposited blue OLEDs with IJP blue nanorods. The new process could be in production as early as 2024, should Samsung management make the go-ahead decision in a planned review meeting later this year.

The opportunity for 4K µLED TV is very large.  By 2026, the Advanced TV market is expected to reach 50m units (25% of all TVs) and 90% of  these TVs will have 4K resolution according to DSCC.

​An alternative approach is to use red, green and blue µLEDs and eliminate the need for any color conversion. However, the side-by-side pixel design would require redundancy for each pixel doubling the die count. Instead a nano LED design is being developed where a 1 µm die would have up to 50 emitters and all the LEDs use a CNT construction with GaN and have the efficacy of blue. These nanoLEDs are being developed by ns Nanotech, Aledia, GLO (recently purchased by Nanosys) and Porotech.