This article appeared in Display Daily by Dr Khasha Ghaffarzadeh is CEO and Founder at TechBlick, on the state of the art of printing in displays.  In previous articles, we showed that it would require a throughput of ~500,000 μLED to put the technology in a competitive position in the most desirable and applicable TV market. Unfortunately, even with all the approaches and all the investment none of the technologies are close to the mark

Parc, a Xerox company, uses xerographic printing, where GaN MicroLEDs are suspended in a solution. They are then cast onto an active-matrix substrate controlling a 2D array of electrodes which generate electrostatic force to spatially move the individual chips under the gaze of a camera. The assembled microchips are then transferred using a roller onto the final target substrate. The 2021 demonstrator is 2.5 x 2.5 cm on 50μm LEDs with no yield data. The assembly process uses a projector addressing a photo switch array. The assembly process- from mass disordered deposition from liquid to final alignment- is shown below. Currently it is too slow, but an order of magnitude improvement can make it competitive. The Technique does not require any special microchip structure. The alignment and positioning are also software controlled, thus allowing arbitrary and complex shapes. 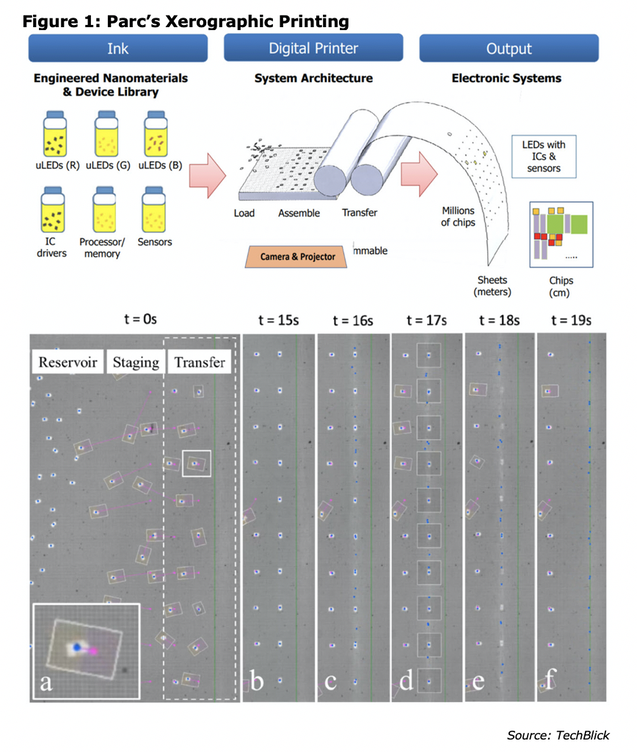 ​The transfer step has been receiving substantial attention in recent years. There are many other critical steps in MicroLED production too. I mention this because printing and conductive inks can play important roles in some of these steps too.
The image below, by Applied Materials, shows various examples using conductive inks. Screen printing can be used to print conductive pastes to fill vias. It can be used to print fine-line electrodes between the front and backplanes. Furthermore, it can also print wrap-around electrodes, connecting the MicroLEDs with the driver IC. Finally, it can print various adhesives (solder, ECA, etc.) for the placement and bonding of micro-LEDs. 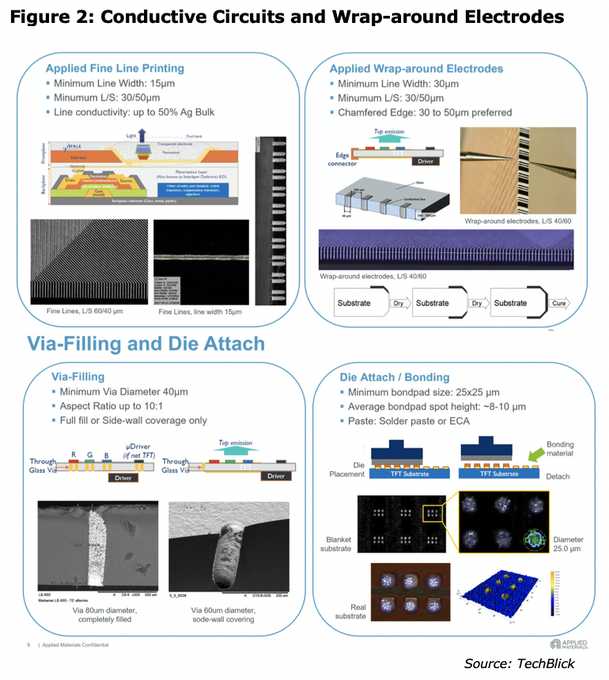 Printing can, without requiring a vacuum-based PVD process and etching, print fine-line electrodes and interconnects, create wrap-around electronics, fill vias, and even place attach materials. PlayNitride has developed a tape-on-reel approach where MicroLEDs are first transferred into a larger panel and are then cut into smaller tiles. The tiles undergo an inspection step, and the black filling material is added to enhance contrast. The tiles are then added onto a reel, creating a tape-on-reel approach enabling the construction of large MicroLED displays using a SMT-like process. 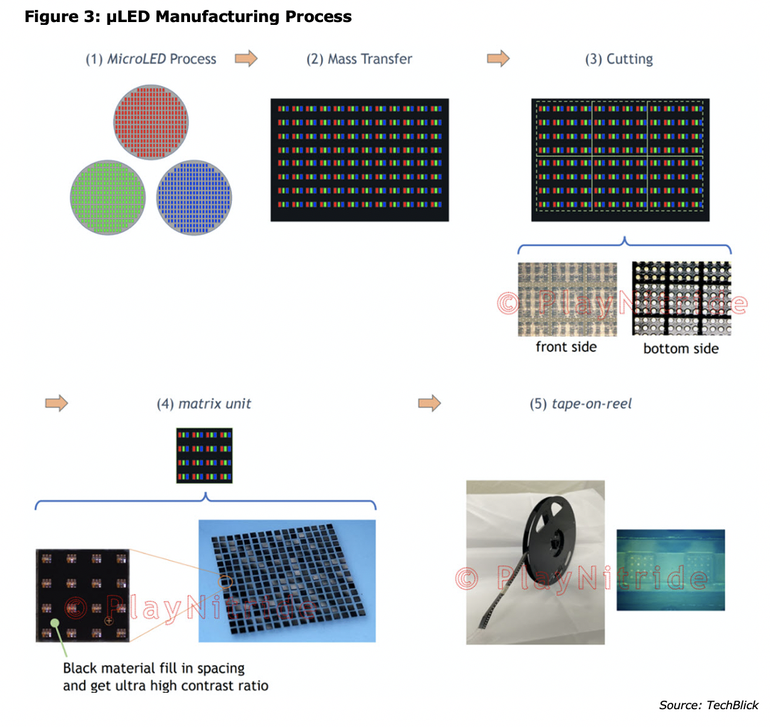 ​These images show the steps needed to create a reel-on-tape approach to making large-area MicroLED displays. This innovation is by PlayNitride.

Waveguides for AR/VR displays
There are many other uses of printing or R2R/R2P in the display industry. Another use case is in R2P (roll-to-plate) nanoimprinting for creating in- and out-coupling features for AV/VR glasses. Such in- or out-couplings can be made on 300mm wafers, but the throughput is low. With R2P nanoimprinting the throughput may be substantially extended. Morphotonics tiles together their nanoimprint stamps to create a Gen 5 R2P nanoimprinting line able to achieve sub-micron features and 480 eyepieces per imprint cycle. The R2P nanoimprint process requires solvent-free resins with high refractive index. Here, for example, zirconia and titania based formulations by Pixelligent can result in resin with a refractive index of 1.857. 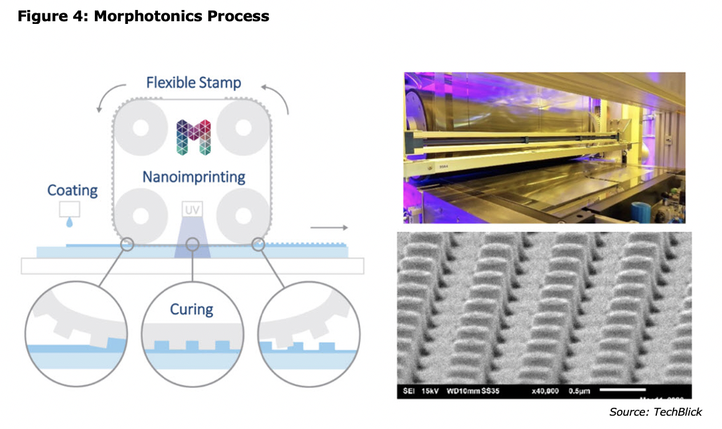 This tiling approach is being tested on a Gen5 R2P nanoimprint tool with integrated UV curing to achieve nano or sub-microfeatures with replication fidelity. The images above are from Morphotonics .  Nanoimprinting is being tested in the development of highly transparent and high conducting metal mesh transparent conductive films. One example is from Meta (Metamaterials) Inc. They have a rolling lithography system; UV light is wrapped within a soft rolled-up mask. The rolling nanolithography is used to create sub-micron exposures on a photoresist coated metal substrate. The photoresist is then etched, creating an extremely high-resolution metal mesh 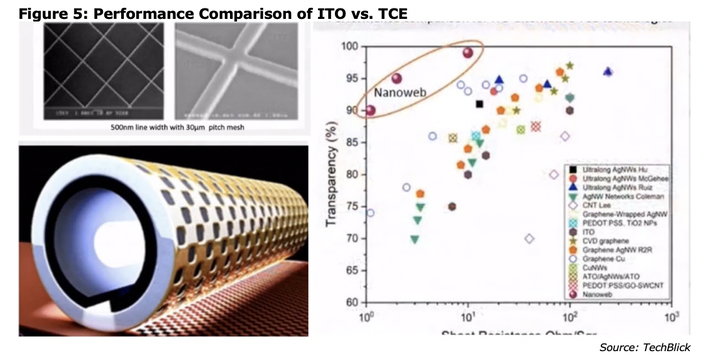 ​The schematic at bottom left shows the idea of a rolling UV nanolithography by Meta (Metamaterials) Inc. The images at top left show an ultra-fine feature metal mesh. The benchmarking charts shows that this process can create ultra-transparent and highly conductive films. Currently the web width is 300mm but could be scaled to 1-1.2m.

Is being tried in simple (i.e., segmented) low-cost high-volume displays R2R printed electrochromic displays used in in smart packaging A leading player here is Ynvisible. The image set on the left below shows snapshots of full R2R line (printer and converting). This level of automated R2R production is a real progress in the field.
The images on the right images show some application examples. 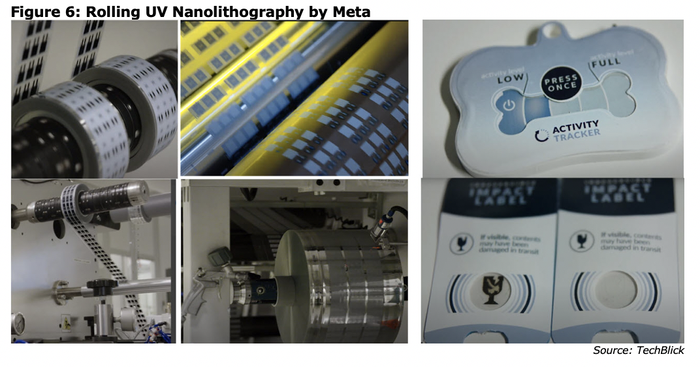