Motorola to Release a Stylus Based Phone
February 02, 2020
​
Motorola will introduce an entirely new phone to the G line: the Moto G Stylus. The phone will be called the Moto G Stylus, as was first revealed by Evan Blass on his Twitter account.  The device will be fairly similar to the upcoming Motorola Moto G8 Power in terms of specifications. The key differences between the Moto G Stylus and the Moto G8 Power are in the rear camera sensors and the stylus on the former. The basic specifications of the Moto G Stylus include its 6.36-inch 2300×1080 single hole-punch OLED display, the Qualcomm Snapdragon 665, 4GB of RAM, at least 64GB of internal storage, a 4000mAh battery with 10W charging, Android 10, and a rear-mounted physical fingerprint scanner. In some regions, the phone will support NFC and/or dual nano-SIM cards.

Source: @gusgio8glz Via: Xataka
​
On the rear of the phone, is a triple rear camera array consisting of a primary 48MP f/1.7 Samsung sensor (pixel binned down to 12MP), a secondary 16MP f/2.2 117° wide-angle “Action Cam” sensor, and a tertiary 2MP f/2.2 macro camera. The “Action Cam” was first introduced on the Motorola One Action, and it allows you to take horizontal wide-angle videos while you’re holding the phone vertically. This is possible because the camera sensor is mounted perpendicularly in relation to the other sensors. On the front, you’ll find a single 25MP f/2.0 camera under the punch-hole. The render that’s shown below, depicts the bottom of the Moto G Stylus. From the render, we can see that there’s a 3.5mm headphone jack, a USB Type-C port, a bottom-firing speaker, and a slot for the stylus to be inserted.

There’s a new app on the device that can be used to do the following:
Motorola will also allow users to keep track of the location of the stylus using the app. The app will record the time and location of the device the last time you removed the stylus from its body. When the stylus hasn’t been reinserted into the device for a period of time, the app can send a notification reminding the user to reinsert the pen. 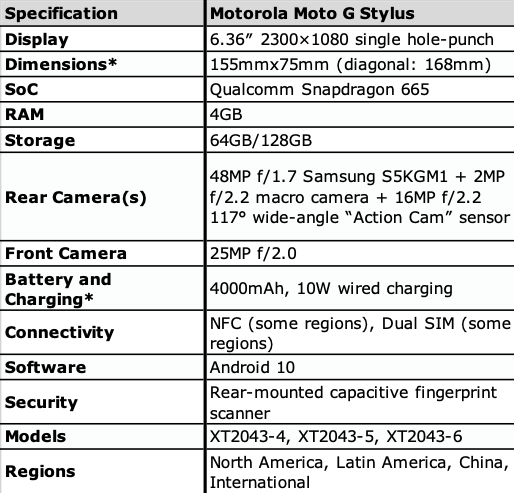