A South Korean survey was spotted that suggested Samsung might launch a 14.6-inch tablet in the near future. 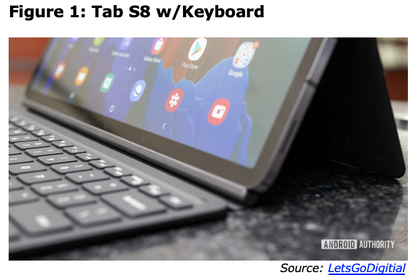 ​Based on a patent filing uncovered by LetsGoDigitial and rendered by Sarang Sheth, here’s a look at the Galaxy Z Fold Tab, a Note-style smartphone with 2 hinges and a nifty ‘crawl-space’ to dock and charge your S-Pen. The Z Fold Tab hopes to form a third device in Samsung’s line-up alongside the Galaxy Z Fold 3 and the Galaxy Z Flip 3, which are set to launch this year – in effect consolidating Samsung’s position in a questionable yet rather interesting foldable-devices market.

​The Z Fold Tab comes with two hinges on its massive screen, creating a novel folding format that has a rather interesting set of pros as well as cons. In its closed mode, the Z Fold Tab can obviously be used as a regular smartphone (albeit being slightly thicker) with a waterfall display on both left and right edges thanks to the folding screens (this obscures the volume and power buttons, but those could easily be translated to the screen via force-touch like in the Vivo Apex 2019). However, unfold the screens on either side and you have yourself a larger tablet. The obvious cons are that instead of one crease running across the screen, you’re now faced with TWO creases, however, given how we consume content and the amount of time we spend looking at centrally aligned elements, this format oddly works, because the two creases sit on the sides of the screen rather than along the center.