Vertical Divider
mmWave: The good and the bad

An OpenSignal report shows across the full spectrum, not just mmWave, 5G availability was more healthy: 5G was available 33.1 percent of the time on T-Mobile, 20.5 percent on AT&T, and 11.2 percent of the time on Verizon. That’s down to T-Mobile focusing on “600 MHz and 2.5 GHz spectrum assets,” says the report. When connected to mmWave, at least, download speeds are ripping.  mmWave 5G average download speeds were 692.9Mbps for Verizon, 232.7Mbps for AT&T, and 215.3Mbps for T-Mobile. When you can get it, it works. mmWave signals are high-frequency radio waves that don’t travel well, and are easily blocked by walls, trees, so their most likely to be useful at events, outdoors, or in malls, and on some roadways. During the cold winter, a phone sitting at home is definitely less likely to get mmWave reception. But in summer, with people outdoors, mmWave connections will happen more, and networks will continue to be rolling out antennas. But what’s been hyped with 5G and mmWave has been way overblown.
Figure 1: Average Connect Time to mmWave in US

Opensignal’s analytics, shows Verizon mmWave 5G users experiencing a higher average time connected to mmWave 5G than users on the other U.S. carriers. In this 90 day period, Verizon users saw a mean time connected to mmWave 5G of 0.8% compared with 0.5% on AT&T and T-Mobile. However, despite Verizon appearing to be ahead this result actually represents a statistical tie because of overlapping confidence intervals with AT&T. Despite this low score, Verizon users have seen their time connected to mmWave 5G increase over the past year. Opensignal’s data shows that Verizon still holds a significant edge in the download speeds we recorded on mmWave 5G compared to its competitors. However, despite seeing some extremely fast download and upload speeds across the mmWave 5G networks in the U.S.

Figure 3: Connect Time to mmWave in US 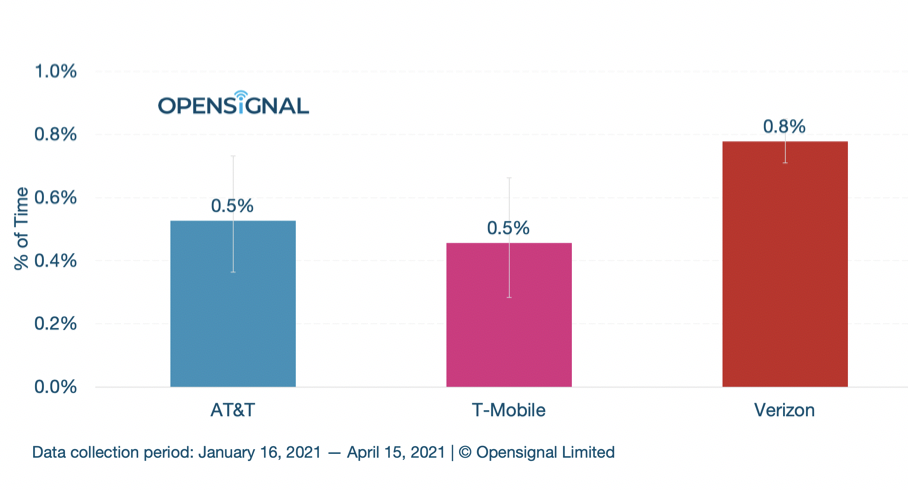