LCDs suffer from the depolarization effects in the TFT transistor substrate, liquid crystal cell, and color filters result in light leakage, such that even when a pixel is turned off, there is a residual amount of light that leaks from the backlight unit (BLU), reducing the  contrast. To increase the contrast, panel makers have adopted various forms of local dimming, where the backlight is segmented into multiple zones, that are controlled individually to adapt to the content in the dimming zone. 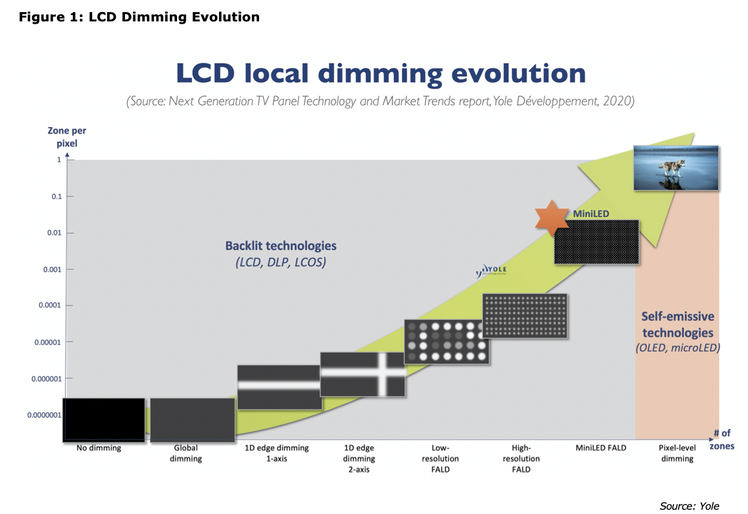 ​Originally local dimming was used in portions of the display especially when the edge light was used. Full Area Local Dimming (FALD) has become popular and involves placing the LEDs strategically on the back of the display facing the viewer, which thickness of the device increases. Using LED backlights, the number of dimming zones are in the 100/panel range depending on the size. The greater the size the zone controls, the less effective is the contrast algorithm. Not only is the LED package itself relatively thick, but a sufficient distance is required for the light from individual chips to spread evenly throughout the display, eliminating hot spots.


With the advent of MiniLED technology, the number of LED chips are increased and designers are balance the number of LEDs, the spacing between each LED and the thickness of the backlight. But the major benefit is increasing the number of zones, which has now reached over 3000. Typically, set makers don’t reveal the number of MiniLEDs or the exact number of zones. The halo effect when bright objects or highlights much smaller than the individual dimming zones are displayed against a very dark background has been reduced but still exist as Apple found out with their new iPad.

Well-designed MiniLED backlights enhance LCD contrast performance over standard LED backlights but still trail OLEDs. Early implementations increase power consumption and have more than doubled switching time from 2-3 ms to 5-6ms, due to the need to control both the LC and the LED. MiniLEDs add cost to the end panel, putting the panel price closer than ever to an OLED.  Some Mini-LED TV sets from Samsung have the same price points as OLED TVs from LGE. TCL TV Mini LED TV sets sell at a discount to the Samsung sets.  Mini LED are trying to reduce costs by lowering the LED size, which makes chip manufacturing more complicated, increases sensitivity to defects, and reduces yields. By reducing the gap between the bonding pads, MiniLED also make attaching the die onto the printed circuit board (PCB) more difficult: higher placement accuracy is required, and the demands on the PCB flatness and lithography accuracy become more stringent.

When compared against OLEDs, MiniLEDs w/FALD are comparable a mix of black and white squares where CR is typically measured.  But MiniLED CR suffers when a dimming area has a mix of colors and gray scales, causing the algorithms to calculate a average color and intensity for the area, which throws off the CDR and the color representation. However, without a standard to measure against (e.g., an OLED TV), the consumer is unlikely to notice the difference.

System Plus consulting’s iPad Pro MiniLED backlight unit teardown reveals that the device uses 10,384 MiniLED chips assembled directly on a PCB to form 2,596 zones. The MiniLED chips (manufactured by Epistar) were judged to be not as small (although the size wasn’t revealed) as expected, leading to a relatively high per chip cost. In addition, the die presents some features such as DBR dielectric mirrors that are more often found on higher-end, larger chips used for general lighting or automotive applications. 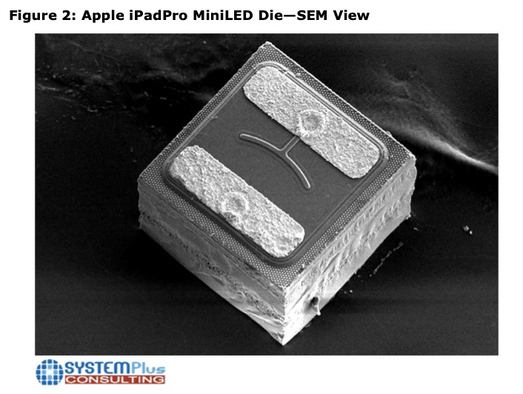 ​Apple drives the full backlight with a small number of custom drivers provided by ST Microelectronics with a good balance between cost and performance by optimizing the number of channels and each driver’s multiplexing capabilities. The tear-down analysis reveals many other unique design choices.