Vertical Divider
Mini-LED Snapshot
​
The LED production and packaging markets are broad and quite competitive, particularly as the Chinese government targeted that industry as one the country should dominate and provided almost unlimited financing to those in China who wished to enter the market a few years back.  That said, because of the many LED applications, producers and packagers have a tendency to work within a small number of those applications, much of which depends on their production expertise.  LED lighting, which at times was considered to be the potential savior of the LED industry, continues to grow, but the relatively high cost of bulbs, compared to incandescent lighting, is still a bit of a stumbling block, despite worldwide mandates. LED backlights are another sub-set of the LED world, as they are necessary for all LCD displays, and has developed from what was initially a small number of LEDs placed around the edges of displays to dimming backlight systems on large TVs that can have hundreds of LEDs.  We have spoken about mini-LED backlights many times, which are small LEDs assembled in a frame that are individually controllable.  Such backlights allow LCD displays to increase contrast in order to compete with OLED and potentially other display modalities.  While such devices are an evolutionary product, meaning they are similar to previous LED backlights in how they operate, they are smaller and have more complex driving systems that make them more difficult to produce and therefore more expensive.
​
Mini-LED backlights are in limited production currently and a few devices have been released using same, but 2021 is expected to be the year in which mini-LED backlighting becomes a real product and shows up in multiple device types.  Again, there are those that expect mini-LED backlight to ‘save’ the LED industry, but enthusiastic expectations tend to be overstated, especially in the early years of a product, and we keep our expectations relatively low for next year, more important are the expectations for LED producers, many of whom are gearing up to produce mini-LED BLUs.  In most cases what are being produced are samples that are provided to display manufacturers or module assemblers to encourage their use in 2021 display models, particularly Apple who is expected to be pushing the technology up through its product line over the next few years.

While Apple has established relationships with Taiwan based suppliers, there are few major (and minor) LED players that are not looking to gain entrance into that coveted supply chain, and we get a glimpse of one Taiwanese packager, Harvatek that has stated that they expect to generate ~5% of their sales in 2021 from mini-LED  backlighting.  The company has shipped small volumes of mini-LED BLUs for gaming monitors and smartphones and expects to see strong demand from gaming and mid-size notebooks next year, however due to intense competition already seen in China, Harvatek will concentrate on regions outside of the Mainland.  The company has the capacity to package 1.8b LED chips/year and 500m mini-LED chips, and while that sounds like a lot of mini-LED capacity, units can range from a few hundred LEDs to a few thousand LEDs depending on the application, which puts some perspective on the number of units that can be produced. One overriding question will be the cost of manufacturing such assemblies and the margins associated.  While many LED packagers have focused on fine-pitch (small distance between LEDs) display backlighting, the market has not developed as quickly as some had hoped, and Harvatek is considering shifting some fine-pitch LED production to IR LEDs that are used in imaging and surveillance, which carry a higher margin.  While this will not change the company’s mini-LED production, it does give rise to the sensitivity that LED manufacturers and packagers have to relatively short-term trends and how quickly they have to adapt production goals to capture profitability.  As Harvatek has already decided that competition in China is so great that it does not see a profitable model for mini-LEDs on the Mainland, it’s a good indication as to why we take a relatively conservative stance on how the mini-LED backlight market will develop in 2021. 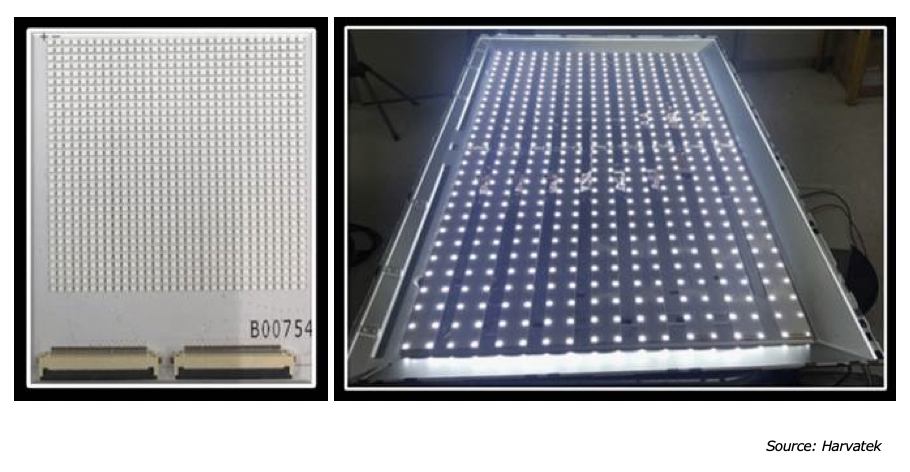