For a generation, Microsoft (together with Apple) set the standard for application design on PCs and while it missed the smartphone revolution ( as Bill Gates admits, his “… not doing an Android was his worst mistake”) the company is being dragged into app design with its upcoming release of the Surface Neo and Duo. Consumers want bigger displays in smaller form factors and whether they prefer seamless foldable or dual displays will be determined by the market.  But Microsoft has begun to apply its software intellect to the problem, which should help the arriviste foldables market in detailing exactly how apps will run on dual-screen devices (or foldable) like the Surface Duo and Surface Neo. The company unveiled both devices back in October, with the smaller Surface Duo running Android and the larger Surface Neo powered by Windows 10X. Now, Microsoft is getting developers ready to test their apps to see how both devices will span them across both displays, which is more inclusive then the process used by Google when it rushed Android’s foldable support for Samsung’s Fold. By default, an app will occupy a single screen according to Microsoft. Surface Duo or Surface Neo users can then span the app across both displays when they’re in double-portrait or double-landscape layout. Microsoft envisions that app developers will experiment with different ways to utilize both screens. Some of these include simply using both screens as an extended canvas, having two pages of a document shown at once, using the second display as a companion or dual view of something, or having a master part of the app on one display and details on the second.

Source: Microsoft
​
These are “initial app pattern ideas,” according to Microsoft, and the company could well extend them based on developer feedback in the coming months. Microsoft is also asking developers to consider a variety of inputs and to embrace the way orientations these new dual-screen devices will be used in. On the input side of things, Microsoft wants developers to optimize apps that are built for things like note taking to work best in landscape mode. “Our studies show that users are more comfortable typing or writing on a flat surface,” says a lengthy Microsoft dual-screen document. These variety of inputs include stylus, pen, and touch, just like many Windows 10 devices today. While Windows 10 already natively supports touch, Microsoft wants dual-screen app developers to embrace drag and drop. Because apps open full screen on one display by default, it can also window them to have two running side-by-side on each display. “A dual-screen device that runs apps side-by-side especially lends itself to drag-and-drop interactions for a great app experience,” explains Microsoft. If developers enable multiple instances for their apps, you’ll also be able to open multiple instances of the same app and run them side-by-side.

Figure 2: Side-by-side in the Neo, Duo or Perhaps the Foldable

​Source: Microsoft
Microsoft appears to be readying developers largely for dual-screen devices, and not single foldable displays. These multiple displays do introduce an obvious seam in the middle, and Microsoft is providing some guidance on embracing that gap or avoiding it. Apps like Google Maps can embrace the seam easily because map data can be moved freely, but some apps will have dialog boxes that were designed to be centered, or images that are displayed in the center. Microsoft is recommending that app-launched dialogs should move to one screen instead of trying to stretching across both. That’s the same for context menus or drop down menus, that should ideally treat the gap between the displays as a boundary and not try to display menus there.  Developers will also need to consider snapping to the seam, to avoid content in a grid or tabular layout not being displayed correctly. Responsive layouts will help here, by rearrange content when the screen orientation or size changes. Developers can also choose how to handle images spanning across the two displays. They can either mask, where an image is rendered behind the seam, or split which cuts the image apart. The mask technique leaves it up to a users’ brain to “naturally connect the ‘unseen’ parts,” according to Microsoft, and it’s a recommended technique for videos and photos.

Figure 3: Split Mask Images for Duo, but not for Foldable

Source: Microsoft
Microsoft is also releasing an Android emulator for the Surface Duo to allow developers to test mobile apps. A Windows 10X emulator for the Surface Neo will arrive next month at around the same time that Microsoft plans to detail more of its dual-screen plans during a developer webcast. Microsoft’s Android emulator will naturally support Android apps, and the Windows 10X version will include support for native Windows APIs to let developers detect hinge positions and optimize their win32 or Universal Windows Platform (UWP) apps for these new devices. Microsoft is also proposing new web standards for dual-screen layouts, and is “actively incubating new capabilities that enable web content to provide a great experience on dual-screen devices.” 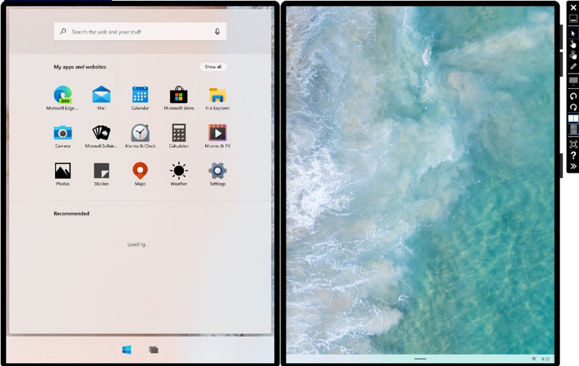