Vertical Divider
Microsoft Scores $21.88B HoloLens Order from the US Army

Microsoft received an order for over 120,000 HoloLens AR headsets from the U.S. Army under a new contract that could be worth up to $21.88B over a decade. The standard-issue HoloLens, which costs $3,500, overlays holograms on real world images and supports interaction using hand and voice gestures. What does the remaining $21.472B buy? 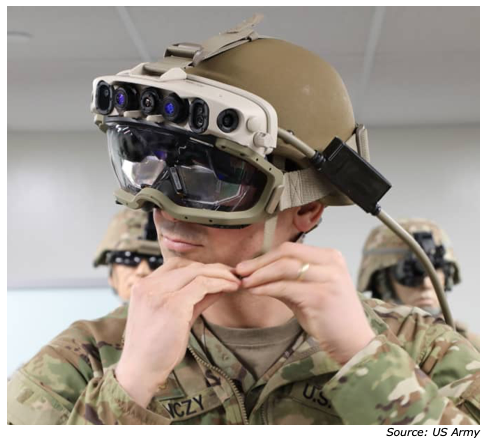 “The IVAS headset, based on HoloLens and augmented by Microsoft Azure cloud services, delivers a platform that will keep soldiers safer and make them more effective,” Alex Kipman, a technical fellow at Microsoft and the person who introduced the HoloLens in 2015, wrote in a blog post. “The program delivers enhanced situational awareness, enabling information sharing and decision-making in a variety of scenarios.” The headset enables soldiers, fight, rehearse and train in one system, the Army said in a statement.  The deal makes Microsoft a more prominent technology supplier to the U.S. military.

Some Microsoft employees asked the company to hold off on submitting for a prior cloud contract, and similarly, a group of employees called on Microsoft to cancel the HoloLens contract. “We did not sign up to develop weapons, and we demand a say in how our work is used,” the employees wrote in an open letter regarding the HoloLens contract. Days later, Microsoft CEO Satya Nadella defended the Army augmented-reality project, saying that “we made a principled decision that we’re not going to withhold technology from institutions that we have elected in democracies to protect the freedoms we enjoy.” The Army, meanwhile, has suggested the augmented-reality technology could help soldiers target enemies and prevent the killing of civilians. In 2018, Microsoft signed a $480M agreement with the Army to supply prototypes of its Integrated Vision Augmented System. The new deal covers custom production versions. Last summer, the U.S. Senate Armed Services Committee proposed freezing half of the Army's budget for the HoloLens program.

Shipments of augmented reality and virtual reality (AR/VR) headsets are expected to jump 54% to 8.9 million units worldwide this year. The annual growth rate will accelerate to 67% over the next four years with shipments reaching 68.6 million in 2023, per a forecast from International Data Corp. (IDC).