Microsoft recently released the  HoloLens 2, that incorporates tiny mirrors vibrating 12,000 times per second, generating holograms twice as wide as before. The device’s body uses carbon fiber, which is half as the weight of aluminum and far more rigid. It also helps stabilize the delicate electronics in the headset, including dozens of sensors that track exactly where the head is turning or where the arms are. “And I’m talking like micron precision, right?” inventor Kipman says. “Nanometer precision.” Kipman’s ultimate goal is to Replace every screen, from smartphone to tablet to monitor to TVs, with the HoloLens or one of the next versions of it. “Why would I have my computer if I have infinite monitors in front of me?” he says. “Why would I have a phone or a TV?”

A self-contained, untethered visual headpiece that projects holographic-type images to the user, creating what MSFT calls mixed reality rather than augmented reality. With the visor up, normal vision resumes. The device can be worn over eyeglasses. The back of the device contains the two semiconductors, a CPU made by Qualcomm (QCOM) and a MSFT-designed "holographic processing unit" ("HPU 2.0") coprocessor that has AI capabilities. The front of the device contains those tiny mirrors that help create the images. Several other aspects of the system, of course, exist. Here is a picture showing what a HL2 user is seeing, using a special camera. The virtual chair and the virtual cube it is in would otherwise be invisible to the casual observer. 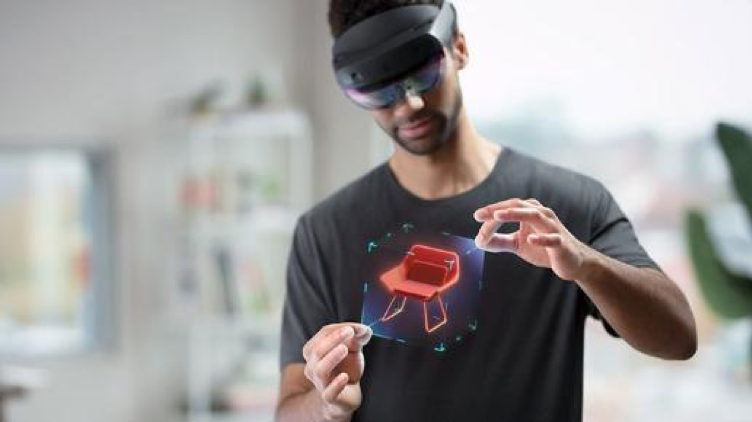 Source: Company
​The company  claims the HoloLens 2 offers the most comfortable and immersive mixed reality experience available—enhanced by the reliability, security, and scalability of cloud and AI services from Microsoft.

This price point of $3,500 is far above that of Google Glass and the range for a high-end Oculus VR headset, but is in the ballpark for Magic Leap One ($2295), which is not, self-contained. The first time people don the new HoloLens 2 on their heads, the device automatically gets to know them: It measures everything from the precise shape of their hands to the exact distance between their eyes. The artificial intelligence “was astonishingly complicated” but essential to making the experience of using the device “instinctual,” said Jamie Shotton, a partner scientist who leads the HoloLens science team in Cambridge, United Kingdom. “We want you to know how to use HoloLens without having to be taught how to use it,” he said...HL2 only connects to the Internet via Wi-Fi or Bluetooth. Cellular capability is expected in future versions. Smithsonian summarized Kipman's vision for users this way:
He imagines an airplane mechanic in Japan using the HoloLens to summon a Rolls Royce engineer to help diagnose a busted engine, or a surgeon having hands-free, holographic access to a patient’s X-rays and medical history in the operating room.
A recent article shows Qantas preparing to embark on the next phase of its trial using Microsoft’s HoloLens 2 mixed reality headset and technology to help train its engineers without putting them in harm’s way. The proof of concept uses the HoloLens mixed reality technology to build a digital twin of a Boeing 737 flight deck, with the learner sitting in either the captain’s or first officer’s virtual chair to run through procedures and checklists. “The key purpose is to allow learners to undertake an engine ground run in a safe, simulated environment – demonstrating responses to high risk events.” group learning technology manager for Qantas Amanda El Bahou said.

Kipman projects the HLX will be as compact as a normal pair of horn-rimmed glasses and its sheer ubiquity in the workplace will make it seem acceptable in social life. “You wear them all day,” he says. His vision to replace screened devices with HL working with Azure and other MSFT software goes beyond the obvious commercial and then consumer use cases where holograms are everywhere.

HL2 is more comfortable, has a wider field of vision, and is easier to use than HL1. MSFT has a guiding vision for a HL ecosystem that would rely upon Azure and certain MSFT software services. MSFT hopes its comprehensive vision for HL will parallel the revelations of Apple, Amazon, Facebook and Google over the past 10-20 years.