Vertical Divider
Microsoft Duo w/Specs, Including OLED Display but No Release Date
May 24, 2020

​Microsoft’s dual-screen Android phone was announced back in October of 2019, yet very little is still known about the Surface Duo other that it continues to be delayed. Microsoft did report that the Surface Duo would have two 5.6-inch OLED displays with a resolution of 1800×1350 each at 4.8mm thick and 401 PPI. Windows Central is reporting that the specifications have been final for a while now and people are testing prototypes in the wild.  New reports indicate that the Surface Duo is packing the Qualcomm Snapdragon 855 and 6GB of RAM. The inclusion of the Snapdragon 855 instead of the 865 is not super surprising, Microsoft finalized the internal design well before Qualcomm’s requirement of a separate 5G chip with the 865 was known. There simply isn’t room for the extra chip and it’s too late to make such significant changes. The Surface Duo’s storage options will be 64GB and 256GB (no 128GB). The lone camera sensor will be 11MP f/2.0 1.12um, it will have USB-C fast charging, and a 3,460mAh battery, which is relatively small for a device wielding two displays.

The Surface Duo will ship with Android 10, but should be updated to Android 11 “relatively quickly.” Microsoft is aiming to finalize the preinstalled apps by early June. All of the first-party Microsoft apps will support spanning both displays and drag and drop capabilities at launch. Current test units apparently don’t have wireless charging or NFC. Wireless charging is a borderline omission, but the lack of NFC is significant as the Surface Duo couldn’t be used for mobile payments. At this point, the biggest unknowns left are the price and release date. 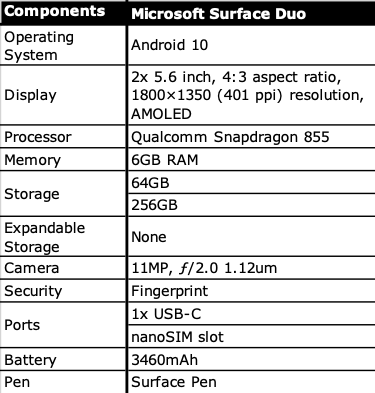