Vertical Divider
​Musing in Shanghai at the International OLED Summit

Yole presented their overview of the status on Micro LEDs for displays. They rely on patents filed as a measure of progress and the number of patents continue to increase.
Figure 1: Micro LEDs Progress 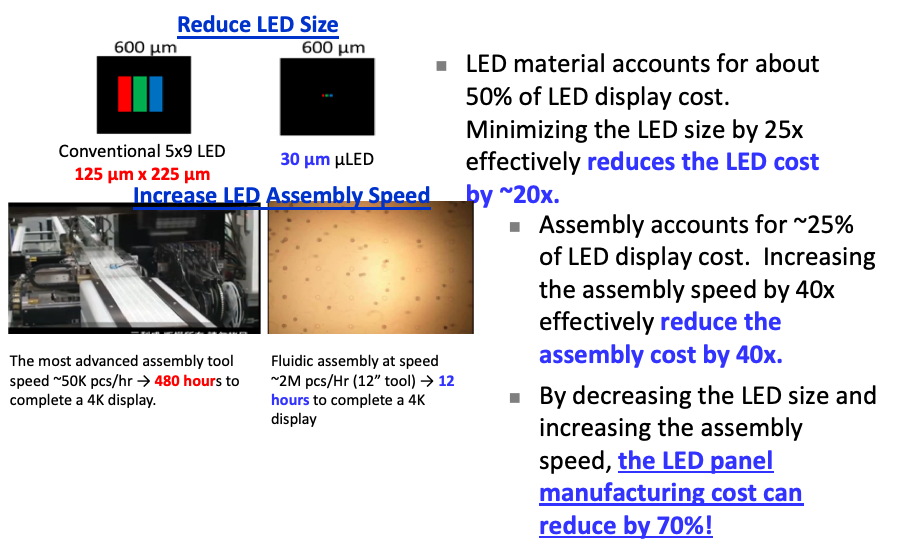 Source: eLux
​
Critical to the performance of a display is the quantum efficiency of the emitting material. Blue LEDs are used for LCD backlights because the EQE of a >100um LED is in the range of 75%, which compares quite favorably to the best OLEDs at ~7%. However, difference in blue EQE efficiency drops from ~68%, when the LED is >100um to 18% for a 5um LED, still a significant difference.  However, for red and green. OLEDs have higher quantum efficiencies that Micro LEDs at ~10um or less. The 10um size is usually used as the break point for Micro LEDs to become competitive in TVs. The likely solution for Micro LED TVs is to use blue LEDs and convert blue to red and green with a QD color filter, similar to what Samsung is doing in their QD OLED development. 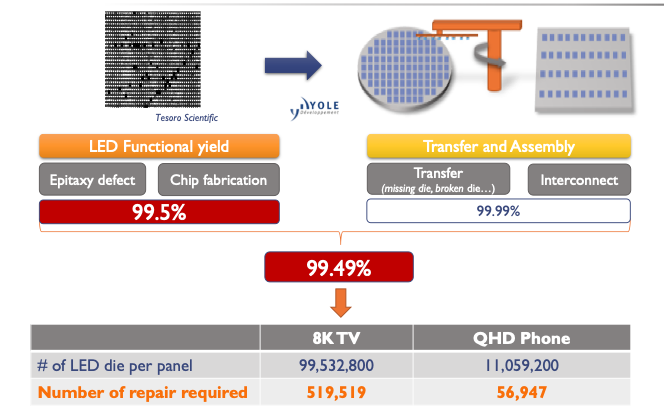 Source: Yole
Yole had no answer as to how the yield could be increased concurrently with the size of the die dropping from today’s ~500 to 1,000um to ~10um. Typically, yields decreases with the size of the die.  One solution offered was to use higher level clean rooms to reduce the # of particles. Other solutions offered by Yole are shown in the next chart. 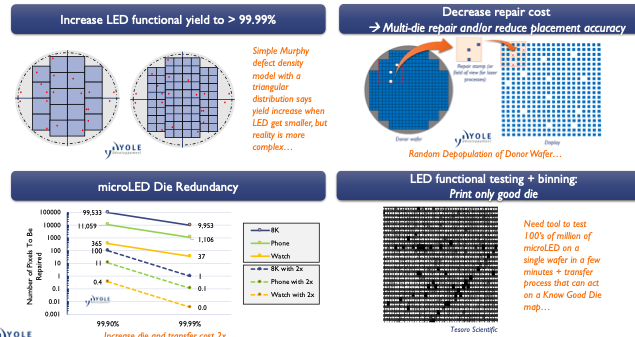 J.J. Lee, President and CEO of eLux presented their self-aligned fluidic assembly technology that he claims will solve the transport problem. The process, which is similar the one used by the failed Alien, Inc. for RFID chips, puts the LED die into a solution and then pours the solution onto the substrate per-patterned with wells, where the die are deposited on the display substrate. The dies are designed with a single post allowing the substrate to capture µLEDs at precise positions. An oscillating flow yields many capture attempts and excess µLED disks are recycled.

Source: eLux
Lee claims the process has a yield of 99.5% and can deposition 25m LEDs in 15minutes, compared to the current Pick and Place process that takes hours.