The prototype of Micro LED technology is Sony’s Crystal LED display presented in 2012. 6.22 million Micro LEDs were used to build the 55-inch display to show an ultra-high resolution. However, the display was created by embedding one single LED after another, which is extremely time consuming and expensive, addressing the manufacture challenges of Micro LED displays.

Taiwan’s LED chip maker Epistar proposed the idea of Mini LED, which also reduce the size of LED but keep the sapphire substrate. In this way, the LED chips can still be manufactured with current equipment. The cost and difficulties of producing Mini LED are thus lower, making the technology easier to enter the commercial market. Back in 2018, LEDinside defined that Mini LEDs are above the size of 100 μm while Micro LEDs are under. But as the technology continues to improve, some companies are able to make Mini LED chips with sapphire substrate that are below 100 μm. As a result, LEDinside redefine that Micro LEDs have to be below 75 μm and without sapphire substrate. And Mini LEDs are between 75 to 300 μm with sapphire substrate. Mini LED are considered a transitional phase of display technology on the way moving toward Micro LED, Mini LED has actually positioned in the market as the technology becomes more mature for applications of display backlight sources and RGB fine-pitch displays. As for backlight applications, Mini LED backlight display enables full array local dimming, realizing a low definition grey-scale-like backlight panel to intensify contrast and resolution of display. Furthermore, the keep shrinking Mini LED chips allow increased dimming zone to enhance display performance. Another Mini LED application is RGB fine-pitch displays which deploy small size Mini LED packages to create display video walls with pitch size less than 1.0 mm, setting up a new mainstream specification for signage. 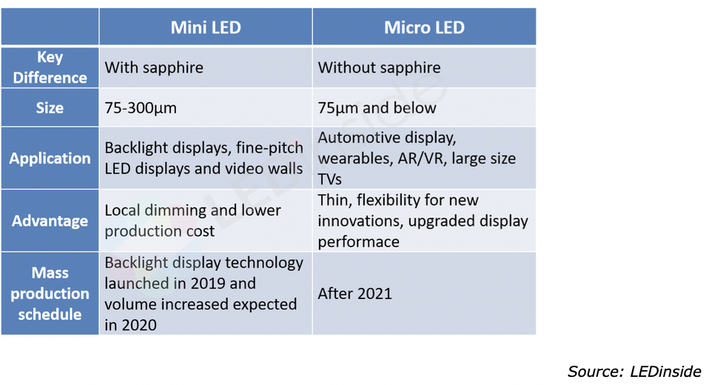 Micro LEDs are lighter, thinner, and could be integrated with different materials. And applications include AR/VR devices, automotive applications and wearables. Samsung’s >100um micro-LEDs are reportedly suffering from low yields slowing the release of a consumer product. The mass transfer of the LEDs from the sapphire wafer to the display substrate at high speed with low defect rates remains an issue and is resulting in costs that are too high for the consumer market.  Samsung has demonstrated micro-LED TVs ranging from 75” to 110” for residential use and commercial product up to 292”, but the cost of producing at low yields makes them impractical for residential products. Given that the processes for transferring, testing, and repairing micro-LEDs is still in the development stage, Samsung has not yet experienced all the problems associated with MP and while they boasted about releasing a consumer product this year, they are not close to a release date according to supplier production timelines. From: SCMR, LLC
Figure 2 : Samsung's Wall Process Steps

​LEDinside has created the following table to summarize the latest technological advancements made by Micro LED developers around the world. 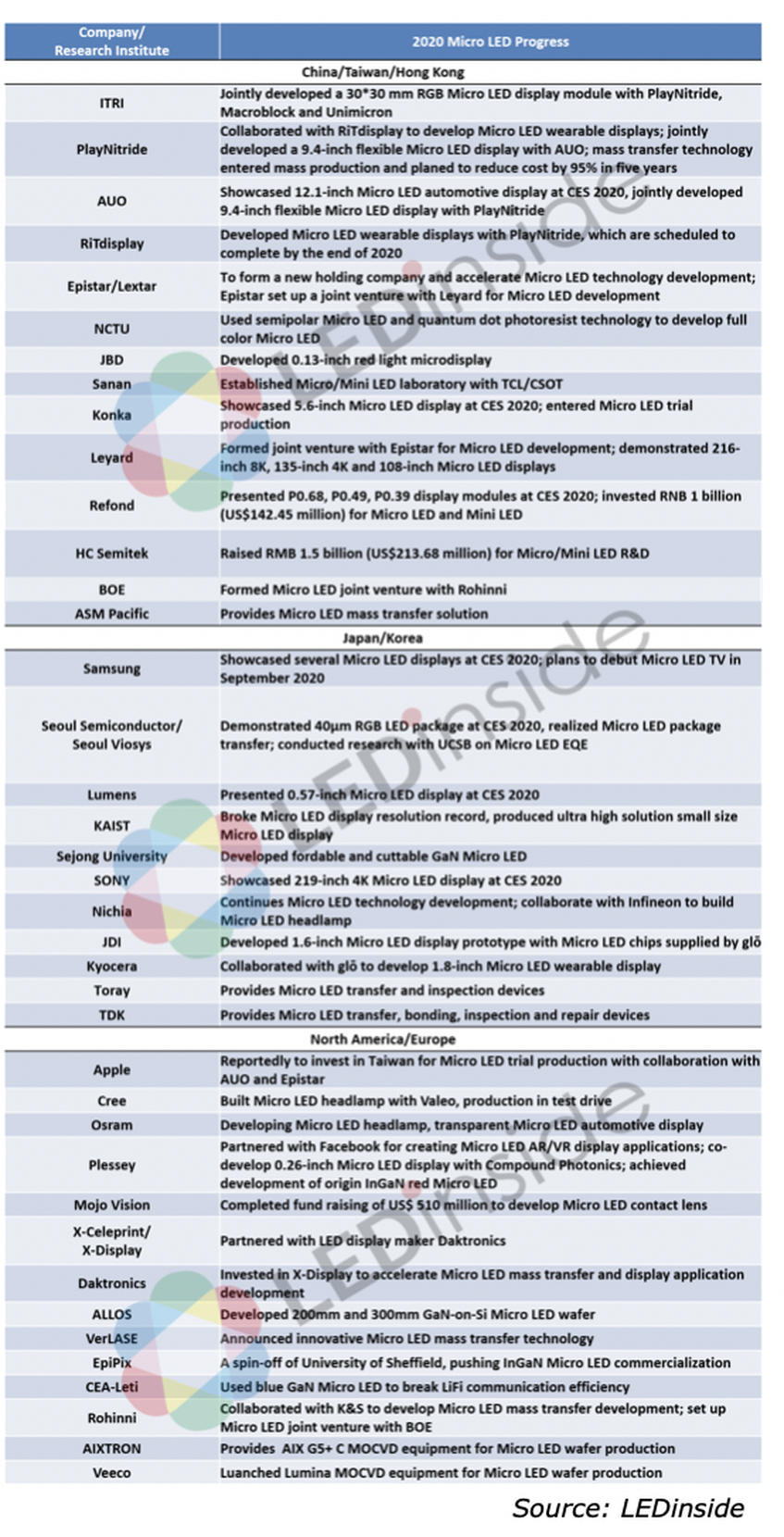