LEDs, whether standard size >100µm, mini 25-100µm or micro 1µm to 25µm, are grown in monochrome structures, either all red, green or blue. Since blue LEDs have 25% higher EQE than red and 50% higher EQE than green, most energy dependent applications, e.g. lighting, backlights and µLED micro displays use blue with some form of color conversion. Down conversion results in a loss of light output, for example, color filters reduce luminance by ~67%, quantum dots have 90% absorption and both approaches add costs. The LED industry expects the efficiency of red and green to eventually reach blue performance. But even in the most optimistic forecast, the difference won’t be resolved until 2040 or 2050. 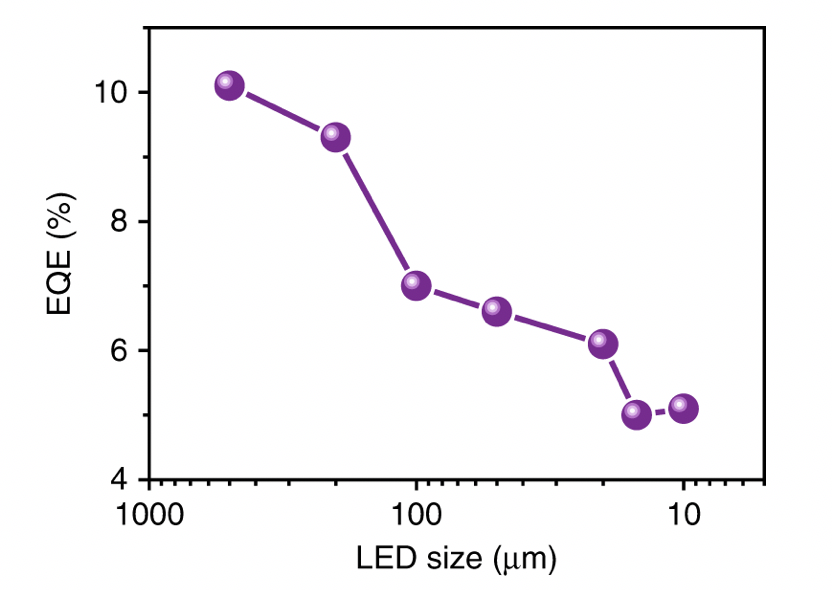 Source: Nature (“Micro LEDs” w/QD in Display Technology)
​
​Given the opportunity to disrupt the $100b+ display industry, micro LEDs manufacturers are seeking every opportunity to reduce the costs of transferring µLED from a sapphire or silicon carbonate substrate to a glass or plastic substrate for use in a display. Jade Bird Display recently announced a state of the art, 0.3” monochrome Micro LED panel on glass with red, green or blue monochrome uLEDs.

To increase the efficiency of red and green to blue µLEDs, researchers are looking to reducing the size of the emitters to nano levels and using Ga N for all red as well as blue and green. We described such an effort by NS nanotech, previously in Display Daily.

Display Daily also featured a report on Aledia, which according to the author is accelerating µLED execution.  Aledia is a French start-up, in the process of raising $140m of which, $80m is committed according to President, CEO and cofounder, Giorgio Anania to accelerate the development of its nanowire on silicon microLED technology. Previous investments[1] included a Series B and C rounds for a total of $77m. Most LED makers grow GaN on a sapphire substrate, (although SiC is also used) as it exhibits good efficiency and is long lasting but has size limitations because of its crystalline nature. Red is based on AlInGaP , which is highly temperature dependent- small changes in temperature lead to large changes in color, efficiency and reliability, so relatively low operating temperatures are used.  InGaN has lower dependences and can operate at higher operating temperature.  In an RGB configuration with two different materials sets trying to co-exist, the system must operate at the "wrong" temperature for one of the materials or somehow create two thermal planes to support each material. In addition green has proven to have low efficiency when grown using GaN and exhibits the well-known green gap.

Aledia intends to grow single crystalline GaN nanowires on a Si substrate with uniform growth orientation, which helps the nanowires produce highly efficient optoelectronic devices. A similar approach can be used to grow other compound semiconductor nanowires.  They expect to extend the upper size limit of the GaN growth area to produce red  green and blue light from GaN nanowire-based bright LEDs grown on fused silica based on enhancing the electron current channel, which is the wetting layer. By keeping the base structure at the nano level, GaN can produce any color without sacrificing LED performance.
Aledia is using MOCVD equipment from Veeco and has a target date of 2023 for mass production. Nanowires enable the production of nm LED emitters and multiple emitters are used to produce a sub-pixel of ~1um, The next chart is a cartoon representation of the differences, between the use of NW µLEDs and using blue µLEDs with color converters. 2D Micro LEDs use blue LEDs with a phosphor to convert the light to white and then a color filter to create red, green and blue sub-pixels. Alternative QD color converters could be used to convert blue to red and green, but a color filter might still be needed.


Aledia wants to use NW RGB LEDs to compete with OLED based displays for TVs and smartphones and virtually every other type of display application now using LCDs.  Aside from the growth of NW LED emitters, Aledia is working on a novel transport mechanism that will transport the NW µLEDs from the Si substrate to a glass or plastic substrate to make direct view displays.  While Aledia provides very little technical info about its NW technology, they have provided absolutely nothing about the transport technology.

The key elements of the NW technology include:

​The next figure shows the many approaches that have been proposed for mass transport, but only the simple pick and place has been used commercially. 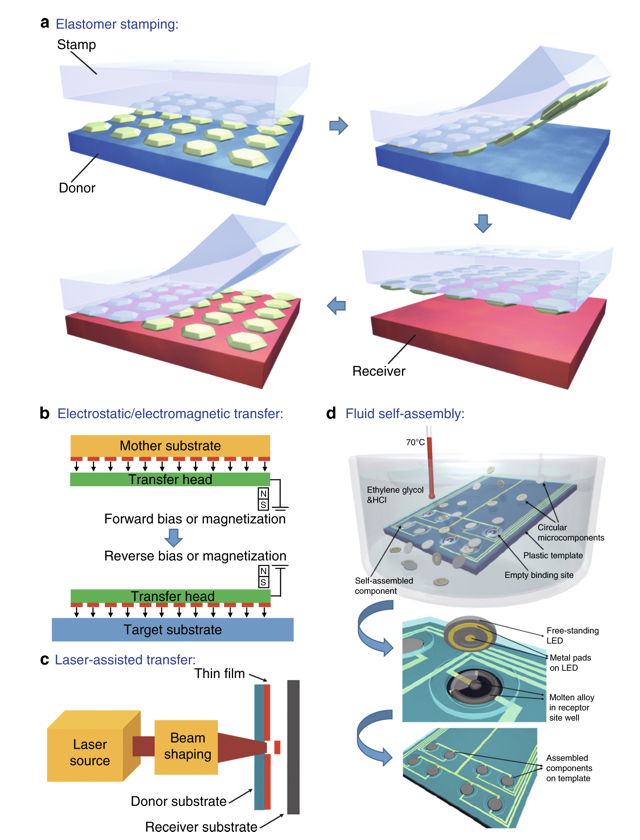 The following table shows the spec of the recently announced Jade Bird Display 0.3” 640 x 480. What these new displays indicate is that µLEDs can be designed to 1.7 µm.  This table is used to determine the size and pitch of the pixels f and to calculate the area needed for a 4K and 8K resolution.  Columns 1, 2, 3 are from Jade Bird, which use a 0.3” diagonal and has a 640x480 resolution. Column 4 shows the specs if the panel were full color.  Columns 5 and 6 shows the number of pixels and area for 4K and 8K, respectively.

To determine the cost of the µLEDs, we use the area of the 4K and 8K µLEDs, divided into the 300mm available area and the multiple by the finished wafer cost, which results in $0.81 per 4K device and $3.26 for an 8K device.

Source: Source: Jade Display, OLED-A
​
The next table shows the cost elements of a 65” 8K OLED TV panel as built in 2021. Costs are then projected thru 2025. In addition, the cost breakdowns for OLED IJP and QLED (LCD) TVs are shown.  There are many solutions for transporting µLEDs between LED wafers and displays wafers, but there are no commercial high volume solutions. Further Aledia will not disclose their technology, performance or costs. As a result, we chose to calculate the capex available for the task.  In the case of OLEDs its was $4.4b, for IJP, $3.1b and QLEDs, $2.2b. Clearly this level of capex is large enough to suggest the task is possible.

For OLED based smartphones, the results are quite difference. The µLEDs are close to the OLED costs such that here is only $66m in capex for transport, making it unlikely that a cost effect solution will be developed. 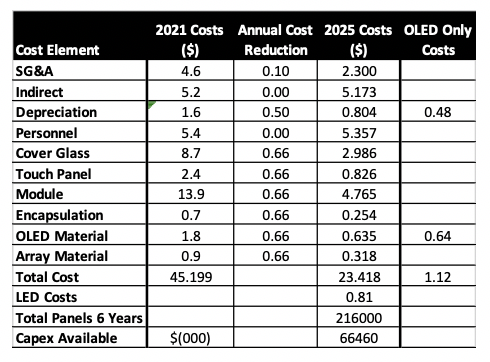 ​Source: OLED-A, DSCC
Aledia’s solution should be competitive with both OLED and QLED TVs, which could be a 50m panel market in 2025. However, Micro Displays can also be made using blue µLEDs and a color converter. Using a color filter, the efficiency would drop by 2/3rds, such that the spec’d 68m cd/m2 would drop to ~32m cd/m2 and at least 1 extra µLED per pixel would be required for redundancy, increasing the cost by ~$1,00 for 8K. Since the luminance requirements for TVs in 2025 are likely to be 2000 cd/m2 with peak levels at 10,000 cd/m2 for 1 mm2 areas to support HDR, it would be well within the capability of blue µLEDs w/color filter, such that any feasible transport system would apply.

In the TV application µLED’s high luminance and longer lifetime are saleable differentiators against OLEDs.  The higher wall efficiency is also, but unless the government makes it an issue, it’s not relevant. As to color, OLEDs have always been able to meet whatever spec is relevant. µLED’s faster response time is unlikely to make a difference for TV watching but could influence gamers.

Aledia’s investors are being asked for risk capital to provide a solution that may not be the required order of magnitude improvement over what already exists. Investors will also have to at least double or triple their investment or get diluted to get to mass production. Moreover, by 2025, the industry will be 6 years into what is likely to be a 9-year life cycle for 8K (similar to HD and 4K) and another 4X increase in resolution could substantially reduce the cost benefits of µLEDs over OLEDs.

On the positive side, Aledia’s approach would make a big difference in the power consumption of micro displays for AR, where high luminance > 50K cd/m2 and power consumption of less than10 mw. Would be highly desirable.  But the market is immature and Anania doesn’t believe it could justify the required investment. A more compelling approach would be to build the NW on a silicon substrate that already contains the TFTs and capacitors to drive the NW LEDs.  Then the transport system could transport the pixels and, TFTs and capacitors in unison, eliminating the active matrix capex. ​