JBD makes monolithic hybrid integrated microLED based micro displays by bonding the LED Epi wafer and silicon IC backplane at the wafer level. They use a hybrid (III-V bonded to Si) monolithic integration process by growing GaN blue and green LEDs on sapphire, red LEDs on GaAs. They  believe monolithic hybrid integration is the only viable solution for high pixel density applications with pixel pitch less than 5 micrometers. They don’t see mass transfer as a viable option for high pixel densities in micro displays.

​JBD is heavy into IP with  111 patents pending and granted covering micro display structures, IC backplane, pixel level optics, full color displays and EQE improvements and 30-40 applications to be added this year. Their current product available for sampling is a 0.31” 5000 DPI green monochrome microLED panel. A 0.13” microdisplay product will be launched in Q4 with VGA resolution and a pixel pitch of 4 microns. Current yields at the wafer-level are believed to be adequate for price insensitive applications. They forecast yields will reach  >80% chips per wafer. Production capacity for the 0.13” display is 250K panels/month, which will double by the end of 2021 and reach 2M panels/month by 2023. 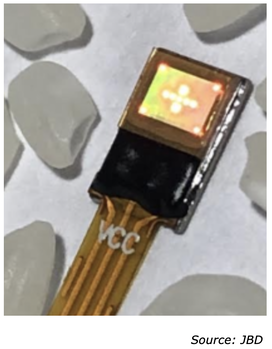 They hope to reduce the pixel pitch to 1um or lower. Their current wall plug efficiency (WPE) is 10% for blue, 10% for green and  ~1% for red. In an AR application, the light is projected within a ± 20 degree cone, which is usually 25% of the WPE. They are in the process of improving efficiencies as they are far from reaching the theoretical limit of efficiencies and the sidewall issue dominates. 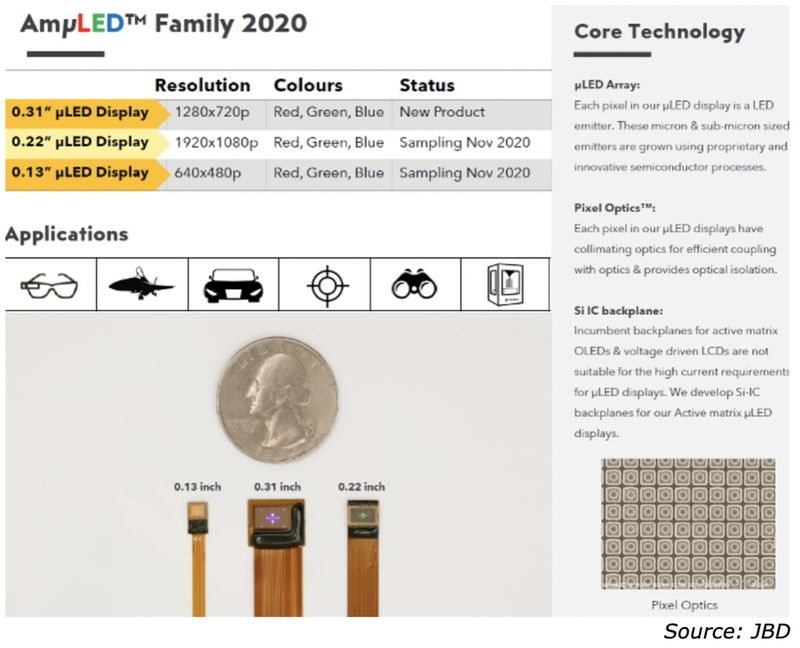 Beyond AR, JBD’s targeted applications include  HMDs, ranges finders and other sports optics. They expect to reach volume production in 2022/2023. To get an RGB display, they must use a color filter or QD color converter. True RGB microdisplay is challenging and they don’t seem to have a specific timeframe, but expect to have a product (using some form of color conversion) with decent wall plug efficiency in 2023.

This article is based on the contents of an interview between DSCC and JBD.
​