Xiaomi joined Samsung and Huawei in the flexible phone market, and while it isn’t the mysterious tri-fold device that Xiaomi teased awhile back, but the company’s new Mi Mix Fold is here. Priced at 9,999 yuan (around $1,520), the Mi Mix Fold is significantly cheaper than both Samsung’s $2,000 Galaxy Z Fold 2 ($2499) and Huawei’s $2,800 Mate X2, while still sporting a bunch of high-end features and a similar design. Like the Z Fold 2 and the Mate X2, Xiaomi settled on an inward folding flexible 2480 x 1860 OLED screen that measures 8.01-inches diagonally, but unlike its competitors, Xiaomi saved a few bucks by limiting the screen to just 60Hz instead of 90Hz or120 Hz. When closed, the Mi Mix Fold comes with a 2520 x 840 6.52-inch OLED screen on the exterior of the device and can be used for simple tasks like responding to texts, checking a map, or skipping a track without fully unfurling its interior display. And unlike its main screen, the Mi Mix Fold’s exterior display does support a faster 90Hz refresh rate.

The Mi Mix Fold has a 108-MP main cam featuring a Samsung HM2 sensor, a 3-MP ultra-wide cam, and an 8-MP telephoto cam with a 3x optical zoom that comes equipped with the world’s first Liquid Lens technology in the telephoto camera. It is made out of a flexible film filled with transparent liquid. It can change its shape, just like the lens in the human eye, thanks to a precision motor. The liquid can function in extreme temperatures ranging from -40ºC to 60ºC (-40ºF to 140ºF). The lens offers 3x optical magnification (80 mm equivalent focal length) and has an 8 MP sensor sitting behind it, but there’s no word on optical stabilization. The advantage of the liquid lens over traditional designs is the ability to focus at just 3 cm for macro shots as well as focus at distant objects for zoom shots.  Xiaomi says the Mi Mix Fold’s liquid lens allows the telephoto camera to achieve a super close minimum focusing distance of just three centimeters, which means the telephoto cam can also double as a macro shooter. And to make sure that liquid lens is controlled properly, Xiaomi created an in-house ISP called the Surge C1 chip to deliver even better low-light, autofocus, and white balance performance.

Inside, the Mi Mix Fold flagship-level specs, include a Snapdragon 888 processor, up to 16GB of RAM, and as much as 512GB of onboard storage. Xiaomi also wisely included a large 5,020 mAh battery that’s split into two different sections, allowing for better weight distribution and faster charging speeds of up to 67 watts. The Mi Mix Fold also includes quad speakers tuned by Harman Kardon and an optional ceramic back for increased durability. Xiaomi developed a U-shaped hinge that is 27% lighter than the hinges used by other foldables. The phone was put through 200,000 bends during reliability testing then pushed further to 1 million bends. 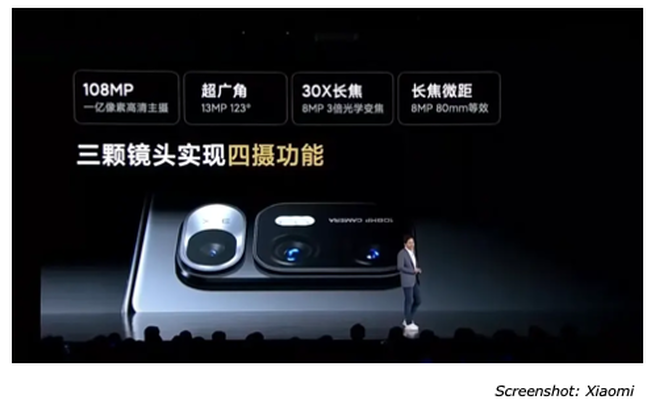 The OLED panel supports HDR10+ and Dolby Vision and offers great color accuracy (DCI-P3 color space). The display is rated at 600 nits of brightness with a peak of 900 nits. 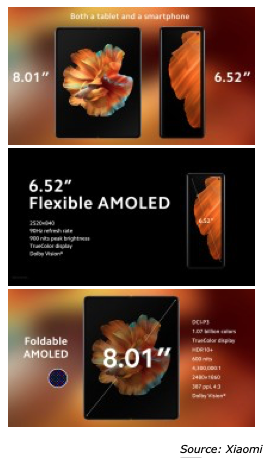 The Xiaomi Mi Mix Fold’s external display measures 6.52”, it is an AMOLED panel with 840 x 2,520 px resolution. That is a rather wide aspect ratio of 27:9. Unlike the interior display, this one has a high refresh rate – 90 Hz, plus 180 Hz touch sampling rate. Also, it is slightly brighter with 650 nits typical brightness. It supports HDR10+ and Dolby Vision, plus it has excellent color calibration as well.

Those are good stats for a first generation product, but the camera overshadows the display in terms of innovation. First off, this is the result of a CNY 140 million investment in R&D and was in development for two years.
The Surge C1 image processing chip was developed by Xiaomi. It runs the 3A algorithms – Auto Focus, Auto Exposure and Auto White Balance – in a power efficient manner. 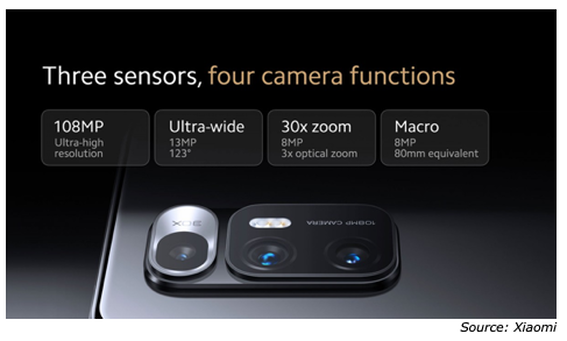 The phone is equipped with a 5,020 mAh battery that is split into two 2,460 mAh cells. It supports 67W wired charging, which completes a full charge in 37 minutes (no wireless though). 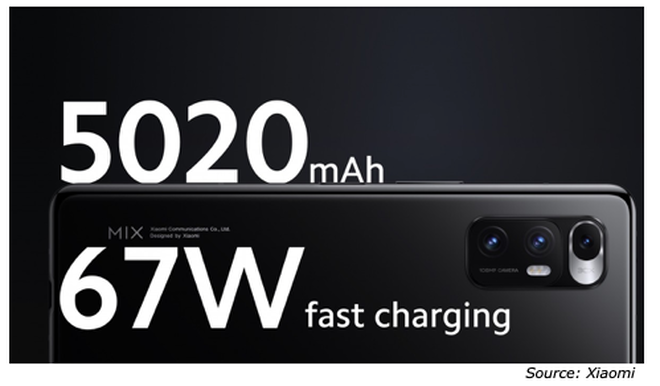 High performance is ensured by the “butterfly-type” cooling system, a combination of a large vapor chamber, thermal gel and multiple layers of graphite sheets. All told, the Fold boasts 22,583 mm² of total heat dissipation area. It’s not just for the chipset, the cooling system also expels heat coming from the 5G antennas and the fast charging system.

The visual spectacle of the large display is matched by the Harman Kardon tuned audio experience. It has a quad speaker setup, something reserved for tablets until now. The four 1216 super linear speakers have large “1.34 cc-equivalent” chambers. They are driven by 15V amps, which makes them 40% louder than the Mi 10 Pro speakers (which also used the 1216). Xiaomi developed a 3D special audio algorithm that creates an immersive experience using the four speakers. The standard version of the phone has a Gorilla Glass back with a ceramic texture. There is also a Ceramic Special Edition, which has a black ceramic back (with laser engraving), plus gold mid-frame and volume buttons. The Mi Mix Fold comes in a Standard and a Ceramic Edition. The first units will be available from April 16. The 12/256GB model starts at CNY10,000 ($1,520/€1,300), the next step is 12/512GB at CNY11,000 and, finally, the top end 16/512GB model for CNY13,000.