Vertical Divider
Mate X2 Arrives w/Inner Folding at a $2750 Price Tag
​
Huawei is back with a new foldable device called the Mate X2. The foldable smartphone comes with an inward folding design different from that of its siblings. It also has Huawei’s most powerful mobile processor, two high refresh rate displays, and a Leica-branded camera setup that surpasses that of the Mate 40 Pro, plus a high price tag. 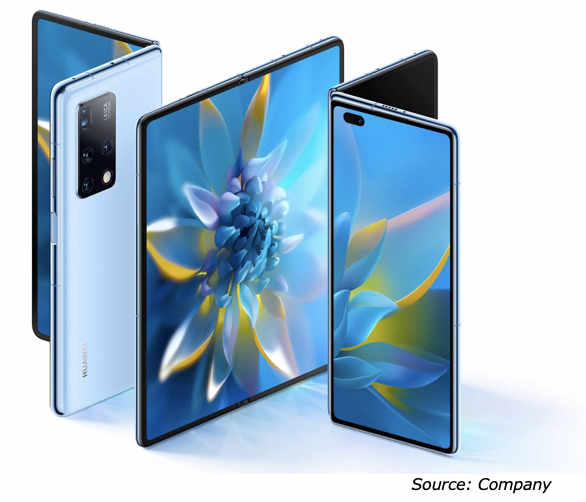 Huawei Mate X2 Design
Ditching the outward fold design of the Mate X and Mate Xs means that the Mate X2 has two displays – an outer screen that looks like a smaller and flat version of the Mate 40 Pro’s own screen and an inner display that is devoid of a notch or punch hole. The device has a new hinge design, using zirconium-based liquid metal for the hinge system, which they claim gives the Mate X2 a seamless fold The right half of the device slopes inwards while the left part slopes in the opposite direction. Huawei says that the advantage this brings is that the phone is perfectly balanced whether unfolded or folded even though the point of balance is no longer at the center and there are no gaps when the device is folded unlike the Galaxy Z Fold 2. 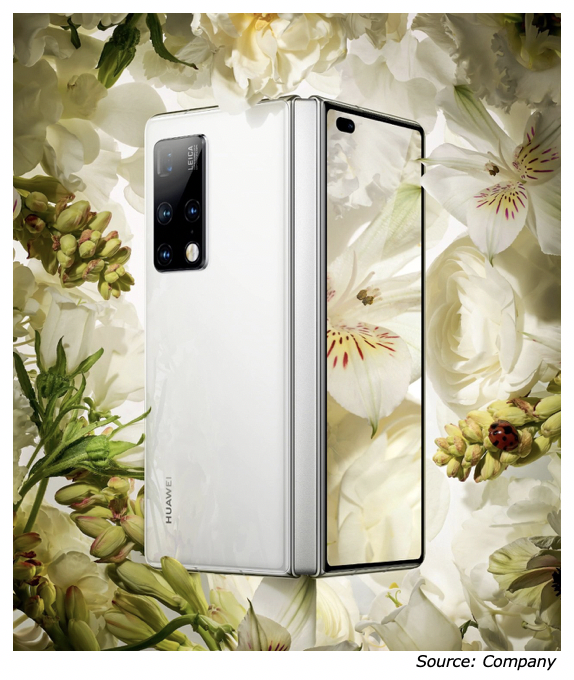 The Mate X2 comes in four different color finishes: Glaze White, Black, Crystal Blue, and Crystal Pink. The Huawei Mate X2 has a 6.45-inch OLED external screen that has a pill-shaped punch hole at the top left corner for two front-facing cameras. The display has a 2700 x 1160 resolution (456 ppi), a 90Hz refresh rate, and a 240Hz touch sampling rate. The inner OLED display is 8-inches in size when unfolded and with 2480 x 2200 resolution (413 ppi) and a P3 wide color gamut. It has a 90Hz refresh rate, but its touch sampling rate is lower at 180Hz. Previously, we reported that the OLED displays will come from BOE and not Samsung as originally planned.
There is a Kirin 9000 processor with 8GB of RAM and 256GB or 512GB of storage. Huawei has added support for storage expansion (256GB max) via its proprietary NM card slot. The Mate X2 has a side-mounted fingerprint scanner, stereo speakers, dual-band Wi-Fi, Bluetooth 5.2, NFC, dual-frequency GPS, an infrared sensor, and a USB 3.1 GEN1 Type-C port. 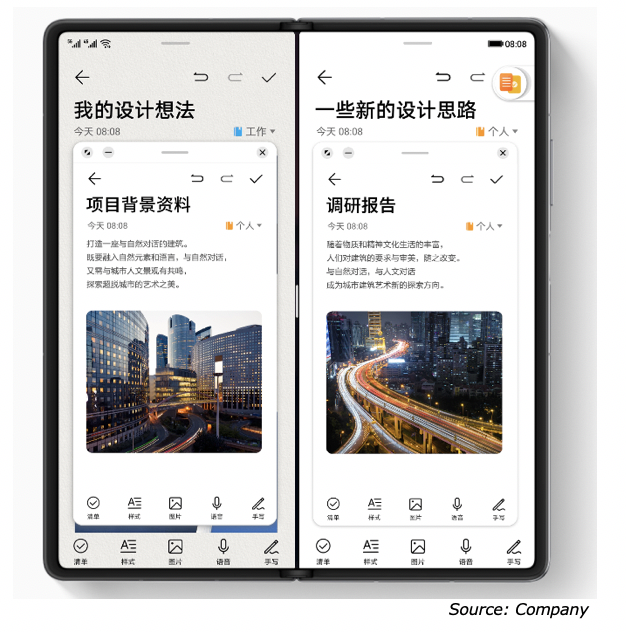 ​It supports two instances of the same app as demonstrated above.
The phone ships with EMUI 11 based on Android 10 out of the box. However, it says it will be upgraded to HarmonyOS in April. It also revealed that the top 200 apps have been optimized to take advantage of the phone’s form factor. Users will be able to minimize apps into bubbles, open two instances of an app for better multitasking, and more. There is no support for a stylus which would have given it an upper hand over the Samsung Galaxy Z Fold 2.
It has 4500mAh battery capacity inside with support for 55W fast wired charging, but there’s no support for wireless charging. Huawei ships the phone with its 66W Supercharger.

Huawei Mate X2 Camera
The camera configuration of the Huawei Mate X2 is unmatched when it comes to foldable smartphones. The main camera is a 50MP f/1.9 RYYB sensor with OIS and it comes along with a 16MP f/2.2 ultra-wide-angle camera, a 12MP f/2.4 telephoto camera with OIS, and an 8MP f/4.4 RYYB periscope camera that also has OIS and brings 10x optical zoom. The phone also has 100x digital zoom and a 2.5cm super macro mode. The Mate X2 has a 16MP front-facing camera but users can take super selfies with the rear cameras when the device is unfolded. In this mode, the external display serves as the viewfinder.