MagnaChip grew revenue and EPS by double and triple digits respectively in Q4, although the company got some help with this achievement. MagnaChip pointed to OLED adoption, 5G, and Power IC as some of the reasons why it can achieve its targets of double-digit CAGR and a gross margin of 30%. 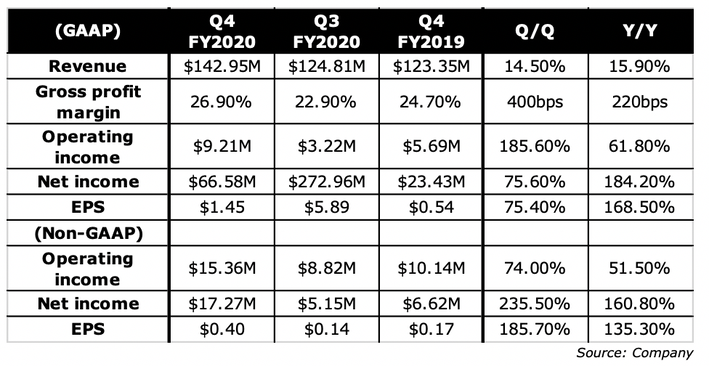 The Q420. Numbers were influenced by a $264.5M income gain in Q3 due to the sale of the Foundry Services Group and Fab 4 for $350.6M. There was a $47.1M income tax benefit in Q4. Both throw off the GAAP numbers for net income and EPS. The non-GAAP numbers for Q4 were impacted by a $43.9M adjustment for GAAP and cash tax expense difference. Fluctuations in foreign exchange also played a role. The forex gain of $13.3M in Q4 was higher than the gain of $8.99M in Q3, but it was lower than the gain of $21.9M the year before. Note that the numbers for Q4 FY2019 exclude the contributions from discontinued operations. Revenue was actually $200M if those are included. Use that number instead and revenue declined by 28.5% Y/Y. The table below breaks down revenue by segment. All business units contributed to growth. Display solutions grew by 9.6% Y/Y, power solutions by 23.9% Y/Y and foundry services by 33.2% Y/Y.

MagnaChip benefited from the global rollout of 5G services as it increased demand for 5G smartphones with OLED displays supporting high frame rates. From the Q4 earnings call: