TechRadar tested LTPO displays on the Galaxy S21 Ultra, OnePlus 9 Pro, and Oppo Find X3 Pro. Their Galaxy S21 Ultra reviewer wasn’t particularly impressed with the phone’s Quad HD / 120Hz refresh rate mode, saying that the phone’s 5,000mAh battery drained too quickly. However, he said that in 1080p mode, certain apps only require 11Hz, so the variable refresh rate on the phone guaranteed the battery to last all day. In a review of the OnePlus 9 Pro, reviewers said they didn’t notice that the adaptive refresh rate setting worked well, adjusted the display seamlessly, and the screen was running at a lower refresh rate. The battery life wasn’t long, but a 6.7-inch phone with a high-speed chipset with a capacity of 4,500 mAh, would certainly be much worse None LTPO.

Oppo Find X3 Pro also supports VRRs up to 120Hz, and reviewers said the mode worked well and frame drops weren’t noticeable. It worked pretty well in terms of battery life, but it drained much faster in heavy games and video recordings.
Overall, the LTPO display doesn’t save battery if apps or games that require 120Hz performance are being constantly used. But it makes slower refresh rate activity more energy efficient and eliminates the need to constantly activate or deactivate 120Hz mode for different apps.

The OnePlus 9T, like the 9 Pro, will also feature an LTPO display. Ross Young was quoted as saying, “The LTPO backplane will overtake LTPS of AMOLED smartphones on a $ US basis in 2023”

The report by Tech Radar is just another example of how the features of LTPO are misunderstood. combines a LTPS switching TFT with an IGZO driver TFT. The functional benefit is that LTPS is very stable so that there is little change in the threshold voltage over time.  Oxides TFTs, which have ~1/2 the mobility of LTPS and are not as stable, have low leakage current, which means that when the TFT is turned off the current flow to the OLED remains virtually the same over time. The benefit is that the current to sub-pixel doesn’t need to be updated if the data doesn’t change.  Since the driver uses power when it turns the switching TFT on and off, there is a savings of power consumption when the update doesn’t take place. The OLED power consumption is a function of the current applied and the time it is applied, so there is no power savings form the OLED.  Apple is crediting with inventing the concept and implemented first by LGD for the Apple Watch to support permit the always on feature.  SDC, which also supplies OLED displays for the Apple watch, later implemented the function  and has been the first to use it on smartphone displays. For smart watches the benefits are obvious; a black watch face is used, which for OLEDs uses no power, and the time is updated only once per minute, which is 1 Hz. The always-on display drops to 1Hz when not in use, but when tapped it pops up to 60Hz, extending battery life. It has also appeared on iPads since 2017 iPad Pro to support ProMotion. Panel makers also optimize their designs with more efficient capacitors and electrodes.  But the downside is that the # of masks are almost doubled compared to straight LTPS. More masks result in a need for more lithographic tools, which takes more space in the fab. Since an existing OLED fab’s space is optimized for the specific capacity, something has to give and a conversion from LTPS to LTPO can cut backplane capacity by up to 30% if there is not extra space.  Since, the thruput of the OLED deposition doesn’t change there is an imbalance in the array and OLED deposition and encapsulation processes.

Samsung claims that 10Hz operates at 40% power of 120Hz baseline, thus reducing power by 60%. Beyond making 120Hz a viable option for daily usage without major battery impact, the new technology should have the potential to improve power efficiency even beyond current 60Hz displays, which hopefully would usher in notably increased battery life in upcoming next-gen devices. Samsung’s key feature in achieving lower refresh-rate seems to be dubbed “LFD” or low-frequency-drive. LFD works solely at the display driver (DDIC) level. The LFD operating modes are programmed to work with Samsung’s low operating frequencies, all the way down to 1Hz. The low frequency driver operation also seems to be a sub-mode underneath the higher level VRR operating modes, with these being the actual modes that the phone switches between in a finer manner using the MIPI-DSI interface.

Samsung’s displays with LTPO are described as a VRR panel, with Samsung new refresh rate modes such as the ability to operate at 120, 60, 30 and 10Hz modes. The latter super-low refresh rates have previously never been used in smartphones. According to Samsung;

-- "Existing smartphone panels offer only a fixed refresh rate. They cannot automatically calibrate a phone’s refresh rate, which would result in image flickering caused by luminance differences at lower refresh rates. Samsung Display’s new backplane … technology eliminates flickering for operating frequencies as low as 10Hz." Samsung’s VRR workings, and whether it is a proper implementation of adaptive sync technology and if it has finer refresh rate granularity in the 10-120Hz beyond just the mentioned 60 and 30Hz rates is still unknown. In addition, a VRR implementation requires a deeper software stack integration into the OS, GPU driver and display driver to fully enable a seamless operation that would work transparently on any kind of static or low-framerate content. When in a dark environment, and forced into the 120Hz mode, the LTPO panel’s  power consumption isn’t all that different from an LTPS panel ~180mW power penalty that is present at all times, even on a black static screen, because of 120 Hz. That penalty comes from the measured power, with 640 mW and 465 mW in the respective 120 and 60Hz modes. Under a brighter ambient conditions, the panel showcases its technology advantages, and power consumption drops drastically. In the 120Hz mode but with the minimum refresh rate now in the regular '48 Hz' setting, the power figure drops from 640mW to 428mW, which is a massive 220mW drop. The 60Hz mode also sees a power benefit, as power consumption drops from 465 to 406 mW, indicating that LFD is working in the background and reducing the panel’s refresh rate to below 60Hz – although we have no way to accurately measure exactly how low it goes.

The phone operating under dark conditions seems to disable the 'seamless' variable refresh rate display, that allows the phone to go into lower frequency modes, but not in all circumstances 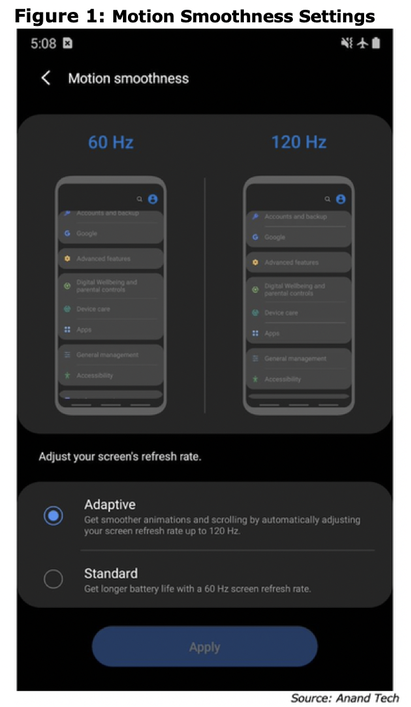 The device reverts into a low refresh rate as long as the on-screen content and brightness exceeds a certain level, even if the light sensor measures 0lux. However, it relies on the screen content too, which affects the screen brightness, as the phone will also jump between switching back into low-frequency mode or staying at a more power hungry high-frequency mode. In that instance, the refresh rate mechanism is based on the average picture level (APL) as well. Set at 120 Hz in user options, low ambient brightness (low lux) 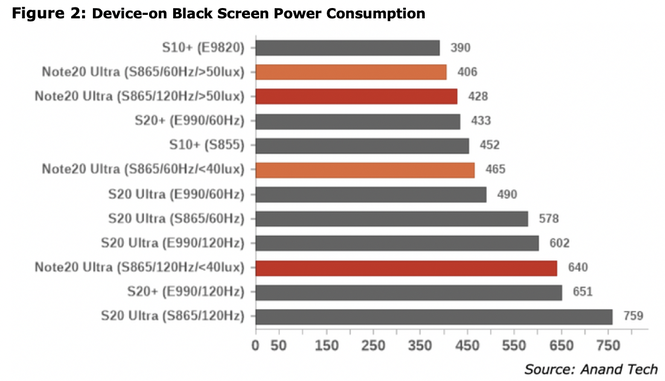 ​Each variant, due to Samsung's seamless VRR implementation (which is only seamless in high brightness and/or bright content), gives a different level of battery life.  It is worth nothing that the Note20 Ultra has a 10% smaller battery than the S20 Ultra, as well as a different processor - the new Snapdragon 865+ in the Note20 Ultra is more power hungry and less efficient than the regular Snapdragon 865 in the S20 Ultra. When it comes to the difference in the battery runtimes between running the phone in a dark or a bright environment, there are somewhat small difference. In the 60Hz maximum refresh mode, VRR/LFD gains the phone an additional 4% of battery life. In the 120Hz mode, we see a larger 8.5% jump in runtime. 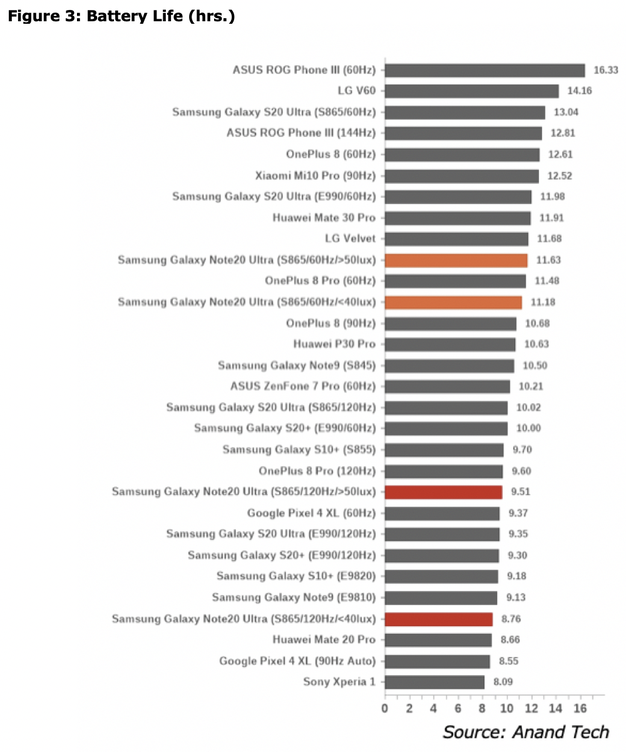 ​Looking at the power draw graph in PCMark in the 120Hz modes, there is a drop in power from an average of 1.937W to 1.796W at 200cd/m² screen brightness and no material difference during the video editing section of PCMark, with the power results been the two modes falling within 21mW. What this points out to is that in more regular non-video content the battery life gains could be larger than what’s experienced here in this battery test. 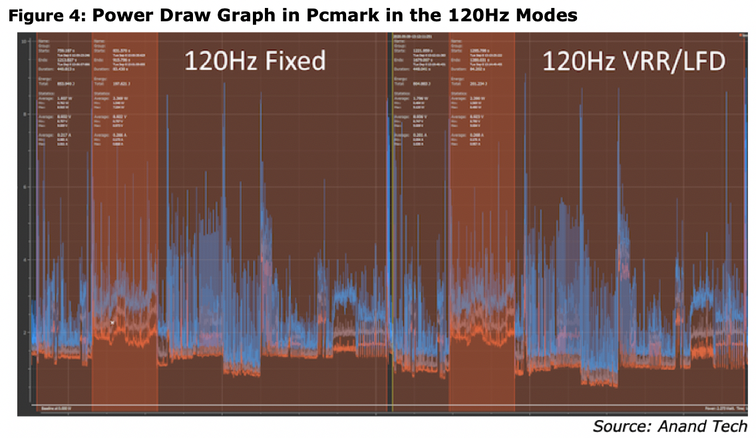