The March 5-11 plenary sessions of the two organizations that make China’s national-level political decisions introduced a range of important policies which will have a significant impact on the domestic economy and society, including national and local budgets, the ambitious 14th ‘Five-Year Plan’, and initiatives in areas such as financial regulation, job creation, manufacturing, poverty alleviation and climate change. Commonly known as the ‘Two Sessions’ in China, these annual sessions are organized by the National People’s Congress (NPC) and the National Committee of the Chinese People’s Political Consultative Conference (CPPCC).

China pledged to increase R&D spending by more than 7% per year between 2021 and 2025, increasing the share of R&D spending to GDP to the highest point in the last five years. China’s spending on R&D climbed 10% to 2.44 trillion yuan ($378 billion) in 2020, accounting for 2.6% of GDP. The country’s R&D budget eclipsed the EU’s budget last year and is projected to reach the US’s 2018 levels (the most recent year for which the data is available) by 2025. 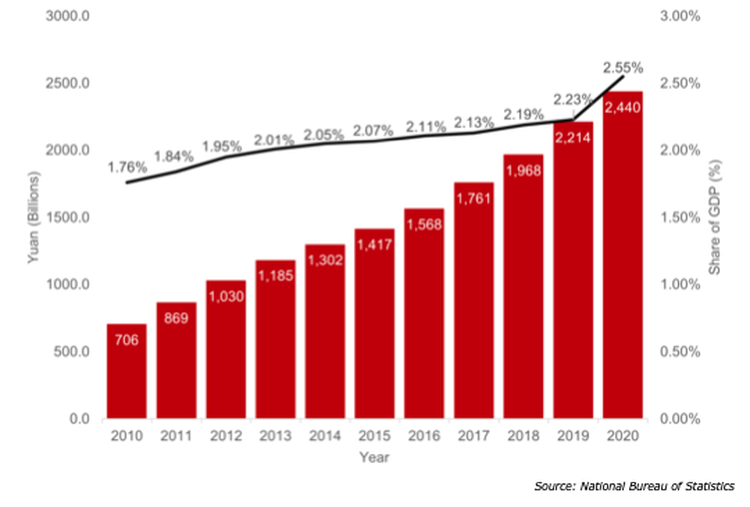 President Biden at his 1st press conference on 3/25 said that the biggest challenge in US/China relations was that the US was being outspent by China in R&D and it was crucial to increase annual R&D investments.

China Development Bank (CDB), a policy lender that finances high-priority government programs, has pledged 400 billion yuan ($62 billion) of loans in 2021. The bank’s chairman, Zhao Huan, said at a press conference that the program would include 100 leading companies in the field of technological innovation, while 1,000 firms along the upstream and downstream industrial chains would be offered special financial services support. CDB is allocating resources to China’s semiconductor industry amid the intensifying US-China tech war. Zhao said the China Integrated Circuit Industry Investment Fund had raised 200 billion yuan and fully entered the investment stage, which is greater than TSMC, budgeted for capital spending in 2021 – $28 billion (compared to $17.2 billion in 2020).

The ‘Made in China 2025’ plan received a huge backlash from American and European policy circles, the policymakers in China have decided to all but shelve it. The ‘Sci-Tech Innovation 2030’ strategy gained momentum in 2020 and received significant coverage during the Two Sessions. The strategy is part of a broader roadmap to enable China to become a leading global innovation engine, catch up with the average income level of developed countries, and showcase strength in areas like the economy, global governance, soft power and green development.
Resources and policy priority will be given to seven critical areas – artificial intelligence, quantum computing, integrated circuits, aerospace, neuroscience, genetics and biotechnology research.

‘Fundamental research’ a field of scientific research that leads to new knowledge breakthroughs and is seen as a key to advancements in technology, where China lags the US the most was often mentioned in the report. China spent 150 billion yuan ($23 billion) on fundamental research in 2020. In contrast, the US spent $97 billion, or 17% of the total US R&D expenditure in 2018. China’s five-year plan expects the spending on fundamental research to be 8% of all R&D spending in the years to 2025.

With the country turning in record-high trade surpluses – 2.117 trillion yuan ($325 billion) just in the last three months of 2020, comes against the backdrop of developed countries around the world reviewing their supply chains amid worries over reliance on foreign countries for key supplies, particularly since the Chinese had lockdowns and border closures due to COVID-19 revealed weaknesses in many nations’ supply chains. China will double down on investing considerable bureaucratic and financial resources on upgrading and digitizing the country’s already-dominant manufacturing base, focusing on building a more resilient and flexible industrial chain as an important foundation for the economy.

Initiatives such as computer vision, robotics, clean energy, autonomous vehicles, cloud computing and 5G have been recognized as crucial to increasing the efficiency and productivity of factories across the country. Collectively these advancements are intended to have the effect of gaining a ‘beachhead’ in the next phase of global industrial development, upon which more innovative products and services can be incubated.

The Two Sessions was attended by some 3,000 delegates from all walks of life. Some of China’s top leaders in the tech industry are among the delegates of the NPC and CPPCC. They put forward their proposals in advance of the meetings, some of which eventually become legislation. Although some of the tech leaders’ proposals are suspected to be for ‘corporate promotion’, big tech companies do deal with specific technologies in business.