MIT researchers have carried out an exhaustive analysis of the studies1 that observed the decline in the lithium battery prices, which are the dominant rechargeable technology in today’s world. The new study looks back over three decades, including analyzing the original underlying datasets and documents whenever possible, to arrive at a clear picture of the technology’s trajectory. The cost of the rechargeable lithium-ion batteries used for phones, laptops, and cars has fallen dramatically over the last three decades and has been a major driver of the rapid growth of those technologies. But attempting to quantify that cost decline has produced ambiguous and conflicting results that have hampered attempts to project the technology’s future or devise useful policies and research priorities. 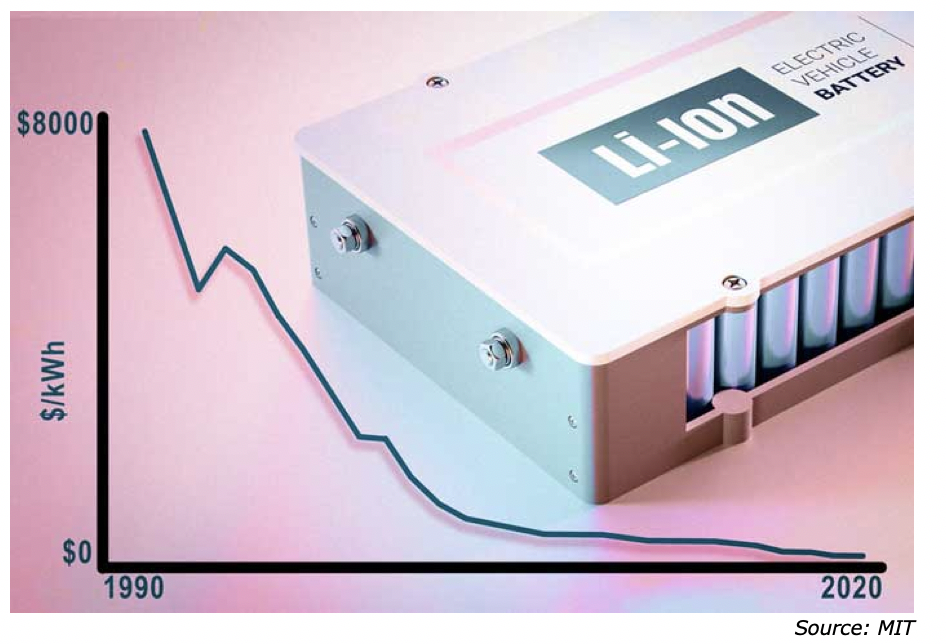 The researchers found that the cost of these batteries has dropped by 97% since they were first commercially introduced in 1991. This rate of improvement is much faster than many analysts had claimed and is comparable to that of solar photovoltaic panels, which some had considered to be an exceptional case. The new findings are reported in the journal Energy and Environmental Science,2 in a paper by MIT postdoc Micah Ziegler and Associate Professor Jessika Trancik.

While it’s clear that there have been dramatic cost declines in some clean-energy technologies such as solar and wind, when they started to look into the decline in prices for lithium-ion batteries, Trancik says, “we saw that there was substantial disagreement as to how quickly the costs of these technologies had come down.” Similar disagreements showed up in tracing other important aspects of battery development, such as the ever-improving energy density (energy stored within a given volume) and specific energy (energy stored within a given mass). 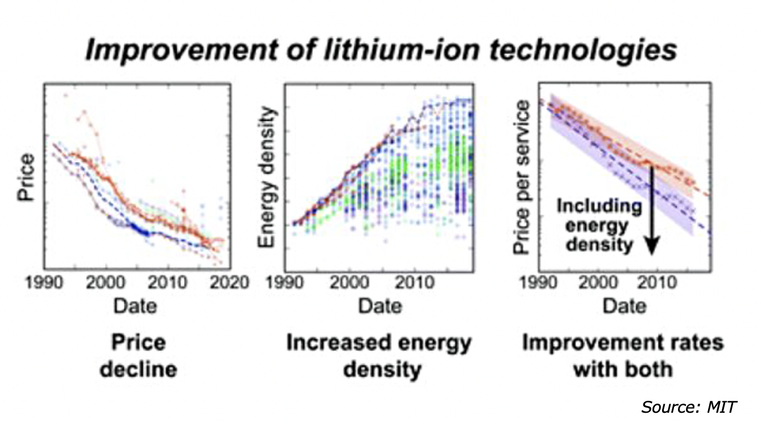 “These trends are so consequential for getting us to where we are right now, and also for thinking about what could happen in the future,” explains Trancik, who is an associate professor in MIT’s Institute for Data, Systems and Society. While it was common knowledge that the decline in battery costs was an enabler of the recent growth in sales of electric vehicles, for example, it was unclear just how great that decline had been. Through this detailed analysis, she says, “we were able to confirm that yes, lithium-ion battery technologies have improved in terms of their costs, at rates that are comparable to solar-energy technology, and specifically photovoltaic modules, which are often held up as kind of the gold standard in clean-energy innovation.” It may seem odd that there was such great uncertainty and disagreement about how much lithium-ion battery costs had declined, and what factors accounted for it. However, in fact, much of the information is in the form of closely held corporate data that’s difficult for researchers to access.

In addition to helping boost the ongoing electrification of transportation, further declines in lithium-ion battery costs could potentially also increase the batteries’ usage in stationary applications as a way of compensating for the intermittent supply of clean-energy sources such as solar and wind. Both applications could play a significant role in helping to curb the world’s emissions of climate-altering greenhouse gases. “I can't overstate the importance of these trends in clean-energy innovation for getting us to where we are right now, where it starts to look like we could see rapid electrification of vehicles, and we are seeing the rapid growth of renewable-energy technologies,” says Trancik. “Of course, there's so much more to do to address climate change, but this has really been a game-changer.”

The new findings are not just a matter of retracing the history of battery development, but of helping to guide the future, Ziegler points out. Combing through all of the published literature on the subject of the cost reductions in lithium-ion cells, he found “very different measures of the historical improvement. And across a variety of different papers, researchers were using these trends to make suggestions about how to further reduce costs of lithium-ion technologies or when they might meet cost targets.” But because the underlying data varied so much, “the recommendations that the researchers were making could be quite different.”
Some studies suggested that lithium-ion batteries would not fall in cost quickly enough for certain applications, while others were much more optimistic. Such differences in data can ultimately have a real impact on the setting of research priorities and government incentives. The researchers dug into the original sources of the published data, in some cases finding that certain primary data had been used in multiple studies that were later cited as separate sources, or that the original data sources had been lost along the way. And while most studies have focused only on the cost, Ziegler says it became clear that such a one-dimensional analysis might underestimate how quickly lithium-ion technologies improved. In addition to cost, weight and volume are also key factors for both vehicles and portable electronics. So, the team added a second track to the study, analyzing the improvements in these parameters as well. “Lithium-ion batteries were not adopted because they were the least expensive technology at the time,” Ziegler says. “There were less expensive battery technologies available. Lithium-ion technology was adopted because it allows you to put portable electronics into your hand, because it allows you to make power tools that last longer and have more power, and it allows us to build cars” that can provide adequate driving range. “It felt like just looking at dollars per kilowatt-hour was only telling part of the story,” he says.

That broader analysis helps to define what may be possible in the future. Ziegler adds, “We’re saying that lithium-ion technologies might improve more quickly for certain applications than would be projected by just looking at one measure of performance. By looking at multiple measures, you get essentially a clearer picture of the improvement rate, and this suggests that they could maybe improve more rapidly for applications where the restrictions on mass and volume are relaxed.”
Trancik adds the new study can play an important role in energy-related policymaking. “Published data trends on the few clean technologies that have seen major cost reductions over time—wind, solar, and now lithium-ion batteries—tend to be referenced over and over again, and not only in academic papers but in policy documents and industry reports,” she says. “Many important climate policy conclusions are based on these few trends. For this reason, it is important to get them right. There’s a real need to treat the data with care, and to raise our game overall in dealing with technology data and tracking these trends.”
​
References
1. The work was supported by the Alfred P. Sloan Foundation.
2. This article is based on the paper: “Re-examining rates of lithium-ion battery technology improvement and cost decline.” You can read the study in its entirety at the following link: http://doi.org/10.1039/d0ee02681f.