Vertical Divider
Liquidity Driving Higher Deficits
​
The US budget deficit for fiscal year 2020, which ended 9/30/2020, was $3.1 trillion, the highest ever on record in dollar terms, and the highest relative to GDP since World War II. 2021’s deficit will be even larger. Before the bipartisan "stimulus" compromise passed in December, congressional budget scorekeepers estimated the fiscal year 2021 budget deficit at $1.8 trillion. With that additional $900 billion in spending, and the Biden Administration promoting an additional $1.9 trillion stimulus early this year, plus infrastructure, the budget deficit for FY21 should rise to least $4.0 trillion.


Last year, while the budget deficit was $3.1 trillion, the amount of debt held by the public increased $4.2 trillion, due to the effects of federal lending programs for students and small businesses. But the Federal Reserve increased it holdings of Treasury securities by $2.3 trillion. As a result, buyers outside the Fed had to purchase $1.9 trillion in federal debt, which wasn't substantially higher than $1.6 trillion they had to absorb back in 2009.

This year, with the Fed scheduled, according to its announcements, to buy $1.0 trillion in Treasury debt – the current pace is $80 billion a month – private buyers will have to absorb about $3.0 trillion in federal debt. This is substantially greater than last year and double the amount in 2009.

The world is awash in liquidity, much sovereign debt has negative yields, and the Fed may just increase its purchases of US Treasury debt. There is no consistent relationship between increased debt issuance and higher interest rates. In addition, by historical standards, the interest cost of the federal debt is still very low.

The idea that the US can spend and borrow like this indefinitely, with no consequences, will only lead to ruin. The US is moving into uncharted territory by increasing debt this rapidly. Last year, the Fed absorbed a large part of the increase in debt. This year, it looks like the Fed will absorb a much smaller share, which means the Treasury has to find many more buyers. Modern Monetary Theory – a belief that a country can print and spend at will – has never worked long term before and always ended up with significantly bad outcomes, which include devaluation and inflation.

In the short-term, a second year of fiscal profligacy should not cause serious problems for the economy. The 10-year Treasury yield to rise to around 1.5% by year end and then expect it to rise more in future years as inflation picks up. It is spending, not deficits themselves, that impact the economy. The surge in deficits to limit the COVID-19 emergency is unlikely to be followed by measures that control spending growth. A likely outcome is that the spending splurge will continue as the new administration seeks to implement Medicare-For-All, Student Debt Relief and Free College. 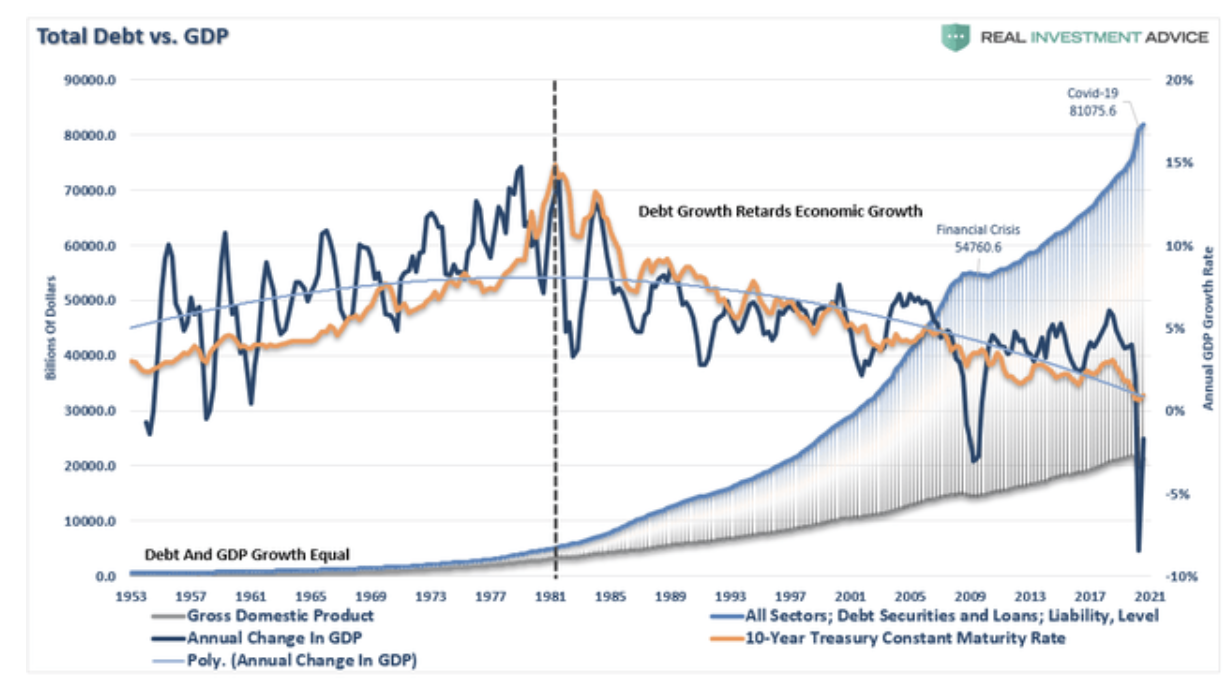