Corning and LG Innotek (LGI) been developing liquid lenses, a technology that operates without the moving parts that are needed to operate smartphone camera lenses.  By filling a flexible pouch with various fluids, the application of an electrical current to a transparent conducting material on one side of the lens can change the ‘shape’ of the lens, causing it to also change its focus.  The original technology was susceptible to freezing and a material reset was necessary to lower the freezing temperature of the lens liquids.

Liquid lens technology has no moving parts, eliminating the MEMs motors and other paraphernalia that are part of high-end smartphone lens technology, however, a liquid lens must be supplemented with a standard imaging lens to instantaneously adjust the camera’s focal length. Rather than using more typical lens mechanics, a liquid lens system can keep the physical lens static, using the liquid lens to do the focus adjustments, where the camera scans a variety of items of different sizes, while identifying marks or text.  In such systems without liquid lenses, the focal length of the inspection camera is fixed, and the items being scanned are all the same thickness.  If two items are on top of each other, the additional height will produce an image that is out of focus and could be mis-identified.  A liquid lens could eliminate systems that must verify images with multiple cameras with different focal lengths to make sure the item is correctly identified. 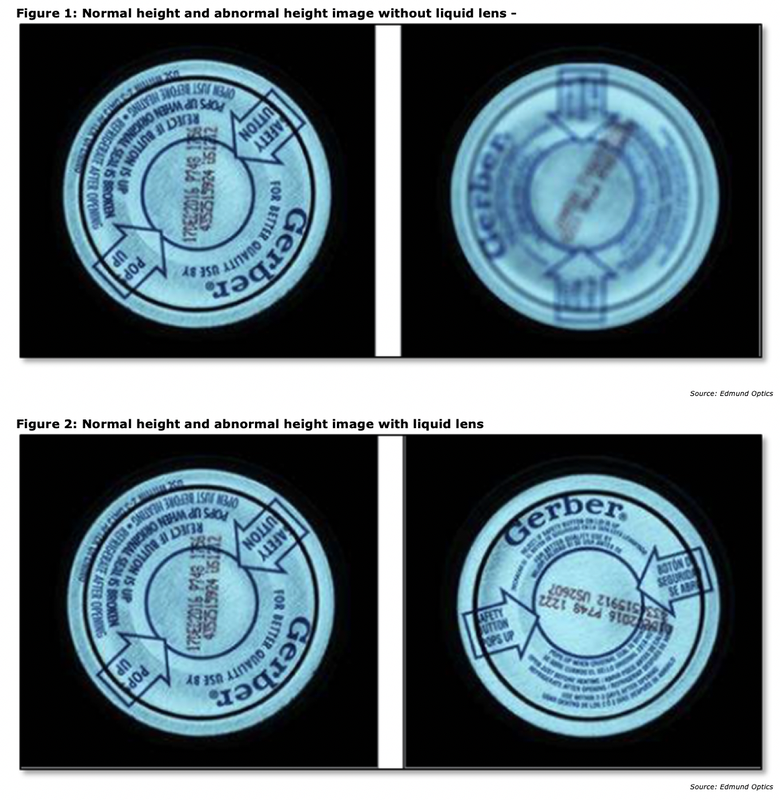 ​Liquid lenses unique are made of a combination of oil and water that is placed between glass or plastic.  As these liquids are immiscible, the oil covers the water and fills any space between the encapsulation materials.  A transparent conducting material is added to one side and by varying the voltage of the conductive material the water droplet can be made to change shape, and since there are no moving parts, the changes take place in milliseconds with no waiting for motors to adjust with the additional benefit of being almost infinitely adjustable, and unlike industrial cameras that start to wear out in weeks, they can cycle hundreds of millions of times before breaking down.  They are extremely energy efficient, can be focused at very short distances and are smaller than traditional mechanical adjustable lens systems, but because they are water based they can freeze, which can damage the lens.  Providing additives that reduce the freezing temperature is possible but insufficient for below zero degree conditions. 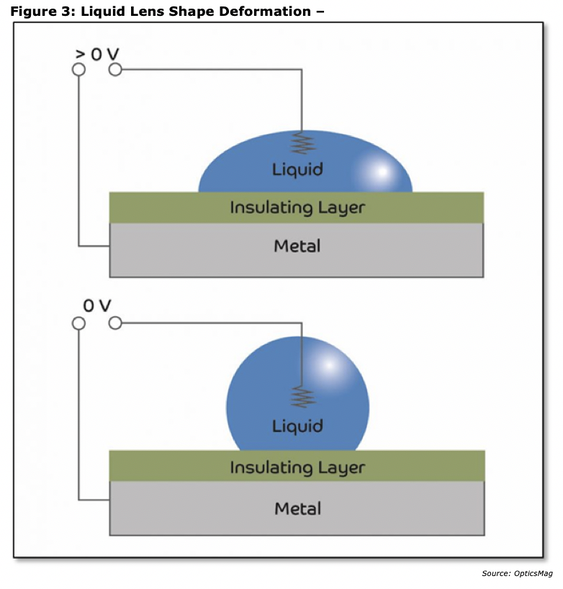 ​Liquid lens reduce the size and complexity of smartphone camera systems that currently use a series of stacked lens to perform necessary on-the-fly focus adjustments.  By reducing the size, power consumption and complexity of some of that stack, they hope to replace mechanical systems, which wear out more quickly. Of course, wearing out of the cameras mechanical system has not been a particularly significant issue.

With the adaptation of new materials to avoid the freezing problem, a recent test showed that if the lenses are used at pressure different from sea level, he curvature of the liquid lens is affected, and must be resolved before commercialization.