LiDAR (light detection and ranging) technology, mostly applied to the automotive electronics sector, is expected to be increasingly adopted for consumer electronics applications, according to industry sources. LiDAR measures distances by illuminating the target with laser light and measuring the reflection with a sensor, and differences in laser return times and wavelengths can be used to make digital 3D representations of the target.  Apple took the lead to adopt ToF (time of flight) LiDAR module for its iPad Pro released in the first half of 2020, and reportedly will incorporate the technology into some of its new iPhone models.  Besides adopting structured-light 3D face ID sensor at the front-side, some new iPhone devices are reportedly to feature rear ToF LiDAR scanner, with one iPhone requiring at least three VCSEL components as light sources, the sources continued.

This year’s iPhones will get the same kind of Sony lidar depth camera that Apple put in the 2020 iPad Pro it released in March. After planning the feature for years, the technology will show up in the top-tier “Pro” iPhone models Apple is set to announce this fall. This lidar system uses pulses of light to precisely measure the distances of objects from the camera lens. Using this data, the camera can autofocus more precisely, and better differentiate between foreground and background to create effects such as Portrait mode. The depth camera will also help augmented reality apps place digital objects within real-world settings more realistically.
Starting with 2017’s iPhone X, high-end iPhones already have a different type of front-facing 3D camera system, branded TrueDepth, which is used for Face ID authentication and Animoji. That system projects 30,000 infrared dots on the surface of the user’s face to form a 3D map of its contours. The system offers high levels of accuracy at less than a meter of distance, so it’s fine for measurements within arm’s length of the phone. The iPhone’s new lidar system will measure the distance of objects both close to the camera and far away. The system uses a “direct time-of-flight” approach, in which a Vertical Cavity Surface Emitting Laser (VCSEL) sends out bursts of photons. They travel at the speed of light to deflect off of objects or surfaces within the camera’s view. Some of the photons bounce back to a small sensor housed near the camera. Software then uses the time of their round trip to derive the distance of the objects or surfaces from the camera lens. It’s very similar to the way radar works, only lidar uses laser light instead of radio waves.
The iPhones on the market today get some sense of distance by measuring differences in their various cameras’ perspectives on an object. Since that difference (called “parallax“) is larger in nearby objects and smaller in faraway ones, it’s possible to estimate the objects’ distance. The lidar system, on the other hand, is purpose-built to measure depth and can do so far more precisely. This precise distance data is added to visual data collected by the phone’s other camera sensors, giving the camera a much better understanding of the objects in front of it. It can, for example, make objects in the foreground appear sharp and distinct from the features of the background, which the human eye would naturally see as a bit more blurry and ill-defined. Dialing in those nuances could help the iPhone’s autofocus function create far more true-to-life photographs, closer to those captured by a conventional camera with a full-sized lens. The main depth effect offered by current iPhones is Portrait mode, which gives photos the “bokeh” effect that blurs the background layer and places the foreground subject (a person, usually) in sharp focus. Sometimes, however, the software has trouble separating foreground from background. The addition of the depth camera data will go a long way toward fixing that. It may even make it possible to adjust the focus or blur of more than two layers in a photo.

The lidar system will also make AR experiences on the phone better. The depth data, along with additional data from the other camera sensors and motion sensors, will help the AR software more accurately place digital images within layers of real-world images seen through the camera lens. The lidar system can also bring more accuracy to tasks such as measuring spaces, objects, or people. For example, a medical rehabilitation AR app might use the depth data to more accurately measure the range of motion of a patient’s arm. 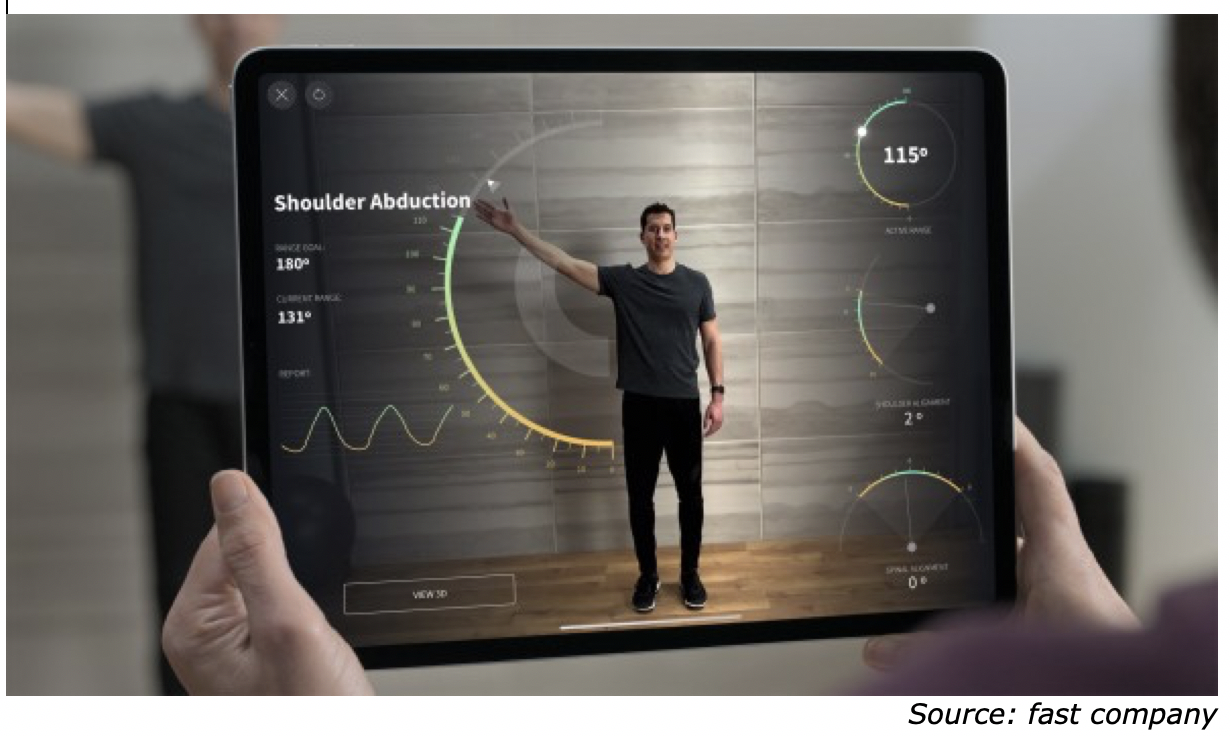 The Complete Anatomy app uses the iPad’s depth sensor to let physical therapists quantify the recovery of a normal range of motion in their remote patients. [Photo: Apple]“When you use AR apps without depth information, it’s a bit glitchy and not as powerful as it ultimately could be,” Andre Wong, Lumentum’s VP of 3D sensing, told me back in March. “Now that [Apple’s] ARKit and [Google’s] ARCore have both been out for some time now, you’ll see new AR apps coming out that are more accurate in the way they place objects within a space.” The sensor chip in the iPhone’s front-facing TrueDepth camera is provided by ST Microelectronics, and many in the industry believed that company would provide the sensor chip for this year’s iPad Pro. But over the past two years, Sony’s image sensor business has flowered as it has focused on developing CMOS (complementary metal-oxide-semiconductor) image sensors. In fact, Sony changed the name of its semiconductors segment to “Imaging & Sensing Solutions” in the second quarter of 2019 to reflect its new-found source of growth.

​A comparison of three different types of 3D sensing. [Image: Sony]The move was largely fueled by Sony’s development of advanced sensor technologies that integrate computer vision AI, and by its success in winning contracts to provide image sensors for mass-market smartphones. Sony provides the time-of-flight depth-sensing modules used in high-end Samsung and Huawei smartphones, in Apple’s iPad Pro, and now in the new iPhone Pro models.