LG’s Moderate Answer to Foldable Smartphones
February 02, 2020
​
The LG G8X ThinQ has a two-piece design — a standalone smartphone and a foldable case with secondary screen. This smartphone has a regular LG design with premium glass-metal construction and obstruction-free profile on the front and back. It boasts an IP68 rating for water and dust resistance and the phone is MIL-STD tested for shock resistance. The LG G8X ThinQ is neither heavy nor bulky and feels ergonomically quite appropriate. However, attached with a foldable case, it is a different story. The case is wide and bulky, and when attached, the smartphone feels heavy. The case is sturdy and has a good leatherette feel to it. It connects with the smartphone through a USB type-C port, and has a pogo-pin charging connector that comes bundled in the box. Though the case is easy to open and supports a 360-degree movement, its wide profile makes it difficult to operate using just one hand. The case has a smaller monochromatic screen on the front for a quick glance at information like time, date, caller ID and notifications. 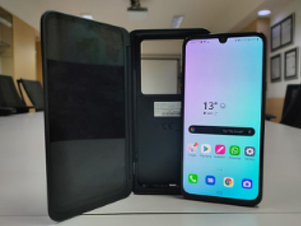 Source: Company
Given the low cost demand in India, the LG G8X ThinQ is the dual-display design, which allows it to work as a standalone device, much like any other smartphone, or as a foldable device (attached with the case) with dual displays working together. Both the displays are OLED units of a 6.4-inch screen estate; they have a full HD+ resolution and 19.5:9 aspect ratio. For on-screen content consistency, each screen has a waterdrop-shaped notch on top. However, the notch area on the primary screen features the phone’s front camera, whereas the secondary screen’s notch area is blank. Both screens are bright and vivid, and tuned to render warm color tones by default. The dual-display design enables easy multitasking by allowing two different supported apps to work simultaneously (one app on each screen). Attached with the case, the phone’s primary screen shows a floating widget to activate the secondary display, swap on-screen content displayed on each screen, move content between screens, and switch off the secondary display to save battery.

Source: Online
The phone also allows extending the primary display on secondary (wide view). However, this feature is limited to select web browsers only. Another use for the dual-display case is gaming. LG has designed an onscreen game controller (gamepad), which seems to be a digital iteration of physical game controllers. It has action buttons, trigger buttons, D-Pad, etc. While there are several pre-loaded modules for different game genres, there is also a provision to make a custom one for games that do not support the existing modules. However, the combination does not feel polished and leaves you asking for more. This is partly due to the Android operating system and its applications ecosystem, neither of which currently supports a dual-screen platform. The phone has a dual-camera set-up on the back, featuring a 12-megapixel primary sensor of an f/1.8 aperture and a 13MP ultra-wide sensor of an f/2.4 aperture. The primary camera supports dual pixel phase detection autofocus and optical image stabilization. On the front, the phone has a 32MP selfie shooter, which supports the pixel-binning technology to take photos at an effective megapixel count equivalent to 8MP. The phone’s dual rear cameras are satisfactory at best. In day light, the primary sensor takes decent shots with ample details. However, the output shows traces of a soft purple color across the frame. Similarly, the ultra-wide shooter does its job of capturing wide frames without barrel distortion, but the output lacks sharpness and there are softer-looking frames. In low light, the dual rear cameras struggle to find right exposure values. As a result, you end up getting inconsistent results. The LG G8X ThinQ is powered by the Qualcomm Snapdragon 855 system-on-chip, mated with 6GB RAM and 128GB internal storage. The phone’s performance is sleek, and it handles everyday tasks without stutters. It boots Android 9 Pie operating system-based LG UI, which looks neat and is easy to use.
Powering the phone is a 4,000 mAh battery, which is good for single-day usage. Though the phone supports fast charging, the charging time is slow — it takes more than two hours for the completely drained out battery to charge to 100 per cent.
experience something fresh, but do not keep your expectations too high.

LG Electronics has been slow to use OLED displays and has delayed releasing a foldable display although the technology has been available from LG Displays for at least 5 years. The company reacted to the Fold by releasing a dual display phone as described above.  However, their engineers have not been sitting on their hands as they have submitted a number of patent applications to WIPRO for a ‘rollable mobile phone’. It is a roll-up smartphone that is equipped with a large flexible touchscreen. The design has been published by LetsGoDigital . 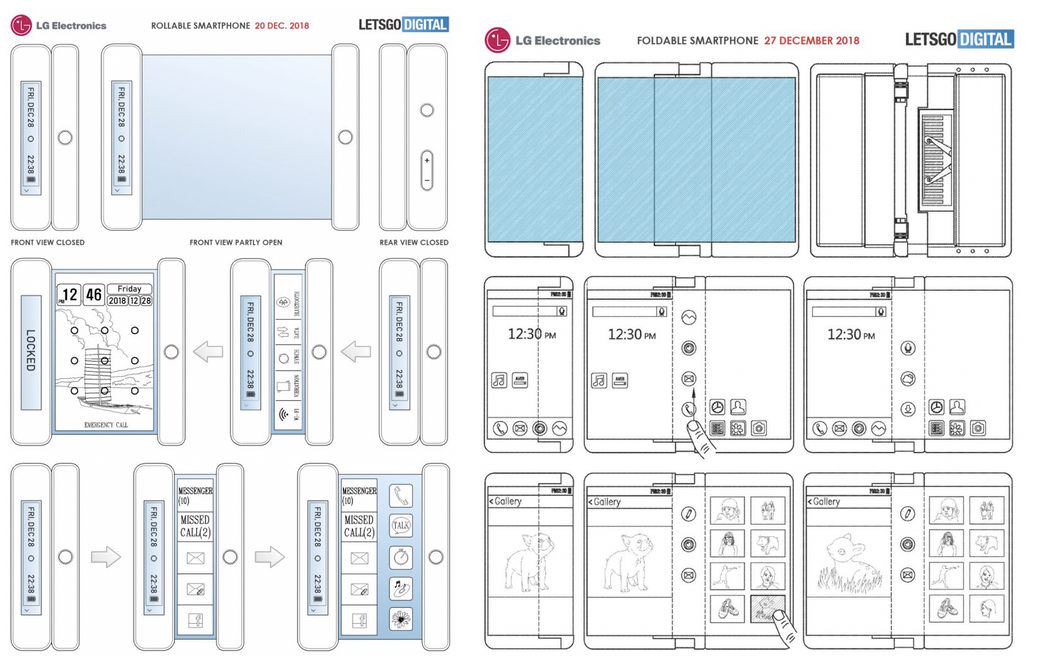 The first, and perhaps the strangest, came to light in a December 2018 patent. It could be described as a rolling telephone capable of extending to reach the dimensions of a tablet. It has a small screen on edge to show notifications, date, time and battery charge. This other one has the format of a normal telephone when folded. However, it has a huge two-spring mechanism to extend the panel to one side. It seems robust and leaves no gap when closed. With cameras on both sides, you can take stereoscopic photos to achieve a three-dimensional effect. The more striking view comes from this folding triptych type smartphone with two screens, one of them is flexible. When fully deployed, it has an area larger than that of the folding devices already available, but by having two hinges, in two movements, you can reduce its size to that of a normal telephone.

Source: LetsGoDigital
This design has a single flexible screen the size of a tablet, but it can fold over two folds until it reaches the size of a phone. Besides, it comes with a stylus to take advantage of that duality tablet-phone.
In this other concept, the folding screen is removable. It is a flexible panel that can be attached to the main screen of the device as if it were a case. The accessory supports different configurations, either using the deployed secondary display or in half, hiding the other half behind the phone. Finally, this July 2019 patent describes a foldable phone with an enveloping screen and an accordion hinge. The funny thing is that it has a large edge above, which makes it difficult to grip in the natural position of the phone.